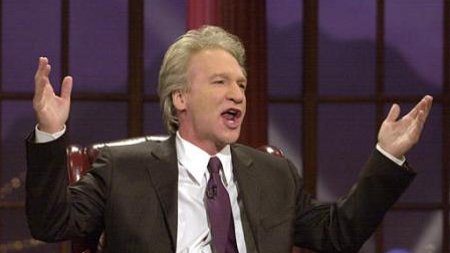 Bill Maher makes no secret of his contempt for religion. Via his comedy routines, his political commentary, his film Religulous, and his duties as host of Politically Incorrect and now HBO’s Real Time, Maher has long warned of the dangers and exploitation of organized religion and how incompatible dogma and doctrine are with the scientific enlightenment of modern society.

Inadvertently and less eloquently paraphrasing Voltaire, who once wrote that “Those who can make you believe absurdities, can make you commit atrocities,” Maher has said that the belief in religion, which he calls “a neurological disorder,” in our society “stops people from thinking” and “justifies crazies.” In a 2008 interview with Larry King, Maher stated that religion is “the ultimate hustle.” 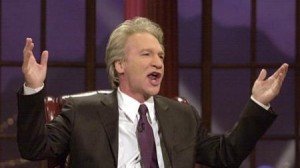 Maher’s critique (or outright bashing) of religious doctrine, dogma, and zealotry is admirable – or would be, if only he weren’t such an arrogant hypocrite. While Maher himself claims to be “an equal opportunity offender” who thinks that “all religion is stupid and dangerous,” he clearly believes that some faiths are more equal than others. Even though his condemnation of Christianity, notably Catholicism, has won him the animus of bible-thumping bigots like Catholic League head William Donahue and he has excoriated the intolerance of Pat Robertson and reveled in the death of Jerry Falwell, Maher has consistently saved his most virulent attacks for Islam and its followers.

While, in Maher’s estimation, Jews are somewhat quaint and silly and Christian dogma relies on outrageously absurd fairy tales, Muslims – as a rule – are all brainwashed and violent. Whereas other religions are sometimes co-opted by a minority of extremist elements that represent misguided fundamentalism, Islam, according to Maher, is inherently radical and terroristic. For example, during a February 2007 broadcast of Real Time, Maher stated,

“[Religions] are not all alike! [Islam] was extremist to begin with. Mohammad was a warrior. The big lie is that all religions are basically alike. They all preach the same thing. Well, of course the Bible is full of a lot of violence. I mean, God in the Old Testament is a psychopath – he just kills, kills, kills, for no reason, good reasons, bad reasons, he’s jealous, he just wants to kill…But he doesn’t seem to aim it so much at outsiders. He wipes out the Jews except for Noah because they were bad to him or whatever. But he doesn’t keep saying…it seems to me that in the Qur’an, God keeps saying, if you’re not one of us, you’re an infidel, and burning would be too good for you.”

With this unusual statement, Maher clearly demonstrates a striking level of ignorance about both the Qur’an and Judeo-Christian scripture, particularly the Old Testament, especially for someone who talks about religion all the time and then made a movie about it. The Old Testament manifestly overflows with divinely-mandated genocide and the deliberate ethnic cleansing of non-believers in the so-called Holy Land. Take the mythology of Exodus, which sees Yahweh deliver his people from Egypt and promise them a land “flowing with milk and honey.” (Exodus 3.7-8) What is commonly left out of this uplifting tale of deliverance, freedom, and chosen-ness is the rest of Verse 8, which states plainly that this promised land was already “the country of the Canaanites, the Hittites, the Amorites, the Perizzites, the Hivites, and the Jebusites.” As such, due to the inconvenient presence of a large and diverse indigenous population of non-Hebrew peoples, Yahweh declared to Moses and his followers:

“When my angel goes in front of you, and brings you to the Amorites, the Hittites, the Perizzites, the Canaanites, the Hivites, and the Jebusites, and I blot them out, you shall not bow down to their gods, or worship them, or follow their practices, but you shall utterly demolish them and break their pillars in pieces.” (Exodus 23.23-24)

“When Yahweh your God brings you into the land that you are about to enter and occupy, and he clears away many nations before you — the Hittites, the Girgashites, the Amorites, the Canaanites, the Perizzites, the Hivites…and when Yahweh your God gives them over to you…you must utterly destroy them…Show them no mercy…For you are a people holy to Yahweh your God; Yahweh your God has chosen you out of all the peoples on earth to be his people, his treasured possession.”(Deuteronomy 7.1-11)

Moses certainly took God’s orders to heart, as he later told his followers:

“But as for the towns of these peoples that Yahweh your God is giving you as an inheritance, you must not let anything that breathes remain alive. You shall annihilate them—the Hittites and the Amorites, the Canaanites and the Perizzites, the Hivites and the Jebusites—just as Yahweh your God has commanded, so that they may not teach you to do all the abhorrent things that they do for their gods, and you thus sin against Yahweh, your God.” (Deuteronomy 20.16-18)

Furthermore, the inhabitants of Jabesh-Gilead, including “the women and the infants” were slaughtered by a 12,000-strong army of marauding Hebrews (Judges 21:10) and, as revenge for waylaying the Israelites as they returned from Egypt, Yahweh ordered his people to “go and strike the Amalekites and totally destroy everything that belongs to them. Do not spare them, but kill men and women, children, infants and suckling, cattle and sheep, camels and donkeys.” (1 Samuel 15:2-3) Needless to say, there are many more examples of Hebrew aggression throughout the Bible (read about the exploits of Joshua, Aaron, David, Elijah, and Samson, for example), all of them commanded by the Lord Almighty, and all of them against non-Jews. So much for Maher’s contention that the Hebrew god “doesn’t seem to aim [his murderous wrath] so much at outsiders.”

(Incidentally, Maher also appears to be ignorant of certain Muslim rules of engagement, found within the Qur’an, Hadith, and Sunnah, that expressly prohibit the killing of women, children, and the elderly, the cutting or burning of trees or orchards, the slaughter of livestock except for food, and the pillaging, plundering, or destruction of residential areas. Clearly, Yahweh’s own battle conventions were far less strict and more closely resemble the tactics of the Israeli military.)

Perhaps Maher’s decision to turn a blind eye to the atrocities committed by the biblical Hebrews upon the indigenous people of the Levant, in favor of demonizing Islam and its adherents, should not be surprising considering his outspoken support for Zionism and the fact that he is a self-avowed “big supporter of Israel,” who believes not only that “Israel is a democracy in a part of the world that has none” but also that American blood and treasure should be spent in order to ensure the continued existence of Israel as a Jewish state.

Almost a decade ago, in the midst of the Second Intifada in late 2001, Maher hosted a panel to discuss Israel and Palestine on his round table talk-show Politically Incorrect. Rather than act as moderator, though, Maher wholly represented the Zionist perspective, complete with revisionist history and the constant invocation of Zionist mythology. After attempting to contextualize his first question by claiming that 4.5 million Jewish Israelis, armed with superior weaponry and a nuclear arsenal, are surrounded by a sea of 280 million hostile, bloodthirsty Arabs, Maher asked, “What if for one hour…the Arabs had the ability to annihilate the Jewish state? Do you think things would be different? Do you think they would show the restraint that Israel has for over 50 years?” One can only wonder what kind of “restraint” Maher was referring to considering Israel’s history of asymmetric aggression, apartheid-style oppression, disdain for international law and human rights, and settler-garrison ethnonationalist policy.