Over the Moon for Orange Cows: Easing the Plight of Vietnamese Farmers 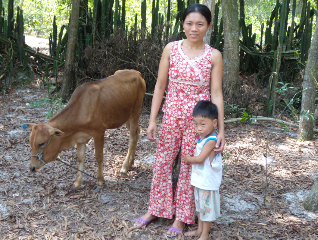 Bruce Montgomery, a former journalist with The Australian newspaper, has seen first-hand the damaging effects of Agent Orange upon families in central Vietnam.

In 2001, he visited the country with Vietnam veteran Don Killion and geologist Tony Brown and saw the work being done by returned U.S. Vietnam War veterans to provide relief to families whose livelihoods have been severely disrupted. Killion had been a medic working with American forces in the city of Hue in 1969. This provided the inspiration for the Vietnamese Victims of Agent Orange Trust (VVAOT), an Australian-based charity assisting local villagers affected by the deadly defoliant sprayed across much of Central and South Vietnam. 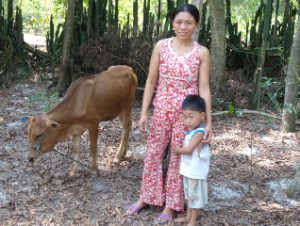 Since 2004, VVOAT has partaken in events designed to increase mobility and self-sustainability. The Orange Cows project has resulted in 122 cows being handed over to Agent Orange-affected individuals in three years, a role that has helped local communes improve their livelihoods. VVAOT arranges artificial insemination of the cows at breeding time so that the recipient family can keep the first calf, give the second to another Agent Orange-affected family in the commune, and keep the rest.

“The villagers are given two days’ training in caring for the cows, to be alert for the warning signs of trouble,” Montgomery adds.

In April, Montgomery travelled to Quang Loi commune in Quang Dien province for a handover of 32 cows. Montgomery says that locals spoke about the region’s “rich revolutionary spirit” as well as the devastation they have endured over the years.

For Montgomery, the delivery of the cows is about the locals’ right to a dignified existence amidst the carnage caused by Agent Orange’s aftermath on post-war generations of Vietnamese people.

“This is a very grass roots form of assistance. People learn about the Trust and plight of these people through the Internet,” says Montgomery. “Each time a project is completed, we arrange to buy the cows locally and fly to Vietnam at our own expense to supervise the handover.”

There is a strong bond between the cows and their owners. Montgomery says that in the past, there have been two cases where cows have died, one hit by lightning. In such an event, a calf is given to the family to compensate for the loss of their cow.

It is not just the delivery of cows and income generation that VVAOT sees as a priority. Wheelchairs have been provided to residents in desperate need so that individuals affected by Agent Orange no longer remain incapacitated. One recipient, a 58 year-old villager, declared that this simple wheelchair had transformed his life, and sent a note of thanks to Montgomery’s sister. “She is regarded as this man’s saviour,” Montgomery says.

Agent Orange is one of a range of herbicides and defoliants used by U.S. forces for “territorial advantage” to wipe out hiding places used by the Vietcong. Between 1961 and 1971, 49.3 million litres of Agent Orange were repeatedly sprayed as part of Operation Ranch Hand, wiping out rice crops and vegetation in the process in South Vietnam[1]. It has since seeped through the soil and infested water allotments and is known to cause a wide range of birth defects, various cancers and other symptoms such as leukaemia and Hodgkin Disease, cerebral palsy and nervous disorders. Up to four million Vietnamese residents are believed to have been affected by the spraying between 1961 and 1975[2].

For more than 30 years, Vietnam War veterans exposed to Agent Orange have been seeking compensation against a number of chemical companies for use, including the two largest manufacturers, Dow Chemical and Monsanto. Victims from Australia, New Zealand, Canada, the U.S. and South Korea have been awarded settlements. However, no Vietnamese victims have been issued any compensation. A victim’s rights group, the Vietnam Association for Victims of Agent Orange/Dioxin (VAVA) filed a class action lawsuit submitted on behalf of 27 Vietnamese victims of Agent Orange against chemical companies identified as manufacturers was dismissed in 2005 by Judge Jack Weinstein in Brooklyn District Court, New York.[3]

In a 233 page document, Judge Weinstein declared that while he accepted that Agent Orange was toxic, it was not deemed an herbicide, not a poison at its time of use and thus did not constitute a breach of international law, since the United States did not outlaw the use of herbicides until 1975 under the leadership of President Gerald Ford.[4] The ruling also stated that Agent Orange was manufactured by private companies who were not held liable for Agent Orange’s use in Vietnam by the government of the day. Also, the United States government claimed sovereign immunity and was not one of the parties being taken to court.

It seems that the people who have been most affected by the practices of a dirty war have been long forgotten, but acts such as the cows project and wheelchair handover show that organisations are still capable of banding together to assist those in most need. “It may be the only tangible contribution donors can ever make to compensating innocent victims for the ravages of war,” Montgomery says. VVAOT is now proceeding with a fourth cows project, with the aim of raising $AUD18,000.

For as long as the delivery of cows and calves is able to improve the quality of life, villagers will continue to feel over the moon about the prospect of more fulfilled livelihoods.

To find out more about the Vietnamese Victims of Agent Orange Trust, visit their homepage: www.agentorange.org.au.