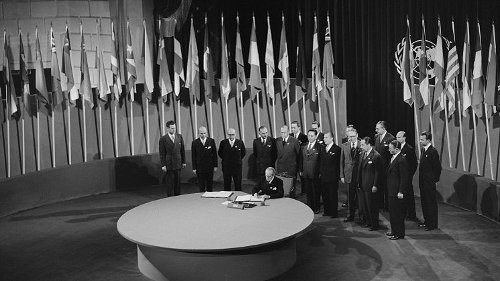 Russell proposed what was clearly the intention of the US Administration and other globalists, including the cynical purpose of the Baruch Plan, in assuring that atomic energy would be monopolized by an “international government” with power to act against any reticent state:

The international authority must have a monopoly of uranium, and of whatever other raw material may hereafter be found suitable for the manufacture of atomic bombs. It must have a large army of inspectors who must have the right to enter any factory without notice; any attempt to interfere with them or to obstruct their work must be treated as a casus belli. They must be provided with aeroplanes enabling them to discover whether secret plants are being established in empty regions near either Pole or in the middle of large deserts.[28]

Note that Russell is already by this time disparaging of the UNO, as having been rendered useless as an “international government” by the USSR. Russell made it clear where he stood in terms of American hegemony:

In the near future, a world war, however terrible, would probably end in American victory without the destruction of civilisation in the Western hemisphere, and American victory would no doubt lead to a world government under the hegemony of the United States —a result which, for my part, I should welcome with enthusiasm.[29]

Contingent upon the usefulness of the UNO as a global government, as intended, would be the elimination of the globalist bugbear, the Soviet imposed veto of the Great Powers:

If the United Nations Organisation is to serve any useful purpose, three successive reforms are necessary. First, the veto of the Great Powers must be abolished, and majorities must be declared competent to decide on all questions that come before the organisation; second, the contingents of the various Powers to the armed forces of the organisation must be increased until they become stronger than any national armed forces; third, the contingents, instead of remaining national blocks, must be distributed so that no considerable unit retains any national feeling or national cohesion. When all these things have been done, but not before, the United Nations Organisation may become a means of averting great wars.[30]

In 1961 Russell in considering the Soviet attitude to the Baruch Plan and the UNO was to say virtually in passing that “it was Stalin’s Russia, flushed with the pride in victory over the Germans, suspicious (not without reason) of the Western Powers, and aware that in the United Nations it could almost always be outvoted.”[31]

The repudiation, indeed the scuttling of the UNO foundations for a “new world order” required a re-evaluation of the USSR by the CFR as America’s self-described “foreign policy establishment”.[32]

Percy Bidwell, director of the Council’s new Studies Program, had courteously approached the Soviet Embassy as early as January 1944 to stimulate interest in the joint project. He was received by Ambassador Andrei Gromyko, whose response would become all too familiar in the years to come. Through Gromyko the Russian word “nyet” entered the English language. Without any pretense of diplomatic tact, the ambassador (soon to be foreign minister) told the men from the Council he would not permit any responsible Soviet spokesman to join in such a discussion.[33]

The policy formulated for the USA vis-à-vis the USSR was “containment”, a word coined by diplomat and CFR member George Kennan.[34] Grosse is candid in describing the clandestine – conspiratorial? – manner by which the CFR influenced Cold War  policy:

The Council on Foreign Relations functioned at the core of the public institution-building of the early Cold War, but only behind the scenes. As a forum providing intellectual stimulation and energy, it enabled well-placed members to convey cutting-edge thinking to the public—but without portraying the Council as the font from which the ideas rose.[35]

An initial report by George S Franklin in 1946 recommended attempting to work with the USSR as much as possible, “unless and until it becomes entirely evident that the U.S.S.R. is not interested in achieving cooperation…” However the USA should pursue co-operation from a position of military strength:

The United States must be powerful not only politically and economically, but also militarily. We cannot afford to dissipate our military strength unless Russia is willing concurrently to decrease hers. On this we lay great emphasis.

We must take every opportunity to work with the Soviets now, when their power is still far inferior to ours, and hope that we can establish our cooperation on a firmer basis for the not so distant future when they will have completed their reconstruction and greatly increased their strength…. The policy we advocate is one of firmness coupled with moderation and patience.[36]

However this mildly conciliatory policy was rejected in total. Grosse writes:

The Franklin report of May 1946, outlining cautious hopes for cooperative relations between the United States and the Soviet Union in the coming post-World War II years, was dead. The board’s committee on studies formally decided against publication in July; by November all sympathy for a conciliatory stance toward Moscow had disappeared from the corridors of the Harold Pratt House.[37]