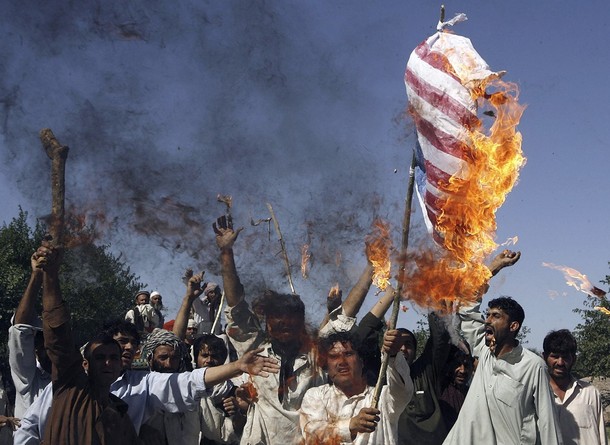 Who? Afghan civilians protesting against the killing of more than a dozen villagers in eastern Afghanistan.

What? Hundreds of angry Afghans torch U.S. flags and effigies of President Barack Obama to vent their rage against U.S. and NATO occupation forces.

Where? The protests swept eastern Afghan cities including Jalalabad, some 120 km east of Kabul.

When? The overnight NATO raids took place on Thursday 13 May. The enraged protesters took to the streets following morning on Friday, 14 May.

Why? Civilians took to the streets to condemn the NATO air raid that killed at least 12 farmers in a village outside Jalalabad. One protester was shot dead by the police when hundreds of protesters tried to block the highway. Dozens of civilians have lost their lives in similar raids during the last few weeks.

How? Eyewitness reports say at least 11 people, most of them farmers, died in an air raid conducted by NATO gunship helicopters when they were trying to target suspected Taliban fighters in the area. NATO officials denied any civilian killings and insisted that investigations are underway to ascertain any civilian loss.