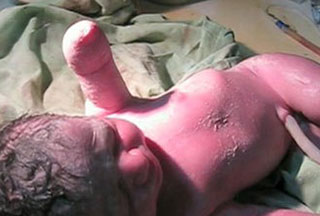 Rates of birth defects have reportedly increased in Fallujah since the major U.S. assaults against the city in 2004. The use of depleted uranium munitions is one suspected cause, but the Pentagon has long denied that DU poses a health risk.

When did it begin, all this “We take your [call/problem/question] very seriously”? With answering-machine hell? As you wait endlessly, the company or government agency assures you that they take seriously whatever reason you’re calling. What a kind and thoughtful world we live in.

The BBC reported last month that doctors in the Iraqi city of Fallujah are reporting a high level of birth defects, with some blaming weapons used by the United States during its fierce onslaughts of 2004 and subsequently, which left much of the city in ruins. “It was like an earthquake,” a local engineer who was running for a national assembly seat told the Washington Post in 2005. “After Hiroshima and Nagasaki, there was Fallujah.” Now, the level of heart defects among newborn babies is said to be 13 times higher than in Europe. 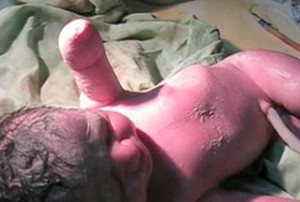 Rates of birth defects have reportedly increased in Fallujah since the major U.S. assaults against the city in 2004. The use of depleted uranium munitions is one suspected cause, but the Pentagon has long denied that DU poses a health risk.

The BBC correspondent also saw children in the city who were suffering from paralysis or brain damage, and a photograph of one baby who was born with three heads. He added that he heard many times that officials in Fallujah had warned women that they should not have children. One doctor in the city had compared data about birth defects from before 2003 — when she saw about one case every two months — with the situation now, when she saw cases every day. “I’ve seen footage of babies born with an eye in the middle of the forehead, the nose on the forehead,” she said.

A spokesman for the US military, Michael Kilpatrick, said it always took public health concerns “very seriously”, but that “No studies to date have indicated environmental issues resulting in specific health issues.”[1]

One could fill many large volumes with the details of the environmental and human horrors the United States has brought to Fallujah and other parts of Iraq during seven years of using white phosphorous shells, depleted uranium, napalm, cluster bombs, neutron bombs, laser weapons, weapons using directed energy, weapons using high-powered microwave technology, and other marvelous inventions in the Pentagon’s science-fiction arsenal … the list of abominations and grotesque ways of dying is long, the wanton cruelty of American policy shocking. In November 2004, the US military targeted a Fallujah hospital “because the American military believed that it was the source of rumors about heavy casualties.”[2] That’s on a par with the classic line from the equally glorious American war in Vietnam: “We had to destroy the city to save it.”

How can the world deal with such inhumane behavior? (And the above of course scarcely scratches the surface of the US international record.) For this the International Criminal Court (ICC) was founded in Rome in 1998 (entering into force July 1, 2002) under the aegis of the United Nations. The Court was established in The Hague, Netherlands to investigate and indict individuals, not states, for “The crime of genocide; Crimes against humanity; War crimes; or The crime of aggression.” (Article 5 of the Rome Statute) From the very beginning, the United States was opposed to joining the ICC, and has never ratified it, because of the alleged danger of the Court using its powers to “frivolously” indict Americans.

So concerned about indictments were the American powers-that-be that the US went around the world using threats and bribes against countries to induce them to sign agreements pledging not to transfer to the Court US nationals accused of committing war crimes abroad. Just over 100 governments so far have succumbed to the pressure and signed an agreement. In 2002, Congress, under the Bush administration, passed the “American Service Members Protection Act”, which called for “all means necessary and appropriate to bring about the release of any US or allied personnel being detained or imprisoned by … the International Criminal Court.” In the Netherlands it’s widely and derisively known as the “Invasion of The Hague Act”.[3] The law is still on the books.

Though American officials have often spoken of “frivolous” indictments — politically motivated prosecutions against US soldiers, civilian military contractors, and former officials — it’s safe to say that what really worries them are “serious” indictments based on actual events. But they needn’t worry. The mystique of “America the Virtuous” is apparently alive and well at the International Criminal Court, as it is, still, in most international organizations; indeed, amongst most people of the world. The ICC, in its first few years, under Chief Prosecutor Luis Moreno-Ocampo, an Argentine, dismissed many hundreds of petitions accusing the United States of war crimes, including 240 concerning the war in Iraq. The cases were turned down for lack of evidence, lack of jurisdiction, or because of the United States’ ability to conduct its own investigations and trials. The fact that the US never actually used this ability was apparently not particularly significant to the Court. “Lack of jurisdiction” refers to the fact that the United States has not ratified the accord. On the face of it, this does seem rather odd. Can nations commit war crimes with impunity as long as they don’t become part of a treaty banning war crimes? Hmmm. The possibilities are endless. A congressional study released in August, 2006 concluded that the ICC’s chief prosecutor demonstrated “a reluctance to launch an investigation against the United States” based on allegations regarding its conduct in Iraq.[4] Sic transit gloria International Criminal Court.

The UN resolution also stated that: “No consideration of whatever nature, whether political, economic, military or otherwise, may serve as a justification for aggression.”

The real reason that aggression remains outside the jurisdiction of the ICC is that the United States, which played a strong role in elaborating the Statute before refusing to ratify it, was adamantly opposed to its inclusion. It is not hard to see why. It may be noted that instances of “aggression”, which are clearly factual, are much easier to identify than instances of “genocide”, whose definition relies on assumptions of intention.[5]

There will be a conference of the ICC in May, in Kampala, Uganda, in which the question of specifically defining “aggression” will be discussed. The United States is concerned about this discussion. Here is Stephen J. Rapp, US Ambassador-at-Large for War Crimes Issues, speaking to the ICC member nations (111 have ratified thus far) in The Hague last November 19:

I would be remiss not to share with you my country’s concerns about an issue pending before this body to which we attach particular importance: the definition of the crime of aggression, which is to be addressed at the Review Conference in Kampala next year. The United States has well-known views on the crime of aggression, which reflect the specific role and responsibilities entrusted to the Security Council by the UN Charter in responding to aggression or its threat, as well as concerns about the way the draft definition itself has been framed. Our view has been and remains that, should the Rome Statute be amended to include a defined crime of aggression, jurisdiction should follow a Security Council determination that aggression has occurred.

Do you all understand what Mr. Rapp is saying? That the United Nations Security Council should be the body that determines whether aggression has occurred. The same body in which the United States has the power of veto. To prevent the adoption of a definition of aggression that might stigmatize American foreign policy is likely the key reason the US will be attending the upcoming conference.

Nonetheless, the fact that the United States will be attending the conference may well be pointed out by some as another example of how the Obama administration foreign policy is an improvement over that of the Bush administration. But as with almost all such examples, it’s a propaganda illusion. Like the cover of Newsweek magazine of March 8, written in very large type: “Victory at last: The emergence of a democratic Iraq”. Even before the current Iraqi electoral farce — with winning candidates arrested or fleeing [6]— this headline should have made one think of the interminable jokes Americans made during the Cold War about Pravda and Izvestia.