9/11 Hijackers Not on Flight Manifests? 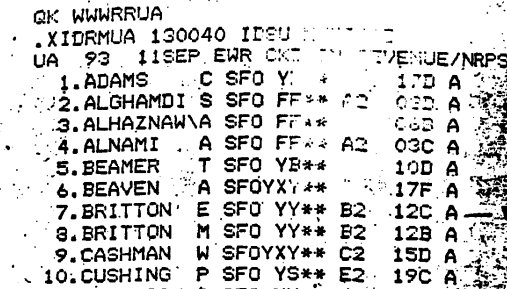 The manifest for United Airlines Flight 93

Many aspects of the official account of 9/11 are false, but so is the claim that no Arab names appeared on the flight manifests of the hijacked planes.

The claim that no Arab names appeared on the flight manifests for the planes hijacked on the morning of September 11, 2001 arose shortly after the terrorist attacks, and variations on the theme have persisted to this day. The claim initially arose when lists of passengers published by CNN, The Guardian, and the Associated Press contained no names of hijack suspects.

But to draw the conclusion from this that therefore no Arab names were on the manifest was a clear example of misinformation, as these lists were clearly reported as lists of victims, and partial lists at that. Furthermore, none of those lists were sourced to the manifests themselves. The Associated Press, for instance, noted that its lists were compiled not from any of the manifests, but from information obtained from “family members, friends, co-workers and law enforcement.”[1]

The only list sourced to an actual manifest was from a graphic created by the staff of the Boston Globe that showed a complete list of names and seating locations for passengers on American Airlines Flight 11. That list did indeed include the names of the suspected hijackers, although it is not clear whether the Globe obtained the information independently from the airline or from investigators. Although acknowledging receipt of an inquiry into this question and initially expressing a willingness to investigate, the Globe ultimately declined to comment for this report.[2]

According to testimony to the 9/11 Commission, the U.S. Customs Office of Intelligence was able to identify the hijackers within perhaps as little as 45 minutes of the attacks by obtaining the passenger manifest for each of the four hijacked flights from the airline companies. Two of the hijackers, Khalid al-Midhar and Nawaf al-Hazmi, were immediately identified when their names were run through the terrorist watchlist database.

Robert C. Bonner, former Commissioner of Customs and Border Protection for the Department of Homeland Security, told the commission that the identification of the others was accomplished by “using those two hits and taking a look at some other basic data about the flight manifest”, such as “where they were seated” and “where they purchased their tickets”, and doing “just a quick link analysis”. Bonner added that “certainly by 11:00 a.m., I’d seen a sheet that essentially identified the 19 probable hijackers. And in fact, they turned out to be, based upon further follow-up in detailed investigation, to be the 19.”[3]

According to an FBI document sent from the Chicago command post to FBI Director Robert Mueller on September 12, 2001, “United Airlines Flights #175 and #93 manifests [were] obtained by FBI Chicago CP [Command Post]” at 10:59 a.m. the previous day. The FBI noted that there were “5 Muslim names” on the Flight 93 manifest and “6 Muslim names” on the other. It named four of the six on Flight 175 as “Hamed Alghamdi, Hamza Alghamdi, Marwan Alshghhi and Mohald Alshehri” [sic]. These four were all checked onto the flight by the same airline employee, whom Chicago requested the FBI in Boston to interview. The document makes no similar mention of having obtained the manifests for Flights 11 and 77.[4]

So by the time the Chicago FBI obtained two of the manifests, Bonner, according to his testimony, had already seen a sheet identifying all 19 hijackers while at the Secret Service Headquarters after having been evacuated from his temporary office in the Treasury Department building. Thus, it is apparent that various government agencies had obtained the manifests from the airlines at different times and independently from one another.

When the 9/11 Commission requested that the FBI submit an explanation of how it identified the hijackers, the agencies response stated that it had “Identified names of all individuals onboard the four hijacked flights using flight manifests”. The FBI had also “Obtained identifying information from the airline passenger name records and flight booking information.”[5]

But if identifying the 19 hijack suspects was as simple as Bonner described, that fact was not well reflected in media reports on the investigation.

Conflicting accounts of the ongoing investigation

On September 13, CNN reported that “The FBI is working on the assumption that there were between 12 and 24 hijackers”.[6] At a press conference the same day, Attorney General John Ashcroft said that “the total number of hijackers, to our best estimate and our best knowledge given the information at this time, on the four planes that crashed was at least 18.” [7]

FBI Director Robert Mueller added that “they were ticketed passengers” and said the belief at that time was that there were five hijackers on Flights 11 and 175 and four on Flights 93 and 77.[8]

The following day, CNN reported that it had obtained “a list of the names of the 18 suspected hijackers that is supposed to be officially released by justice sometimes later today”. This was apparently an error, as the report then named not 18 but 19 suspects. Curiously, one suspect appearing later the same day in the FBI’s official press release did not appear on CNN’s list. Instead of the name “Hani Hanjour”, the CNN transcript of the report had the name of the fifth hijacker aboard Flight 77 as “Mosear Caned”. As this was a rush transcript of the program, the names listed were spelled phonetically. Yet each of the other names obviously correlated with the names released later that day by the FBI. “Setam Segani”, for instance, was “Satam Al Suqami”. “Marwanal Shehhi” was “Marwan Al-Shehhi”, and so forth. The sole exception was Hani Hanjour.[9] Given the complete lack of resemblance between the two names, this discrepancy is not as easily attributable to an error in pronunciation by the reporter or to a spelling mistake in transcription process, leaving open the possibility that the list CNN obtained did not in fact contain the name of Hani Hanjour. However, neither can journalistic error be ruled out.

As noted, when the FBI released its official list of the 19 hijack suspects later that day, it did include the name of Hani Hanjour. The day before, Mueller had said investigators believed there were four hijackers on Flight 77. Now that number had been revised upward to five, with Hani Hanjour possibly being the addition.

And while the FBI listed the name of “Abdulaziz Alomari” as a hijacker on Flight 11, with no mention of any aliases, the manifest, according to the Boston Globe, contained the name “Abdulrahman Alomari”.[10]

Further adding to the confusion, the Washington Post subsequently compiled known information about the hijackers and reported that Hani Hanjour “was not on the American Airlines manifest for the flight because he may not have had a ticket”.[11] As with the Boston Globe publication of the passenger information, it’s not clear whether the Post had actually obtained the manifest from the airline, or whether it obtained that information from investigators. The Post similarly declined to comment on this and other questions about its sourcing for this claim. If Hanjour was not on the manifest, it might explain why only Mueller originally offered the figure of 18, instead of 19 hijackers, and also why the number on Flight 77 was revised from four to five.

However, it’s also possible that the Post simply had their facts wrong, which may be the most plausible explanation. According to the government’s account, Hanjour was both on the manifest and had acquired a ticket. A trial exhibit from the prosecution that was admitted into evidence during the trial of Zacarias Moussaoui (the so-called “20th hijacker”) asserted that Hani Hanjour reserved a ticket for Flight 77 in New Jersey on August 31, 2001. The same slideshow at the Moussaoui trial showed a graphical representation of the seating arrangements for all four flights, including Hanjour in seat 1B on Flight 77.[12] While no actual evidence was provided to support those assertions, the standard of admissibility for evidence in a court of law would suggest that there was a documented chain of custody for the evidence supporting those assertions.

The courtroom presentation was apparently based upon a now declassified FBI chronology that was heavily cited by the 9/11 Commission, which offers more details on Hanjour’s ticket purchase. It states that he first attempted to use a debit card, but ended up paying cash because the cost exceeded card’s limit. Several sources are cited for this, but the references are coded, so it remains unclear what the actual evidence for this is.[13] Additionally, the timeline states that on the morning of September 11, Hanjour boarded Flight 77 at Dulles International Airport. Both the American Airlines manifest and Dulles security video tapes are cited as evidence for this.[14] The video showing Hanjour and other hijackers passing through the checkpoint at Dulles airport was also shown during the Moussaoui trial.[15]

When the 9/11 Commission closed on August 21, 2004, its records were transferred to the custody of the National Archives and Records Administration (NARA), and many of these records have since been publically released.[16] Among those records are airline manifests for Flights 93 and 175. While original manifests for Flights 11 and 77 have apparently not yet been released, passenger lists compiled from the manifests and other airline information for those flights for the 9/11 Commission are publicly available. 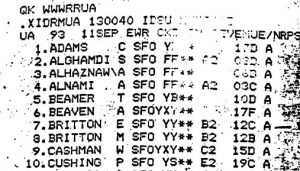 The manifest for United Airlines Flight 93

While information publically available about the manifests does indicate that the government’s account of what happened on 9/11 is correct on this count, a number of questions about conflicting media reports remain yet unanswered.