Gaza: An Odyssey for Justice 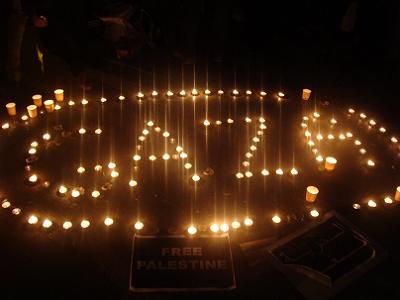 Activists hold a candlelight vigil in support the movement to free Gaza from a crippling Israeli siege that has kept the Palestinians in a perpetual state of humanitarian crisis. (Photo: Laura Durkay)

The recent actions of people from around the world in support of the Palestinian people in Gaza have arguably represented the closest manifestation of international solidarity since the International Brigades against fascism during the Spanish Civil War. A bold assertion?

Admittedly, I may not be as in tune with reality as I should be. Born and raised in a Gaza refugee camp where most refugees felt that no one cared about their plight, it was easy to believe that nothing could possibly break away from the ever tenuous and redundant stances by Arab and other countries — whose acts of solidarity went no further than hollow words of condemnation. The recent noble stances by activists from all over the world therefore seem like an unprecedented act of solidarity which, dare I believe, indicates the direct mass involvement of civil society as a real party in the ongoing Palestinian struggle for political and human rights. 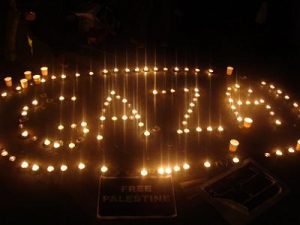 Activists hold a candlelight vigil in support the movement to free Gaza from a crippling Israeli siege that has kept the Palestinians in a perpetual state of humanitarian crisis. (Photo: Laura Durkay)

During the Spanish Civil War (1936-39), when various European powers were turning blind eye to the atrocities committed in Spain, almost 40,000 men and women, representing 52 countries, made the decision to fight fascism. The global consciousness culminating in such a direct, unprecedented action was absolutely baffling considering the lack of powerful communication technology available at the time.

The 2,800 American volunteers included a black man — Canute Frankson — who was a member of the Abraham Lincoln Brigade. He wrote to a friend from Madrid in 1937: “Why am I, a Negro who have fought through these years for the rights of my people, here in Spain today? Because we are no longer an isolated minority group fighting hopelessly against an immense giant. Because … we have joined with, and become an active part of, a great progressive force, on whose shoulders rest the responsibility of saving human civilization from the planned destruction of a small group of degenerates … Because if we crush fascism here we’ll save our people in America, and in other parts of the world from the vicious persecution, wholesale imprisonment, and slaughter which the Jewish people suffered and are suffering under Hitler’s fascist heels.”

How pertinent these words are, as one reads with anxiousness, pride and exhilaration the notes and messages that have come in from Cairo, El Arish and Gaza. They convey the support of countless people, who have demonstrated with blood and tears their commitment to humanity in Palestine, and indeed everywhere.

The Gaza Freedom March, a coalition of several groups, consisted of 1,362 activists from more than 40 countries who were on a mission to cross to Gaza and, along with Israeli, Palestinian and international peace activists, to march simultaneously to the Israeli Erez checkpoint. That border point, along with a few others, has completely cut off Palestinians in Gaza from the outside world, leaving 1.5 million people in a frightening state of siege. Gaza has been embroiled in the world’s worst humanitarian catastrophe for years due to the Palestinian people’s exercise of their democratic rights. The people of Gaza have endured one-sided wars, and have been left to exist in a state of near starvation.

The valiant peace warriors of Viva Palestina have truly set new standards for how far a peace and justice activist is willing to go to back up his/her words with actions. Many millions around the world watched — despite the mainstream media’s shameless disregard of the unfolding drama — as nearly 500 activists and their 200 vehicles, laden with badly needed medical supplies for besieged Gaza, took off on a historic odyssey to break the siege. Just as they neared Gaza, they were forced by the Egyptian government to backtrack due to a technicality, and then began an arduous journey across the desert and sea and several countries. And as they approached Gaza again, in the Egyptian port of El Arish, they were blocked and dozens were left injured.

The Gaza Freedom March was similarly met with intimidation, assaults and violence.

These are not Palestinians, but internationals. From Malaysia to South Africa, from the UK to the U.S., men, women, Christian, Jewish, Muslim, people of different cultural and political backgrounds showed themselves as unified in their belief in justice and human rights. While Palestine has always enjoyed universal solidarity, with many fearless activists — who can forget Rachel Corrie? — a collective action of this magnitude and of this level of commitment is a new addition to a conflict that has been reduced over time to that of beleaguered Palestinians and a militarily powerful Israel.

The Gaza Freedom March, Viva Palestina, the Free Gaza Movement, and others are redefining the conventional discourse pertaining to the Middle East’s most intricate and protracted conflict. Civil society is not a group of NGOs to be strategically funded and manipulated by Western governments, but encompasses powerful, self-assured and truly representative communities from all over the world; people can be united beyond religion and ideology, and collectively cross continents, seas and deserts to put their beliefs into action.

The activists’ ability to overcome the shameful silence of the mainstream media also highlights the importance of alternative media as the single most important tool in achieving camaraderie. “Throughout the Gaza Freedom March presence in Cairo, our brothers and sisters from the South African delegation dynamically articulated the connections between injuries that indigenous Africans suffered under the white supremacist regime in Pretoria and the inequalities that Palestinians now face at the hands of the Israeli government,” wrote Joshua Brollier, a co-coordinator for Voices For Creative Non-Violence, in the Palestine Chronicle.

Many heroes and heroines emerged from the activists’ action-packed journey to Gaza. Hedy Epstein, an 85-year-old Holocaust survivor whose parents both perished in Auschwitz, deserves a special mention. She went on a hunger strike when she, along with many others were blocked from entering Gaza. Epstein didn’t stand in solidarity with the Palestinians despite the Holocaust, but because of the Holocaust. Similarly many activists drew their solidarity from their specific experiences and have fought for democracy and justice back at home.

Maybe I am in tune with reality after all. Maybe the words and actions of our African America hero Canute Frankson weren’t in vain. Maybe the quest for justice can in fact cross all physical and psychological boundaries. One thing is for sure, though. Gaza is not alone; in fact, it never was.