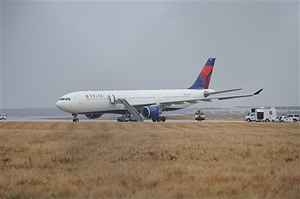 The Underwear Bomber case indicates that whoever is behind these bomb scares is laughing at our gullibility.

How realistic is it that al-Qaida, an organization that allegedly pulled off the most fantastic terror attack in world history, would in these days of heightened security choose for an attack on an airliner a person who is the most conspicuous of all?  Umar Farouk Mutallab had a one-way ticket, no luggage, no passport, and his father, reportedly a CIA and Mossad asset, had reported him to the CIA and Mossad.  Does anyone really believe that al-Qaida would choose as an airliner bomber a person waving every red flag imaginable?

This obvious question has escaped the US media, a collection of salespersons marketing full body scanning machines for airports.

Would al Qaida, with its extensive knowledge of explosives, have armed Umar with a “bomb” that experts say couldn’t have blown up his own seat?

It is difficult to imagine a more gullible population than America’s, but do even Americans believe this story?

Since 9/11 the F.B.I. has been busy enticing people, who lack organizational skills, into “terrorist plots” that consists of F.B.I. initiated hot air talk.  These ridiculous stings are then taken to trial, and the media fans the flames of fear of “home-grown terrorist plots against Americans.”

There is little doubt that those interested in leading the U.S. deeper into a police state and deeper into a “war on terror” are active in adding orchestrated events to whatever real ones real terrorists manage to accomplish.  The paucity of real terrorists has caused the U.S. government and its Ministry of Truth to promote the Taliban to terrorist rank.  The problem is that these “terrorist acts” are taking place thousands of miles away in lands that the average American cannot find on a map and, thus, lack scare value.  To keep the peril alive for Americans, we have the Underwear Bomb Plot.

What will be next?  An elaborate head of hair laced with nano-thermite?

The “war on terror” is a far greater threat to Americans than all the terrorists in the world combined.  This is so because the “war on terror” has destroyed the U.S. Constitution and the Bill of Rights.  American citizens are now helpless in the event someone in government decides that some constitutionally protected behavior, such as free speech, or a contribution to a children’s hospital in Gaza, where Hamas, a U.S.-declared “terrorist organization,” happens to be the elected government, constitutes aiding and abetting terrorism.

On January 5 a ruling by the Federal Appeals Court in the District of Columbia gave away the most essential protection of liberty by declaring that the U.S. government is not bound by law during war.  The ruling absolves Washington from complying with America’s own laws and from complying with international laws, such as the Geneva Conventions.  It makes a mockery of all war crime trials everywhere. By elevating the executive branch above the law, the court gave the government carte blanche.

The rationale offered by the court for refusing to uphold the law came from Judge Janice Rogers Brown, who said that America had been pushed by war past “the leading edge of a new and frightening paradigm, one that demands new rules be written. War is a challenge to law, and the law must adjust.”  By “adjust” she means “ be set aside” or “be thrown out.”

The U.S. Supreme Court has refused to defend both the Constitution and the principle that government is not above the law.  Last December 14 the Supreme Court refused to review a ruling by the Federal Appeals Court in the District of Columbia, which dismissed a torture case with the argument that “torture is a foreseeable consequence of the military’s detention of suspected enemy combatants.”  In other words, neither U.S. nor international laws against torture can be enforced in U.S. courts. The opinion was written by Judge Karen Lecraft Henderson.

The “war on terror,” which is enriching Halliburton, Blackwater (now operating under an alias), and the military/security complex, while denying Americans health care, is running up debt that is a threat to Americans’ purchasing power and living standards.  The contrast between America’s sanctimonious rhetoric and the murder of civilians and torture of prisoners has destroyed America’s reputation and caused Europeans as well as Muslims to despise the United States.

The sacrifice of the Constitution and rule of law to a hyped “theorist threat” has destroyed the heart and soul of America herself.

As a poet wrote, “our world in stupor lies.”