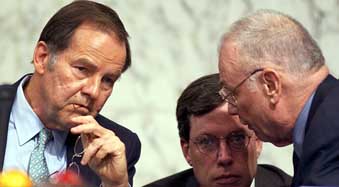 All too often, official inquiries are conducted by the very people who should themselves be under investigation.

In this respect, Britain’s Chilcot Inquiry on the Iraq war bears a distressing similarity to the 9/11 Commission.

In a remarkable symmetry, both inquiries involve a Jewish Zionist historian, who not only advised his country’s leader to go to war against Iraq, but actually provided the ideological justification for that unnecessary war.

Perhaps Philip Zelikow was one of the few people who was not surprised by his appointment as executive director of the National Commission on Terrorist Attacks upon the United States, better known as the 9/11 Commission. After all, the Professor of History at the University of Virginia had shown uncanny prescience in foreseeing an event such as 9/11 itself. In 1998, as project director of the Catastrophic Terrorism Group, Zelikow had written:

“An act of catastrophic terrorism that killed thousands or tens of thousands of people … would be a watershed event in America’s history.… Like Pearl Harbor, such an event would divide our past and future into a ‘before’ and ‘after.’”

Yet despite his awareness of an imminent threat of “catastrophic terrorism” against the United States, in the Bush administration Zelikow was instrumental in downgrading the status of the National Coordinator for Counterterrorism, Richard Clarke.[1] Effectively cutting off his direct access to the President, this prevented Clarke from discussing al-Qaeda with George W. Bush before September 11.

In an even clearer conflict of interest, as a member of Bush’s Foreign Intelligence Advisory Board, Zelikow had authored the 2002 National Security Strategy of the United States. Dubbed the “Bush Doctrine” by the Washington Post’s hawkishly pro-Israeli columnist Charles Krauthammer,[2] it advocated the necessity of “preemptive war.” Based on a policy first mooted in 1992 by two other Jewish neoconservatives, Paul Wolfowitz and Lewis Libby,[3] the Zelikow Doctrine provided the justification for the 2003 invasion of Iraq.

While Bush probably believed he was “ridding the world of evil,” Zelikow knew exactly why Iraq was being targeted. In a rare moment of candour, he told an audience at the University of Virginia on September 10, 2002:

“Why would Iraq attack America or use nuclear weapons against us? I’ll tell you what I think the real threat (is) and actually has been since 1990—it’s the threat against Israel. And this is the threat that dare not speak its name, because the Europeans don’t care deeply about that threat, I will tell you frankly. And the American government doesn’t want to lean too hard on it rhetorically, because it is not a popular sell.”

Nevertheless, as executive director of the 9/11 Commission Zelikow did his very best to “sell” the Iraq war to the American people. The first expert witness he called had “no special expertise on the events of September 11,” but that didn’t seem to matter too much. Instead of discussing 9/11, Abraham Sofaer, a board member of the pro-Israeli Koret Foundation, made an impassioned speech in support of the “preemptive war” against Iraq.[4]

An even more controversial “expert” witness called was Laurie Mylroie. Known as the “neocons’ favourite conspiracy theorist,” the American Enterprise Institute scholar had made a career out of seeing the hand of Saddam Hussein behind every anti-American terrorist attack during the previous decade. Her 2000 book, Study of Revenge, in which she laid out her flimsy case against Saddam, acknowledged the assistance of Wolfowitz and Libby, and was blurbed by Richard Perle as “splendid and wholly convincing.”

Exercising a skepticism toward Mylroie’s “batty” theories lacking in much of the media coverage, one of the 9/11 widows lambasted Zelikow for this transparent “sales pitch for the Iraq war.”

Zelikow’s persistent efforts to rewrite the Commission staff’s reports to give the impression of a link between al-Qaeda and Iraq “horrified” some of his staff, many of whom considered him a “White House mole.”[5] Little did they suspect, however, that Zelikow’s loyalties might lie much further afield.

If British Prime Minister Gordon Brown were genuinely interested in finding out why his predecessor followed George Bush into the Iraq quagmire, his appointment of Sir Lawrence Freedman to the five-member Chilcot Inquiry was an odd choice. As the political editor of the BBC’s Newsnight programme, Michael Crick, pointed out, “Critics of the war might argue Sir Lawrence was himself one of the causes of the war!”

Crick was referring to a Freedman memo which formed the basis of Tony Blair’s 1999 Chicago speech, “The Doctrine of the International Community.” In what became known as the “Blair Doctrine,” Freedman had offered an answer to the specious question: “When was military action justified for liberal, humanitarian reasons?”

In addition to the Freedman Doctrine’s justification of military intervention in “rogue states” such as Iraq, Freedman has admitted that he “instigated” a pre-war seminar for the British Prime Minister, because he was “aware of misgivings among some specialists in Iraq about the direction of policy.” Clearly, Freedman has no such “misgivings” himself about the illegal invasion of Iraq. It was, he claims, motivated by “rather noble criteria.”[6]

In his recent book, A Choice of Enemies: America Confronts the Middle East, Freedman is dismissive of those who suspect less “noble” motives for the war.

“Another popular theory,” he writes, “is that U.S. foreign policy was effectively hijacked by a group of neoconservatives with a grand design to reshape the Middle East. A conspiratorial version of this theory argues that the aim was to help Israel, by removing a leading rejectionist state from the scene.”

Presumably, the consistency of the prescriptions that runs from Oded Yinon’s “A Strategy for Israel in the 1980s,” through Perle, Feith and Wurmser’s “A Clean Break,” to the so-called “Bush Doctrine” is merely coincidental. Evidently, the learned Professor of War Studies needs to read “The Israeli Origins of the Middle East War Agenda” in Stephen Sniegoski’s The Transparent Cabal.

Perhaps it is also “conspiratorial,” or worse, to wonder about the media’s hyping a book which obscures why America “confronts” Israel’s enemies in the Middle East, while one which exposes the Zionist agenda gets the silent treatment.[7] But it certainly is cause for concern when Freedman’s book, which also opts for the euphemism of a “security fence” to describe Israel’s Apartheid Wall, and repeatedly refers to the illegally occupied West Bank as Judea and Samaria,[8] is given such credence.

Just as the Zelikow-directed 9/11 Commission suppressed evidence that the main motive for the September 11 attacks was American support for Israel,[9] Freedman’s presence on the Chilcot Inquiry is a clear indication that there will be no inquiry into the role of Zionist insiders in taking Britain to war against Iraq—a country that posed a threat not to British interests but to Israel’s regional hegemony.