Turkey, Armenia, and the Terrible Truth 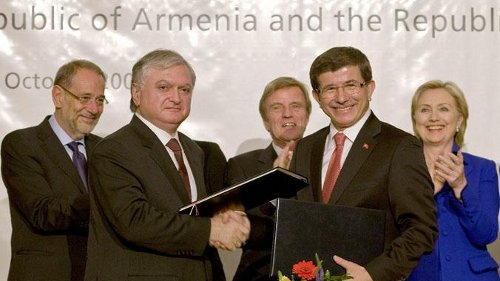 Or: Erdogan, Obama, and December 7

Turkey has always had its share of decent folks.

One close example is the righteous family who, during the great genocide and national dispossession of 1915, risked its own to save my grandmother Khengeni from certain death in the coastal town of Ordu.  The stories of thousands like them have not been told because of the Turkish state’s official dialectic of denial.

Apart from the remnant 50,000 of the established Armenian community, at least two million people in today’s Turkey draw lineage from an Armenian grandparent who was orphaned, stolen or saved—but in all cases Turkified—in the killing fields of Ottoman-occupied historic Armenia.  Voiceless and in another kind of denial, these progeny of mixed marriages are only now taking their first tentative steps in search of their real identity.

In the wake of Hrant Dink’s still unsolved assassination by Turkey’s deep state and its racist speech laws, a new class of conscientious and independent-thinking Turks has begun to form amid a belated realization that Turkey can never graduate to the free world unless it faces the unprecedented evil in its historical closet.  Still far from the mainstream, these brave new Turks know that their republic was founded not only on the deaths of millions of Armenians, Assyrians, Greeks and Kurds, but more viscerally on the systematic and complete erasure of the Armenian nation and its civilization from their ancestral heartland.  They deserve full faith and credit in their quest to liberate their country from nearly 90 years of false pretense, fraudulent education, and exclusivist nation-building. 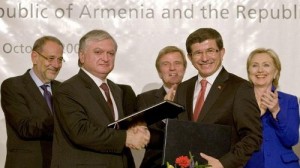 That is why the world’s movers and shakers have little ground for the kind of euphoria that they have widely been deploying to applaud the recent signature by the Turkish and Armenian governments of two protocols that promise, upon parliamentary ratification, to lead to Ankara’s ultimate agreement to open diplomatic relations with Yerevan and then to lift its long-standing blockade against it.

Superficial and feel-good formulations about the historic import of this development, whether they issue from Washington, Brussels or Moscow, seem purposefully to hide a few fundamental truths.

The current Armenian administration has no legitimate public standing to speak in this seminal matter on behalf of the Armenian people.  Having come to power in 2007-08 through fraud, forgery, and the blood of scores of citizens, it now seeks to shore up its legitimacy deficit by reference to foreign-policy offerings which sound good to Western ears but which in fact seek surrogate rewards for authoritarian demeanor.  Once again, the “international community” has moved dangerously to trump democratic principles and due process by its strong-armed resort to problem-solving geo-pragmatism.

The current Turkish administration is the successor to the Young Turk government that premeditated and executed the Armenian genocide and the corollary killing of homeland under the cover of World War I.  It is the successor to the Kemalist movement which in 1920-21 entered into a creative complicity with Russia’s Bolsheviks to overturn US President Woodrow Wilson’s arbitral award respecting Armenia’s de jure frontiers through their occupation and partition of the newly-independent Republic of Armenia; to delimit a de facto boundary between Soviet Armenia and Turkey which amounted to a surgical usurpation of most of the Armenian patrimony; and to alienate the Armenian territories of Karabagh and Nakhichevan to Soviet Azerbaijan. This was the precursor to Molotov-Ribbentrop a generation later.

The Turkish-Armenian draft protocols presently being considered and congratulated include references to asserting the illegal de facto border without simultaneously resolving issues of redemption, restoration, and return which arise from the underlying crimes against humanity:  both the Genocide and the ensuing Turkish-Russian conspiracy.   Hence, they are ab initio invalid, immoral, and impolitic.

Most unfortunately, the papers on the table, as well-intentioned as they might be, and the PR posturing and point-scoring associated with them do not constitute the basis for a full and enduring regulation of the Turkey-Armenia relationship and a truly historic reconciliation between their peoples.  They are pleasant—and deceptive—window dressing and nothing more.

When Turkey, Armenia, and the community of nations grow up to the gravity of the watershed challenge at hand, they will shift their gears, deliver on democracy and the rule of rights, and confront and correct history and its legacies of injustice.  In this spirit, and far from positing resolution on Mountainous Karabagh as a precondition to Turkish-Armenian normalization, they will ultimately recognize its God-given, legitimate right to post-Stalinist decolonization, liberty, and sovereign statehood.

And only in this way will we forge and then witness the region’s first post-genocide partnership.

Now is the time for the distinguished Turkish prime minister—and the American president whom he is set to visit shortly in Washington—to grasp that this is the final solution.  Not the other one.