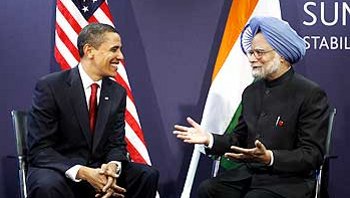 When the Indian Prime Minister Manmohan Singh meets President Obama during his visit to the US this week, the two leaders will discuss the strategic dialogue framework between the two countries.

Singh seeks to solidify a relationship transformed under the Bush administration from distant friendship to that of a ‘key ally’ that led to nuclear cooperation deal, increasing trade and investment, educational exchanges and unprecedented security collaboration. He is keen to finalize the civilian nuclear deal and seek Obama’s support for his bid for a permanent seat on the UN Security Council. 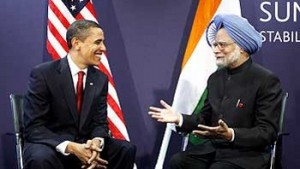 Singh may also seek reassurance that Indo-US relationship will not be over shadowed by the increasing Sino-US collaboration.

After the collapse of Soviet Union, India’s former mentor and ally, India sought an alliance with the United States who also had interest in wooing it. In the US containment of China policy under Bush, India could prove extremely useful to advance American interests, particularly because of strained Sino-Indian relations over regional ambitions and border dispute which led it into war with China in 1962, though with a humiliating outcome.

But this created a paradox for the US. Its old ally Pakistan, at one time an important link in containment of communism strategy during the cold war era and member of American sponsored now defunct military pacts – SEATO & CENTO, was highly suspicious of American ‘tilt’ towards India. Pakistan had an acrimonious relationship with India mainly over the Kashmir and water and India’s blatant role in the dismemberment of Pakistan in 1971.

Consistent Indian threat to Pakistan’s security led Pakistan to develop a nuclear response to Indian acquisition of nuclear weapons in 1974 to maintain the balance of power and ward off Indian hegemonic designs. Despite Pakistan’s efforts and calls by the international community, India refused negotiated settlement of disputes. This has kept the pot simmering, keeping an uneasy peace in the region. In the absence of progress in resolving the root causes of tensions, recent assurances by Obama and Singh that India poses no threat to Pakistan were outright rejected in Pakistan.

The US has used Pakistan for its own geopolitical objectives in the past during the cold war, to drive the Soviets out of Afghanistan in the 1980s and then for its war on terror in Afghanistan after 9/11. While it aided and equipped Pakistan for the role it wanted Pakistan to play, Pakistan’s relationship with the US has swung from being the ‘most allied ally’ to being the “most neglected ally” and then to being the ‘most sanctioned ally’, depending upon how much the US needed Pakistan’s services at a given time. In Pakistan, the US has come to be perceived as most unreliable and is viewed with deep suspicion.

Presently, deepening US relations with India result from a changing American perspective of the region. India could not only prove to be a huge market for American high tech goods, maybe weapon systems in the future, but its growing nuclear and military strength coupled with regional ambitions could be usefully utilized by the US as its proxy for policing the region.

Realizing that he cannot maintain military presence in Afghanistan for long, Obama needs to install a proxy power there too when he decides to pull out, most likely by 2011. India fits the bill. The US expects India to keep the government in Kabul under check, keep peace among warring factions and protect American interests.

India has its own interests too. The nuclear deterrence will not allow India to launch military aggression against Pakistan, but it can work for Pakistan’s dismemberment by promoting an East-Pakistan- style insurgency in Balochistan and continue squeezing Pakistan on the western border using rogue elements from the tribal belt. It has already begun to position its troops there under cover of development work.

The belief that India can hold the fort for the US is a fallacy. If the Afghans fiercely oppose foreign occupiers whom they have thrown out unceremoniously in the past, and if the Americans are also on the verge of withdrawal, what makes anyone think that Indian forces would be welcome to stay? Besides, the Taliban, who are bound to gain political influence in Kabul sooner or later, will reject Indian military presence on their soil, as it will represent American interests.

This Indo-US partnership, which seeks to serve divergent geopolitical objectives and is based on taking advantage of one and other, will neither be smooth nor lasting. Above all, it will seriously jeopardize peace in South Asia by alienating Pakistan and adding to its existing tensions with India. This will also ring alarm bells in Tehran and Beijing.

As of now in the current US matrix, cordial Sino-US relations are very important for a variety of reasons, mainly owing to American reliance on Chinese economic support that is not going to end any time soon. It is clearly not feasible for Obama to promote relations with India at the cost of its relations with China.

But this will not sit well with a sensitive India, given the history of Sino-Indian rivalry. Only recently the Indian officials, says a Washington Post report, in an outburst of Brahmanic self importance expressed concern that New Delhi has suddenly been relegated to the second tier of U.S.-Asian relations because Obama did not mention India in his speech on US relations in Asia recently. The speech was delivered in Tokyo and focused on the Asia-Pacific region and not South Asia. This, the Indians believe, is Obama’s failure to recognize India’s broader regional aspirations, something that the Bush administration had encouraged. The Indians were upset that “Washington was leaning too closely to China”.

Then to India’s chagrin came a call made through the joint statement on conclusion of Obama’s visit to China, in which Obama suggested that Beijing mediate between India and Pakistan. “China and the United States”, the statement said, “are ready to strengthen communication, dialogue and cooperation on issues related to South Asia and work together to promote peace, stability and development in that region.”

“A third-country role cannot be envisaged nor is it necessary” to solve disputes between India and Pakistan, was the retort by Indian Foreign Ministry. The influential Times of India headline read “Obama’s China (credit) card casts shadow on PM’s US visit,” referring to the $800 billion in U.S. Treasury securities held by China.

Ashley Tellis of the Carnegie Endowment said he detected in India “a sense of exclusion that’s been gnawing at them since the Tokyo speech.” He added: “The joint statement prompted new fears that somehow the United States and China would collude to manage events in South Asia.”

Tellis said this has caused particular neuralgia in India because tensions between Beijing and New Delhi have risen recently over competing border claims. India is also upset over Chinese plans to divert waters of Brahmaputra River that originates in Tibet and flows into Northeastern India, without whose water its plains would lay waste. In addition, Indians are concerned that the Obama administration, unlike the Bush administration, views India as part of the South Asian problem, which includes the instability in Pakistan.