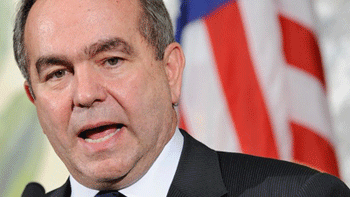 U.S. Assistant Secretary of State Kurt Campbell speaks to reporters in Tokyo about his visit to Burma (Getty Images)

An American delegation visiting Rangoon as part of a fact finding mission has been told by one of Burma’s main opposition parties that they refuse to endorse the country’s elections planned for 2010 under the current constitution which is accused of not guaranteeing any rights for Burma’s ethnic minorities. 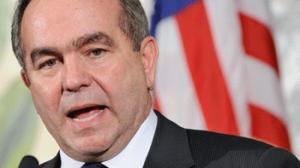 U.S. Assistant Secretary of State Kurt Campbell speaks to reporters in Tokyo about his visit to Burma (Getty Images)

In a statement delivered to a team led by Assistant Secretary Mr. Kurt Campbell, the United Nationalities’ Alliance (UNA) has asked the American delegation to increase the pressure on Burma’s military regime to adopt a more democratic constitution.

Mr. Campbell, along with three other members and two representatives from the US Embassy met with detained democracy leader Aung San Suu Kyi, as well as Burma’s Prime Minister Thein Sin and General U Saung. The delegation also met with eight members of the nation’s ethnic minority political parties.

The delegation is the highest level visit to Burma since 1995.

The Mizzima reports that some Burmese publications were given permission to photograph and report on the meeting between Aung San Suu Kyi with Campbell and Deputy Assistant Secretary Scot Marciel on November 4, but opinion remained divided as to whether the move depicted a change in attitude by the junta or the move was a ploy devised to work to the military’s advantage[1].

A Rangoon-based journal editor speaking on the agreement of anonymity said that state-run media chose not to cover the meeting because, “they want to show that they (the junta) have a positive attitude to the U.S. by leaving it (the coverage) to the private media”, the editor told the Mizzima[2].

In an interview with mizzima.com, Pu Cin Sian Thang of the Zomi National Congress reportedly informed the delegates, “We dislike the constitution because it does not guarantee any ethnic rights[3].” U Aye Thar Aung, spokesperson for the Arakan League for Democracy (ALD) expressed scepticism over the meeting’s purpose, saying that to the junta cared only about with normalizing ties with the U.S. and having sanctions removed, while refusing to offer concessions to oversee a genuine political democracy take shape in Burma[4].

Both the Zomi National Congress and the ALD are signatories to the UNA.

A coalition of 12 election parties representing various ethnic nationalities across Burma, the UNA won 67 seats in the 1990 elections which were won by the National League for Democracy (NLD) led by Aung San Suu Kyi, results the military refused to honor.

The UNA has repeatedly called for a review of the Burmese constitution, one involving a dialogue with the country’s military leaders and representatives of all ethnic groups before the military’s planned elections are held next year.

A spokesman for the UNA said without open consultation, Burma’s election will not be able to determine the best party and leader of the country. The spokesman also said that Article 413(b) “gives the president’s right to (conduct) a coup”, something the constitution contends “does not lead to a genuine democracy.”

In a press release dated November 4, the U.S. Embassy in Rangoon said that, “(their) exploratory mission (was) designed to explain to key stakeholders inside the country the results of the U.S. policy review towards Burma.

The Embassy said that the U.S. administration “is prepared to take steps to improve the relationship” as part of its direct engagement approach with the regime and leaders of ethnic minority groups, but added that the military must deliver “concrete results” in bringing a genuine democracy to Burma. Washington’s approach is supported by Japanese Prime Minister Yukio Hatoyama[5].

Figures obtained from lobby group the Assistance Association for Political Prisoners Burma (AAPP) show that 41 political prisoners were arrested in October 2009. More than 2,100 political prisoners are known to exist in Burma, with NLD members comprising 20 per cent of the country’s prison population[6].

In May 2008, Congress overwhelmingly supported a bill condemning the Burmese regime’s 2008 constitution by a margin of 413-1[7]. The military’s constitution was conducted in the aftermath of Cyclone Nargis which struck the Irrawaddy Region, killing hundreds of thousands and leaving millions homeless.

David Calleja is an independent writer based in Melbourne, Australia. You can email him at davidjcalle[email protected]