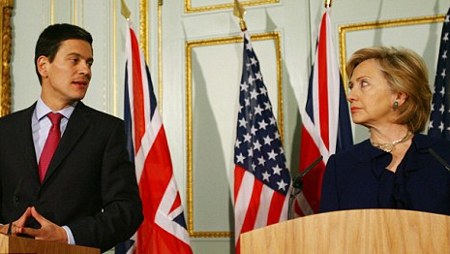 When British Foreign Secretary David Miliband uttered a few words regarding the illegality of the Israeli settlements in the occupied West Bank, many wanted to believe that London was taking a sharp stance against Israel’s continued violations of international law. Alas, they were wrong.

The fact is Miliband’s statement, made during a press conference that followed talks with Jordan’s King Abdullah II, in Amman, was merely tactical, aimed at lessening the negative impact of the feeble position adopted by Washington regarding the same issue. 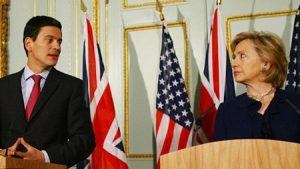 This is what Miliband had to say: “Settlements are illegal in our view and an obstacle to peace settlement in the West Bank and East Jerusalem. The settlements challenge the heart of… a Palestinian state.”

But then, he added: “It’s so important for all those who care about security and social justice in this region that discussions about borders and territory are restarted in a serious way, because if you can progress on border and territory, you can resolve the settlements issue.”

This is classic Miliband. While his clear and decisive statement regarding the illegality of the settlements and the fact that their construction is an obstacle is to be welcomed, one cannot decipher a politician’s statement in increments; to be truly appreciated, they must be understood as a whole.

The danger lies in Miliband’s follow up statement, where he purposely changed the order of the proposed solution to the Middle East crisis to be “discussions about borders and territory are restarted in a serious way”, which means unconditional negotiations, because “progress” at that front would “resolve the settlements issue.”

But isn’t this the exact type of dialogue that Israel wishes to take part in: peace talks with no conditions, no deadline and no specific end, while it persists in building its illegal settlements in flagrant violation of international law, unabated? More, isn’t this what Palestinians, all Palestinians, have vehemently rejected?

The Palestinian leadership understands that unconditional negotiations will yield Palestinians, the weak party in any negotiations, nothing but further humiliation, while the strong party will determine a solution, any solution, it finds suitable to its interests.

Considering that Israel is under no serious pressure, but occasional lip service to the peace process, from Washington, and London, the rightwing government of Benjamin Netanyahu has no reason to stop, or even slow down its illegal settlements project and the subsequent ethnic cleansing of Palestinians.

Miliband is a clever politician. Although his words reek with contradictions, they are stacked in such away to give the impression that a substantive policy change is in fact in the making.

Miliband’s supposedly strong statement on the settlements came at a time that the Obama Administration’s policy, a meager attempt at presenting itself as the antithesis to the hated George Bush legacy, is falling apart.

In May, following President Obama’s first meeting with Netanyahu, US Secretary of State Hilary Clinton wanted to leave no doubt regarding the US new policy on settlements. The US “wants to see a stop to settlements – not some settlements, not outposts, not natural growth exceptions.”

This sounds great, even better than Miliband’s recent statement. But since then, the Obama Administration has obviously discovered the limits of the “audacity of hope”: a strong, unified pro-Israel lobby, decisively rightwing Israeli government, a unified US Congress backing Israel’s every move, a wishy-washy international community, fragmented Muslim and Arab countries, and all the rest.

Therefore, it was no surprise to see Mrs. Clinton, during her recent Middle East trip backtracking on every promise that her government had made. She “claimed [on November 1] that halting settlement building had never been a pre-condition to resuming talks,” reported The Times.

Worse, not only did she fail to convince Netanyahu of the US position, which was more or less consistent with international law, she commended him for failing to meet what was once considered a strong US demand.

The switch happened during her recent tour’s one-day visit to Jerusalem. “What the Prime Minister (of Israel) has offered in specifics of restraint on the policy of settlements  … is unprecedented,” she said of Netanyahu’s dismal promise to slow down settlement activities in the West Bank.

There are over 500,000 Jewish settlers in occupied East Jerusalem and the West Bank, living in many settlements that are all considered illegal under the Fourth Geneva Convention and numerous UN resolutions.

To add insult to injury, Mrs. Clinton continued, at every stop, to demand that Arabs and Muslims reach out to Israel. What has the latter done to deserve any Arab or Muslim normalization, open markets and establishment of diplomatic ties? Why should Israel be rewarded for its massacres in Gaza, entrenching of its military occupation of the West Bank and East Jerusalem, the consistent attacks on al-Aqsa Mosque and more?

Concurrently, the Palestinian Authority is, perhaps, realizing its error of trusting that the Obama Administration’s resolve would prevail over Israel’s obstinacy.

Top PA official Nablil Abu Rudeinah said that the “negotiations are in a state of paralysis,” blaming both “Israeli intransigence and America’s back-pedaling.”

“There is no hope of negotiations on the horizon,” Abu Rudienah added.

Chief Palestinian negotiator Saeb Erekat’s words, during a press conference in Ramallah, in the West Bank, on November 4, were gloomier, however. It may be time for Palestinian President Mahmoud Abbas to “tell his people the truth that with the continuation of settlement activities, the two-state solution is no longer an option,” he said.

He said what many don’t want to hear, including Miliband himself, who insists on breathing life into an outdated ‘solution’, while doing nothing to turn it into reality.

“It’s important we don’t lose sight of the importance of a two-state solution for all peoples of the region. I think the alternatives are dark and unwelcome for all sides,” Miliband said.

He failed, however, to enlighten us on how his ‘bright and welcomed’ solution is to be realized, as Israel continues to seize Jerusalem and the West Bank, inch by inch and house by house, in front of international media and with the knowledge and subtle agreement of ‘back-pedaling’ politicians, Mrs. Clinton and himself included.