To Send or Not to Send: Will Obama commit additional troops to Afghanistan? 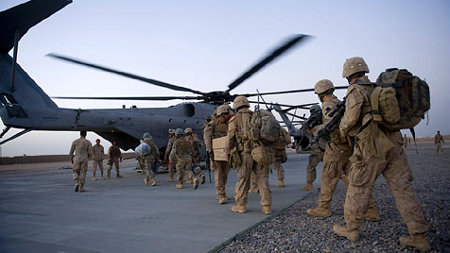 Vietnam would be difficult to erase from the memory of the Americans for at least several generations to come and wars in Afghanistan and Iraq will keep reviving those memories. Perhaps this led former Republican senator Chuck Hagel, who accompanied Obama to Iraq during latter’s political campaign, to advise him to listen to the recording of that conversation between President Lyndon B. Johnson and former Senator Richard Russell (D-Ga.) about Vietnam wherein “LBJ told Russell that we would not win in Vietnam but that he did not want to pull out and be the first American president to lose a war.”

This appears to be the mindset that drives the American presidency in persisting to continue Afghanistan and Iraq wars that have long been lost. First Bush, and now President Obama is unwilling to concede defeat despite the colossal losses and agony these wars have inflicted upon the American, Afghan, Iraqi and Pakistani people, besides destabilizing the region and feeding the monster of terrorism.

In his recent speech to the Veterans of Foreign Wars, Obama warned: “There will be more difficult days ahead. The insurgency in Afghanistan didn’t just happen overnight, and we won’t defeat it overnight. This will not be quick nor easy. But we must never forget: This is not a war of choice. This is a war of necessity”.

“Those who attacked America on 9/11 are plotting to do so again,” he went on to say. “If left unchecked, the Taliban insurgency will mean an even larger safe haven from which al-Qaeda would plot to kill more Americans. So this is not only a war worth fighting. This is fundamental to the defense of our people.”

This then is the strategy that Obama is laying out for Afghanistan. And this perhaps is the prelude to the public case he is going to make after he has reviewed the assessment of Afghanistan situation he received from General McChrystal, top US and NATO commander in Afghanistan.

But Obama has a difficult task ahead of him. By raising the ante in Afghanistan he is caught between devil and the deep sea. He loses his own popularity and support at home for pushing the war, while his troops continue losing ground to the Taliban.

His domestic audience will not concede to his rhetoric. Firstly, he like Bush has never been able to establish why is America engaged in these wars. 9/11 is no more a valid reason for most people. Then economic collapse and rising death toll of American troops are major factors that have turned Americans against the war. They are broadly skeptical of his contention that winning the war in Afghanistan is necessary for war against terrorism to succeed and few see an increase in troops as the right thing to do. According to recent Washington Post-ABC News poll President Obama’s approval rating on handling of Afghanistan has slipped for the fist time below 60%, from 63% in April to 55% in September, a sizable drop of 8 percentage points.

The argument that America has been made safer as a result of these wars does not cut much ice now. Most people believe that absence of any attack after 9/11 on American interests either on its soil or elsewhere is attributable not to Bush administration’s ability to weave a safety cocoon around America, but because there existed no real threat to begin with. Attacks in London and Madrid are alleged to have been orchestrated. As more and more evidence emerges about 9/11 being an inside job, an ever increasing number of Americans now question the motive behind it and suspect the real identity of the perpetrators.

Sensing the mood of the electorate, the Congress is getting edgy too. Members of the Senate Armed Services Committee, except for hawks like John McCain, were shaking their heads in disbelief on September 15 when they heard from Admiral Mike Mullen, chairman of Joint Chiefs of Staff, a bleak assessment of the war and that “A properly resourced counterinsurgency probably needs more forces”.

Admiral Mullen told senators that 2,000 to 4,000 additional military trainers from the United States and NATO partners will be needed to “jump-start” the expansion of Afghan security forces and strongly suggested that more U.S. combat troops will be required for short term security.

His efforts at reassuring the senators did not go much far. Despite being told that commanders were devising new tactics that would lead to victory over a resurgent Taliban, many remained unconvinced.

Obama has ordered 17,000 U.S. combat troops and 4,000 trainers to Afghanistan this year, which will raise the total number of American service personnel to 68,000 by the year’s end. It is speculated that General McChrystal will request for 30,000 to 40,000 more combat troops.

An increasing number of Congressmen is skeptical about the direction and the outcome of the war and would oppose an escalation. They would be reluctant to blindly approve troops and resources for fear of a backlash at the midterm elections next year when 51% people believe the war is not worth fighting for. Obama does not have the same advantage as Bush when war hysteria created by Bush and his cronies made every one opposed to ‘war against terrorism’ look stupid and unpatriotic.

The Democrats then chose to swim with the tide. But after that Neocon hysteria died down and sanity returned to American thinking that began ripping apart Bush’s motives for going to war in Iraq, many Democrats were found scrambling to distance themselves from Bush’s war. Except the then Senator Obama, who was among the few that opposed the war and later claimed a moral high ground for having been proven right, others sheepishly took shelter under the flimsy argument that they were led into voting for the war due to faulty intelligence presented to them – hardly an excuse for not using their own better judgment. These included the presidential hopeful Senator Kerry and the secretary of state Hillary Clinton, when their ‘vote in support of the war’ came to haunt them during their presidential campaigns. Both lost their bids for the White House.

The Democratic Party is not as solidly behind Obama on every issue as the Republicans are against him. This recently became amply clear on health care reform issue. And the Afghan war is certainly much more contentious.

The Democratic Party is concerned about maintaining its slim Congressional majority, with some Democrats struggling to win back their seats. Overall, the Democrats in Congress are losing their edge on the Republicans according to a recent Washington Post-ABC News poll, slipping from 56% in February to 48% in September. The American voters are also divided on the war issue along party lines. Democrats look upon this war as essentially a Republican enterprise, which is why only 33% believe that the war must be won to be a success and 59% say it can be a success without being won. This is against 66% Republicans who believe it must be won to be a success and 27% believing it to be otherwise. Then, only 17% Democrats support an increase of troops versus 39% Republicans. Obama and Congressional Democrats cannot afford to ignore these numbers.

Obama’s ability to argue in favor of escalating the war is severely curtailed by its bleak outlook. Taliban attacks and U.S. casualties have risen to their highest numbers in the eight-year-old war and calls for bringing the troops home are now getting louder. So for now, he is backtracking a bit and downplaying the issue by saying he will resist any attempt to rush him until he has “absolute clarity about what the strategy is going to be.”

But he must decide in the next few weeks whether it is worth taking the political risk of allocating more troops and resources to fight the Taliban and Al Qaeda, when the outcome remains uncertain at best.