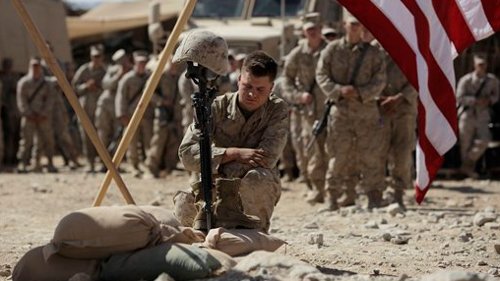 Americans have lost their ability for introspection, thereby revealing their astounding hypocrisy to the world.

US War Secretary Robert Gates has condemned the Associated Press and a reporter, Julie Jacobson, embedded with US troops in Afghanistan, for taking and releasing a photo of a US Marine who was wounded in action and died from his injury.

The photographer was on patrol with the Marines when they came under fire. She found the courage and presence of mind to do her job. Her reward is to be condemned by the warmonger Gates as “insensitive.” Gates says her employer, the Associated Press, lacks “judgment and common decency.”

The American Legion jumped in and denounced the Associated Press for a “stunning lack of compassion and common decency.”

To stem opposition to its wars, the War Department hides signs of American casualties from the public. Angry that evidence escaped the censor, the War Secretary and the American Legion attacked with politically correct jargon: “insensitive,” “offended,” and the “anguish,” “pain and suffering” inflicted upon the Marine’s family. The War Department sounds like it is preparing a harassment tort.

Isn’t this passing the buck? The Marine lost his life not because of the Associated Press and a photographer, but because of the war criminals–Gates, Bush, Cheney, Obama, and the US Congress that supports wars of naked aggression that serve no American purpose, but which keeps campaign coffers filled with contributions from the armaments companies.

Marine Lance Cpl. Joshua M. Bernard is dead because the US government and a significant percentage of the US population believe that the US has the right to invade, bomb, and occupy other peoples who have raised no hand against us but are demonized with lies and propaganda.

For the American War Secretary it is a photo that is insensitive, not America’s assertion of the right to determine the fate of Afghanistan with bombs and soldiers.

The exceptional “virtuous nation” does not think it is insensitive for America’s bombs to blow innocent villagers to pieces. On September 4, the day before Gates’ outburst over the “insensitive” photo, Agence France Presse reported from Afghanistan that a US/Nato air strike had killed large numbers of villagers who had come to get fuel from two tankers that had been hijacked from negligent and inattentive occupation forces:

“‘Nobody was in one piece. Hands, legs and body parts were scattered everywhere. Those who were away from the fuel tanker were badly burnt,’ said 32-year-old Mohammad Daud, depicting a scene from hell. The burned-out shells of the tankers, still smoking in marooned wrecks on the riverbank, were surrounded by the charred-meat remains of villagers from Chahar Dara district in Kunduz province, near the Tajik border. Dr. Farid Rahid, a spokesperson in Kabul for the ministry of health, said up to 250 villagers had been near the tankers when the air strike was called in.”

What does the world think of the United States? The American War Secretary and a US military veterans association think a photo of an injured and dying American soldier is insensitive, but not the wipeout of an Afghan village that came to get needed fuel.

The US government is like a criminal who accuses the police of his crime when he is arrested or a sociopathic abuser who blames the victim. It is a known fact that the CIA has violated US law and international law with its assassinations, kidnappings and torture. But it is not this criminal agency that will be held accountable. Instead, those who will be punished will be those moral beings who, appalled at the illegality and inhumanity of the CIA, leaked the evidence of the agency’s crimes. The CIA has asked the US Justice (sic) Department to investigate what the CIA alleges is the “criminal disclosure” of its secret program to murder suspected foreign terrorist leaders abroad. As we learned from Gitmo, those suspected by America are overwhelmingly innocent.

The CIA program is so indefensible that when CIA director Leon Panetta found out about it six months after being in office, he cancelled the program (assuming those running the program obeyed) and informed Congress.

Yet, the CIA wants the person who revealed its crime to be punished for revealing secret information. A secret agency this unmoored from moral and legal standards is a greater threat to our country than are terrorists. Who knows what false flag operation it will pull off in order to provide justification and support for its agenda. An agency that is more liability than benefit should be abolished.

The agency’s program of assassinating terrorist leaders is itself fraught with contradictions and dangers. The hatred created by the US and Israel is independent of any leader. If one is killed, others take his place. The most likely outcome of the CIA assassination program is that the agency will be manipulated by rivals, just as the FBI was used by one mafia family to eliminate another. In order to establish credibility with groups that they are attempting to penetrate, CIA agents will be drawn into participating in violent acts against the US and its allies.

Accusing the truth-teller instead of the evil-doer is the position that the neoconservatives took against the New York Times when after one year’s delay, which gave George W. Bush time to get reelected, the Times published the NSA leak that revealed that the Bush administration was committing felonies by violating the Foreign Intelligence Surveillance Act. The neocons, especially those associated with Commentary magazine, wanted the New York Times indicted for treason. To the evil neocon mind, anything that interferes with their diabolical agenda is treason.

This is the way many Americans think. America uber alles! No one counts but us (and Israel). The deaths we inflict and the pain and suffering we bring to others are merely collateral damage on the bloody path to American hegemony.

The attitude of the “freedom and democracy” US government is that anyone who complains of illegality or immorality or inhumanity is a traitor. The Republican Senator Christopher S. Bond is a recent example. Bond got on his high horse about “irreparable damage” to the CIA from the disclosures of its criminal activities. Bond wants those “back stabbers” who revealed the CIA’s wrongdoings to be held accountable. Bond is unable to grasp that it is the criminal activities, not their disclosure, that is the source of the problem. Obviously, the whistleblower protection act has no support from Senator Bond, who sees it as just another law to plough under.

This is where the US government stands today: Ignoring and covering up government crimes is the patriotic thing to do. To reveal the government’s crimes is an act of treason. Many Americans on both sides of the aisle agree.

Yet, they still think that they are The Virtuous Nation, the exceptional nation, the salt of the earth.