The Rejection of Palestinian Self-Determination: A Review 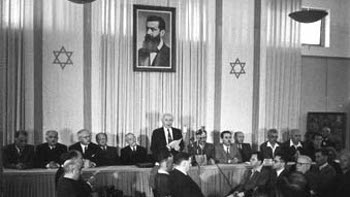 David Ben-Gurion unilaterally declares the existence of the state of Israel, May 14, 1948

This review was first published in the Palestine Chronicle.

The Rejection of Palestinian Self-Determination: The Struggle for Palestine and the Roots of the Israeli-Arab Conflict. Jeremy R. Hammond. Lulu, 2009.

The story of Palestine is poorly represented in western media, generally taken out of context and generally — as a strong cohort to the lack of context — with a strong bias in favor of the Israeli perspective. That perspective in short is that of Arab terrorist aggression against the ‘democratic’ Israeli state, the victim. There is an increasing library of well written material that denies that simplistic view and ties it into the longer course of Zionist history. A new addition to this library, “The Rejection of Palestinian Self-Determination” provides a concise, clear, and valuable summary to the context. 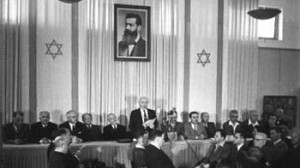 David Ben-Gurion unilaterally declares the existence of the state of Israel, May 14, 1948

It highlights the Zionist intent to deny the Palestinians their lands and their democratic rights using several methods of persuasion. The argument of the Arab people being “barbarians” and lacking in “modernity” was accompanied by the even more illusory position that the land was essentially unoccupied. The corollary from the biblical perspective was that the land belonged to the Jewish people, a belief that provided much sanctimonious support from western countries. From that, the Palestinians were consistently denied the right of self-determination, regardless of the fine sounding rhetoric of the League of Nations and the various committees and commissions that worked on the problem.

Jeremy Hammond has provided an excellent precis of the many letters, commissions, agreements, and discussions that occurred prior to the nakba. Well referenced, using original source material, his theme is well supported. His “goal here is to dispel a number of persistent myths about the conflict and establish through examination of the historical record that its root cause is the rejection by Zionist Jews, Great Britain, the United States, and even the United Nations of Arab Palestinians’ right to self-determination.” From that thesis “must follow rejection of the view that the violence is inevitable and there can be no solution.”

Rejection by any means

Palestinian rejection has always been a part of the Zionist methodology for obtaining control of Eretz Israel. Even while accepting partition, it is only seen as a means to an end as expressed by David Ben-Gurion who argued,

that after we become a strong force, as the result of the creation of a state, we shall abolish partition and expand to the whole of Palestine. . . . The state will only be a stage in the realization of Zionism and its task is to prepare the ground for our expansion into the whole of Palestine by a Jewish-Arab agreement. . . . The state will have to preserve order not only by preaching morality but by machine guns, if necessary.

Ben-Gurion reiterated these views in a letter saying, “A partial Jewish state is not the end, but only the beginning.”

These views are consistent with the various dialogues and discussions from the initial proposals of Zionism through to the United Nations Resolution 181 (a non-legal text) providing the impetus towards partition. To continue with the Ben-Gurion [1] quotes (provided in an account by Shlomo Ben-Ami), he declared,

“The Arabs of the Land of Israel have only one function left to them—to run away.” ….And they did; panic-stricken, they fled in the face of massacres in Ein Zeitun and Eilabun, just as they had done in the wake of an earlier massacre in Deir Yassin. Operational orders, such as the instruction from Moshe Carmel, the Israeli commander of the northern front, “to attack in order to conquer, to kill among the men, to destroy and burn the villages,” were carved into the collective memory of the Palestinians, spawning hatred and resentment for generations.

The British were the original supporters of the Zionist enterprise, with much rhetoric about civilizing the world and applying democracy and justice to all, with “the future government of these regions…based upon the principle of the consent of the governed”. While trying to gain the support of the Arab population these declarations “were really part of a cynical and duplicitous game designed only to help ensure British hegemony over the region.” Lord Balfour recognized the contradictory claims of Britain, of supporting the Zionists while at the same time trying to placate the indigenous Arab population. Discussing the situation with U.S. Supreme Court Justice Louis Dembitz Brandeis, “Palestine”, he explained, “should be excluded from the terms of reference because the powers had committed themselves to the Zionist programme which inevitably excluded numerical self-determination.”

Support from the U.S. began early, if not as complete as it is today, it manifested itself for the same reasons. The Anglo-American Committee noted Palestine’s geographic and “strategic importance”, and that it is “deeply involved in the business and politics of the international trade in oil” with a pipeline to refineries at the port of Haifa. “A U.S. arrangement with the Saudi kingdom might mean a second pipeline there, as well.”

Along with the interest in oil was the Palestinian rejection. Truman’s solution from the Committee was to admit 100,000 Jews “not into the U.S., but ‘into Palestine’ (it being then, as now, simply a matter of faith—an assumption that regularly passes without comment—that the U.S. has the authority to declare policy on behalf of other people in other lands).” The double standards of the U.S. and other western nations of promoting democracy for some and denying it to others has been a consistent platform of U.S. foreign policy, “This ‘solution’, Truman declared, without evidence, would be supported by American public opinion. The public opinion of the majority in Palestine, once again, though well known, was of zero consideration.”

The history of the Palestinian rejection is full of these double standards. Democracy, terrorism, land tenure and ownership, economic conditions were all evaluated on two standards, that of the supposedly progressive Israeli western view as compared to the supposedly non-existent state of Palestine. Democracy and self-determination are of course the big issues, as the Palestinians were consistently denied as a people and as a state, the latter partly on the spurious argument that because they had never had a state, they could not form one now (an argument that raises double standards in many regions of the world).

Even while acknowledging that democracy was being denied counter to their own belief systems, those beliefs were simply overlooked in order to help in the acquisition of the ‘Jewish Homeland’: “the committee [UNSCOP] acknowledged candidly that under the Mandate ‘the principle of self-determination . . . Was not applied to Palestine, obviously because of the intention to make possible the creation of the Jewish National Home there’, which, along with the Mandate itself, was recognized to be ‘counter to that principle’ of democracy….”

In his most concise criticism of Zionism, Hammond says, “The entire Zionist case was outrageous. Its arguments were spurious, prejudiced and hypocritical to the extreme.” While I have extracted only a few highlights, his arguments and sources consistently support this summary criticism. There is no logic to any of the many committees and decisions made about Palestine other than the logic of western conceit (and probably their own anti-Semitic views, as the Jews were essentially denied entry to most western countries) and Zionist arrogance.

As he stated at the beginning of his writing, Hammond rejects the idea that “violence is inevitable.” I would look forward to another work from Hammond outlining his views as to the possible non-violent solutions that he envisions. If written with the same clarity and precision of argument, it would be well worth the read — however any work using logic would have a hard time arguing against a belief system that operates on double standards and self-righteousness.

This short text, obviously not comprehensive, is an excellent summary source of material outlining the consistency of “The Rejection of Palestinian Self-Determination” mainly from the Balfour Declaration through to the UN Partition plan. It is clearly written, providing a succinct summary of the various letters, documents, and committees that worked on the cause of a Jewish homeland in Palestine. For anyone considering arguments about the Palestinian-Israeli problem, this work should become a necessary short primer into the double standards used to reject Palestinian democracy.

[1] Ben-Gurion played a central role in the creation of the Israeli atomic bomb, see Michael Karpin, The Bomb in the Basement. Simon & Schuster, 2006.

The Rejection of Palestinian Self-Determination is available from: http://www.lulu.com/content/paperback-book/the-rejection-of-palestinian-self-determination/7574140.