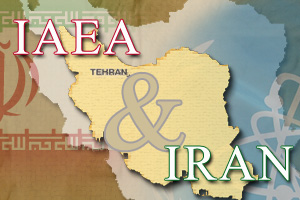 The New York Times is putting out its standard fare on Iran’s nuclear program as the International Atomic Energy Agency (IAEA) releases its latest report. Under the headline “Atomic Agency is Pressed on Iran Records”, the Times reported last week that the U.S. is “pressing” the IAEA “to make public evidence that they believe points toward an Iranian drive to gain the ability to build a nuclear weapon, part of a broad effort to build a case for far more punishing sanctions against the country.”

This information is from “documents and computer files” that Iran insists “are fabrications”. But the IAEA, “according to current and former officials there, has studied them with care and determined that they are probably genuine.”

The Times continues: “‘What we and all the allies are pressing for is for the full case to be laid out, in public,’ one senior Obama administration official said last week, speaking anonymously because he was discussing intelligence data.”

We learn that “The Obama administration’s effort to make the case public contrasts with the approach of President George W. Bush”, because “Bush administration officials said they lacked the credibility to make public the evidence about Iran’s nuclear efforts. Mr. Bush admitted as much in 2005, saying that the case would have to be made quietly.”

Furthermore, under Bush, “American intelligence agencies had balked at publishing some of their most sensitive discoveries, including data stripped from a laptop computer slipped out of the country by an Iranian nuclear engineer.”

The Director General of the IAEA, Mohamed ElBaradei, we are told, has “resisted a public airing” of the damning information against Iran, “fearing that such a presentation would make the agency appear biased toward the West in the effort to impose what Secretary of State Hillary Rodham Clinton recently called ‘crippling’ sanctions.”

Moreover, ElBaradei “has argued for allowing Iran to maintain a token capacity to produce uranium under strict inspection”. And he “has said that the evidence does not create an airtight case against Iran.” And while “a high-level dispute had broken out” at the IAEA “over whether the report should include” this information, “Dr. ElBaradei has remained cautious,” and so “it was unlikely that much of the material would be included in the report.”

Some of this damning information, the Times informs us, was shared with member countries by the IAEA in a closed meeting in February of last year. But news of the meeting “quickly leaked” and we learned that the IAEA official presenting the information said it was “not consistent with any application other than the development of a nuclear weapon”.

So, you see, in the version of reality fit for print, the IAEA is keeping credible evidence from the public that shows that Iran has a nuclear weapons program. The U.S. itself has admittedly kept this information under wraps in the past, but now there is a change of course under the Obama administration, which wants this information made public. The head of the IAEA, on the other hand, supports Iran’s efforts to enrich uranium, despite having knowledge of this evidence that they are trying to build the bomb.

And so, if we draw the proper conclusion (which is to say, the conclusion we are supposed to arrive at), when the IAEA’s report doesn’t find Iran in breach of its obligations under the non-proliferation treaty (NPT), we will know that it is because the IAEA is engaged in a cover up.

This is a truly remarkable version of events, given the actual facts, which are uncontroversial and acknowledged by the Times either here or elsewhere. The “evidence” in question is information purported to have come from a laptop computer that was purportedly smuggled out of Iran and obtained by U.S. intelligence. The U.S. insists the laptop documents show strong evidence of an Iranian nuclear weapons program. The IAEA refers to them in their reports as “the alleged studies”, appropriately (if we disbelieve the new official version, that is).

There are alternative versions out there. For example, Gareth Porter explained last week that “new evidence came to light last year suggesting that some of the key documents were fabricated or doctored to support the accusation that Iran was working on nuclear weapons. A Vienna-based diplomatic source close to the IAEA told IPS that the reason ElBaradei has never endorsed the ‘alleged studies’ documents is that they have not met his rigorous standards of evidence.”

This is quite a different standard from the one we are told by the Times that ElBaradei  has adopted, which is that the evidence should be “airtight” and not merely reasonably credible or verifiable. The two versions are, needless to say, irreconcilable. Only one can have a basis in reality.

This alternate and now unofficial version presented by Porter has, incidentally, been endorsed by the New York Times in the past. In an article in March last year, for instance, entitled “Meeting on Arms Data Reignites Iran Debate”, the Times disclosed that “While American and energy agency officials say the documents appear real, they cannot definitively authenticate them or tie them to Iran.”

But for the updated version, this becomes an IAEA determination “that they are probably genuine”; not exactly the same thing, but close enough for the Times.

Other elements of the story have been updated, too. For instance, the Bush administration had “decided to let the atomic energy agency confront Iran with what it says is the best evidence of Iranian weapons work”, but only behind closed doors. Back then, “the Bush administration has refused requests”—including, though the Times doesn’t mention it, by the IAEA—“to make it public.”

This past U.S. refusal is acknowledged in the new version. What has changed is that, back then, what the IAEA did with this information was dictated by the will of Washington, whereas now we have a rogue IAEA that is defying the Obama administration in keeping the evidence out of the limelight.

The Times makes no effort whatsoever to explain the glaring contradictions in this updated version. For instance, why, if the U.S. wants the IAEA to make this information public, must senior administration officials speak anonymously when discussing the “intelligence data”? We may assume that the reason for anonymity is that this data is still classified, but we learned in the 2008 version of events that “the data has been declassified”.

We are apparently also meant to presume that the IAEA is now, in a complete role reversal, dictating to the Obama administration what it can or cannot do with its own intelligence information. But it’s even better if we put such pestering questions out of mind and refrain from drawing conclusions or attempting to reconcile contradictions. The IAEA is being bad. That is all we really need to know.