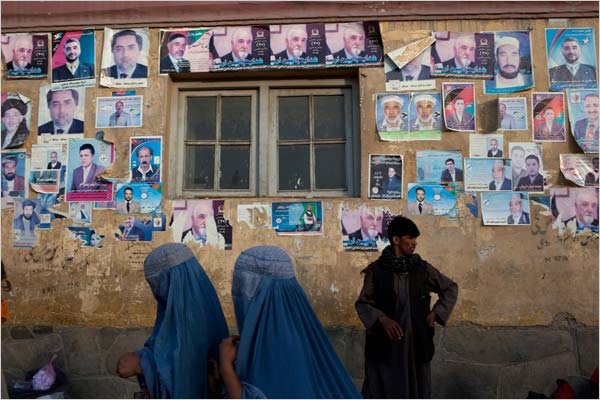 Couple of hours later I heard my mobile phone ringing. I leaped to answer it. It was my friend again. “Moign, come online again,” Adeel said and burst into a laughter. He reassured me that everything is alright and he’s got many things to tell me. While the online connection with him was shaky I hoped his experience was not better than I can imagine.

“It was our ‘friends’ from the Afghan National Army. They said they were doing security checks and making sure that ‘bad guys’ are not moving in their area,” he said with a cheeky smile. “They wanted something from us but when I mentioned our links with UN they couldn’t ask for anything,” he said while showing his wallet to me. I couldn’t help but smile…

They soon arrived at the destination after hours long journey. The town, as described by Adeel, was very remote and had few signs of modern living. The dusty alleyways, stacks of hay and firewood, mud-lined walls of houses and roaming sheep and donkeys were hallmarks of any medieval town. Yet dish antennas sprung on almost every roof of the houses in this far-flung town.

“Our challenge is to install communications equipment on that tower up there,” he said while pointing his finger towards a nearby hill. As mentioned earlier, this communications tower will connect this remote town with the rest of the country and provide information to the local population especially the town school and hospital.

“Tell me about the people’s hopes about the upcoming elections,” I said, while Adeel marched towards the communications tower. Hiding his face from direct sunlight he said: “Mixed emotions…but the majority is hopeless. They know that their vote is just a dummy. Actual vote casting will be held in Washington.” 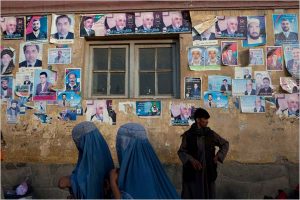 “People are not really happy. They complain that inflation has spiraled out of control while wages dipped. Security has worsened as police and national army walk hand in hand with criminal gangs. Taliban reemerged on the socio-political scene destroying any progress made over the years. Foreign forces operate with impunity and continue to wipe off civilian populations across the country. A myriad of reasons has alienated the masses and dashed their hopes of normal life,” the Afghan driver added.

“I blame Afghans equally for this situation. Instead of uniting they’re divided along ethnic lines. The country’s Pashtun population cannot see a non-Pashtun head of state hence they’ll vote for Hamid Karzai not Abdullah Abdullah or any other ethnic candidate. Their logic: its better to support the bad against the worse,” Adeel said. Karim, himself Pashtun, nodded in agreement.

Afghans routinely accuse foreign occupation troops of being involved in the drug trade, bootlegging, prostitution and human smuggling. And as if these crimes were not enough, war crimes tarnish the image of the so-called ‘peacekeepers’ in the country. While US and coalition keep a record of their fatalities and casualties, the death toll of Afghan civilians is anyone’s guess. No record has ever been maintained since the 2001 invasion of the country and never the results of official inquiries into civilian killings by aerial bombardments or outraged ground troops ever disclosed.

Amnesty International routinely accuses international forces of heavy-handedness and violations of international humanitarian law. It has documented hundreds of civilians deaths in air strikes and indiscriminate military ground attacks that took place across the country. Occupation forces are yet to respond adequately to these reports…

“So will you support the Taliban in their quest to defeat the occupation forces?” I lobbed a thorny question at the driver. “What are you talking about my friend? There is no way we can support these heartless people. May God have some mercy on us…we’re stuck between the devil and the deep sea,” he said while lashing out at both the parties. Adeel explained his rage to me. 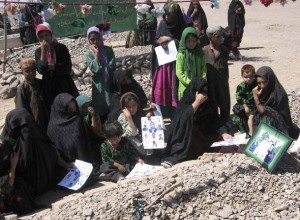 Women and children hold pictures of their dead relatives as they sit around a grave of a relative who was killed during an air strike in western Afghanistan. (Reuters)

“Karim was caught by the Taliban when they were in power 9 years ago. He was traveling in his car in Jalalabad when his vehicle was stopped and checked by the Islamic militia. They found a cassette player and a photograph from his possession and gave him a good beating,” Adeel said while patting his driver’s shoulder. I asked whose photograph it was to which he replied: “It was his sister’s. He was going to his future in laws to show the picture. Taliban made photography a crime punishable to death as they considered it idol worshiping,” he added.

“Though I’m a Pashtun I strongly oppose both the Taliban and Hamid Karzai. Taliban are savage people who terrorize people by committing brutal acts. They not only target foreign aid organizations, people who receive their aid also become victim of their inhuman acts. Slitting throats, killing innocent civilians and foreign aid workers, setting schools alight, kidnapping people etc. What is this? Will this win our hearts and minds?” an agitated Karim said with disgust clear in his tone.

“There is one thing more I’d like to add here Moign,” Adeel hastened to add before he got off his car. “Label it as conspiracy theory or rumor; I’m 100% sure that Taliban leader Mullah Omar, like Osama bin Laden, is just a myth. Has anyone see him after the war?” he argued. “Since nearly a decade, all US and NATO surveillance is focusing on this small country yet they cannot identify the most wanted man.

“These people can do anything for money. I’m surprised that no one has turned him up for 25 million dollars,” the 28 year old said in a sarcastic tone underlining the fact that greed among many Afghan people has reached enormous heights. As a result, old enmities have reignited once again and the society has become fragmented than ever.