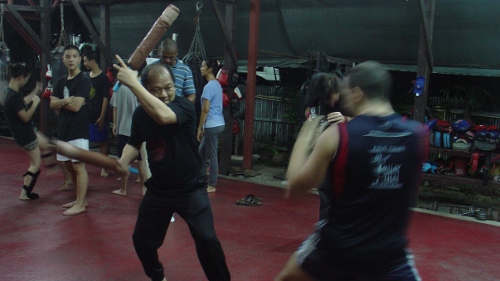 Muay Thai Chaiya has almost no similarity to modern, sport Muay Thai. In fact, it is so different, that nothing I have done in the past–not my boxing, my kick boxing, or Muay Thai–can help me in the ring with a Muay Thai Chaiya fighter. The body mechanics and the movements are so different than any other martial art that they have to be learned from scratch. 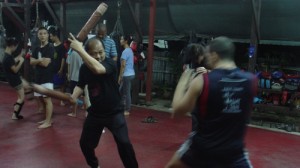 Normally we think a fight is a battle of opponents, not arts, but in the case of Chaiya, it is the art that wins.

I was so taken by the art, that I have done the unimaginable; at the age of 42, and after having studied countless martial arts around the world with various teachers, I have submitted myself to a master, Kru Lek, and begun training as a beginner in a fighting art. It pains my ego to be in a class of children and women and people with not even a tenth of my martial arts background, and to see that all of them are better at Chaiya than I am.

Most will learn Chaiya for the art and for exercise and culture, but the ones who fight, fight extremely well. Chaiya fighters aren’t trying to develop muscles, physical strength, or even toughness. Instead, they are practicing their drills and movements over and over again until they are automatic, perfect. As a rule, the best Muay Chaiya fighter will be the one who logged the most hours practicing Muay Chaiya. It is pretty straight-forward; cross training won’t help at all. You learn Chaiya by practicing Chaiya.

With the exception of having to harden your shins, they don’t require toughness because they just don’t get hit very much.

All of their movements are based on a rocking horse. Their torso pivots and they strike in one direction, which sets them up for a strike in the other direction. They don’t leap like Tony Jaa and Muay Boran, but they hop. At first, I thought the hopping was part of showboating and I wasn’t interested in learning it. Now I understand that hopping is a way of changing balance and direction instantly, with no loss of motion. Hopping makes the fighter unbelievably fast. Kick with the left foot, hop, and at the same time kick with the right foot; hop, spin, and kick backwards. All of the while, the torso is rocking, taking the face and body out of the range of the opponent’s strikes.

When you strike a Muay Chaiya fighter, the only targets in range are his shins and elbows, which you really don’t want to strike.

When I first arrived at the Muay Thai Chaiya school at Baan Chang Thai, with Kru Lek, I thought the regimented series of excerises they did every session were simply to build strength, stamina, and balance. After a month of sparring, I realized that every exercise has a practical application. In fighting the Muay Chaiya guys, I see the exercises. In each of their movements in both offense and defense, I can see the specific exercises we practiced in class.

I did two “Martial Arts Odyssey” episodes about Muay Chaiya. Then I worked with Robert Clyne, of “The Art of Fighting,” to do an episode on the art. Afterwards, we realized we hadn’t done the art justice. Now that I have been training with Kru Lek, I realize the depth of the art. We are currently working on a much deeper, longer documentary to attempt to explain what is so special about Muay Thai Chaiya.

Here are links to my show, Robert’s show, and to trailers for the movie “Muay Thai Chaiya” which feaures Kru Lek’s leading student, Prawit Kittichanthira (Tae), who also appears in Martial Arts Odyssey.

Another trailer for the Muay Chaiya movie