“From the air I saw zebra-striped mountains draped with snow. I heard a call from inside that said ‘Adeel you belong to this place’. It was all too surreal. I felt like I’ve developed a connection with the land even before landing on it. Very strange.”

Adeel Mukhtar Khan comes from a family that has roots in both India and Afghanistan. “Our forefathers migrated to India probably during the Mughal empire’s era. There was a time when Afghan kings raided India and captured the wealth and took it back with them to their lands. My elders believe we settled in India during the 11th century Afghan raids and left India for Pakistan only when the British partitioned it in 1947,” Adeel shed some light on his family background. He added that his family is part of the influential ‘Yusufzai’ Pashtun tribe .

Adeel is among the thousands of foreigners living and working in Afghanistan who are helping to build the country’s non-existent infrastructure. Over the last 30 years, this central Asian republic has seen nothing but invasions, war, infighting and foreign occupation. While the people of this nation have gone through the worst crisis of the century, which is a concoction of war crimes, crimes against humanity, genocide and ethnic cleansing, the infrastructure too has been razed to the ground. Afghanistan is so backward that it can be advertised as a 14th century holiday destination where people can fulfill their time travel fantasies…

“I came here for many reasons. First of all, I wanted to do something out of the box after finishing my bachelors degree. My soul was looking for something different. And for my adventurous nature, Afghanistan was the perfect destination to live and work,” he elaborated when I asked his reasons to move to such a difficult and dangerous country. Describing what he saw when he arrived in Kabul in early 2005, the 28 year-old communications engineer who works for a United Nations sub contractor firm said: “I thought it would be just camps and tents everywhere in the middle of a war zone. But opposite to that…I found it like a proper yet nearly destroyed city,” he said with a big laugh.

It was after a long time I came in contact with my old friend. I always knew him as a guy always up for fun and challenges. I wondered what uphill tasks he had in stock this time.

“Well, tomorrow I’m going to a location outside Kabul. I can’t disclose the location due to security concerns. However, I’ll give you the information of our mission if you like,” he said with a big grin on his face. It didn’t take time for me to figure out the reason for this grin. My buddy’s face always glowed once he found out something exciting to do. And I imagined what was coming…

“My team has to install a communications equipment in a remote town. This system is vital for the 5,000 strong population that lives in the town and nearby villages. It will help the newly built hospital and school as well as irrigation control office by connecting them with the national telecommunications network.

“Given the importance of the task, the risks that we face are enormous. Attacks on communication towers and other infrastructure are all time high, thanks to the re-emergence of Taliban and their allies across the country,” he said in a bitter but firm tone.

“So tomorrow is a very important day for us and I will be in touch with you through out my journey,” the young technician vowed excitedly. “You’ll be (virtually) embedded with me,” said Adeel with his signature wink.

Soon I began to wonder about his daunting life in one of the most dangerous city of the world. Despite my best attempts I could only think about terrorist attacks, aerial bombings, suicide bombings, road-side bombings and all atrocities that have become a commonplace in the war-torn country. I couldn’t help but admire his courage and spirit.

I asked more about the challenges he had to face when he arrived in Kabul more than four years ago.

“The tasks that I faced when I came here were gigantic. I had to work and live in the same place which limited my movement. Had to settle into a dry and harsh Kabul climate that is known for its unkind winters. On top of it, I had to keep a low profile,” the young extrovert said with a grin on his face. He added that his Pakistani identity could have landed him in trouble easily as four years ago there was an anti-Pakistan sentiment in the air.

“The suspicions still prevail but have toned down now,” he said while maintaining an uneasy smile on his face. “Why is it that you’re smiling?” I asked him with surprise, to which he replied: “It is because I understand their sentiments and reasons to be like this. While the West is hated for its military intervention in the country, Afghans have their own reasons to hate Pakistan. They rue Islamabad’s alleged support for the Taliban and political intervention in country’s internal affairs. 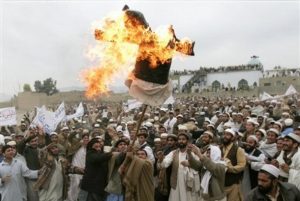 A typical Afghan protest march. Demonstrators burn effigies and flags of their opponents and chant slogans against them. At times, such demonstrations turn violent. (AP)

“But there is another big reason that is overlooked most of the times,” Adeel said after banging his fist on the table. “They’re deprived people. They’ll hate any neighoring country that is better off if compared to them. I believe they have the right to hate foreign governments including the Pakistani government. But not the people because when you hate someone too much…. You later on find yourself to be similar to the one you hate,” the sharp-witted telecommunications expert point out.

And if these challenges were not enough for the newly-arrived adventurer, routine explosions and bombings in Kabul were enough to test his, what he calls, ‘nerves of steel’.

I saw Adeel running fingers in his dark, short beard. He cracked a few jokes about Kabul, the non-governmental organisations based in the country, warlords, foreign troops and their translators, and the fountains of wealth that ooze money day and night. Smiling, I asked if some of these could be published here to which he laughed. “These jokes are widely circulated in the city. They’re a common knowledge. But what the readers need to know is something different,” he quipped.

“It was chaos when I arrived here. Ministries were newly born but no one knew how to run them. It was a killing frenzy amidst a sudden vacuum of power. Money emerged like lava from a volcano. Everyone wanted to have bit of a splash,” he continued in an unsettling tone. With a big surprise on his face, he said: “I know many people who wandered on the streets on their cycles. Now they roam in expensive cars. Not one but three of them.” 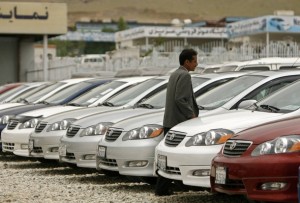 Gauging the growing surprise and curiosity on my face he explained that translators and NGO employees are the people who benefited the most from the new found wealth. “Yes. These all are Afghans. The ones who speak good English work as translators and earn as much as $200 per hour. Some of them have strong family ties. They control their tribes and collaborate with the US and coalition forces for which they’re paid handsomely,” he explained.

I asked him if he’s going out somewhere tonight. He answered: “Security is not so bad during daytime. There are checkpoints everywhere that are manned by the police. It gets worse after sunset. You will rarely find people outside. It becomes something like a ghost town.”

He went on to describe the security situation in the city. “Despite all the security arrangements, violent incidents occur almost daily. The funny thing is that whoever wants to wreak havoc comes in and does it. They can’t do anything about it. I used to receive NATO security updates through UNDP. All the information, even the color and number plate of the car, is mentioned in the handout but still they can’t stop incidents from happening,” the Kabul-based engineer revealed.