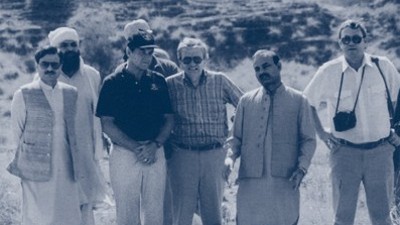 In an exclusive interview with Foreign Policy Journal, retired Lt. Gen. Hamid Gul responds to charges that he supports terrorism, discusses 9/11 and ulterior motives for the war on Afghanistan, claims that the U.S., Israel, and India are behind efforts to destabilize Pakistan, and charges the U.S. and its allies with responsibility for the lucrative Afghan drug trade.

Retired Lieutenant General Hamid Gul was the Director General of Pakistan’s Inter-Services Intelligence (ISI) from 1987 to 1989, during which time he worked closely with the CIA to provide support for the mujahedeen fighting the Soviet occupation of Afghanistan. Though once deemed a close ally of the United States, in more recent years his name has been the subject of considerable controversy. He has been outspoken with the claim that the terrorist attacks of September 11, 2001 were an “inside job”. He has been called “the most dangerous man in Pakistan”, and the U.S. government has accused him of supporting the Taliban, even recommending him to the United Nations Security Council for inclusion on the list of international terrorists.

In an exclusive interview with Foreign Policy Journal, I asked the former ISI chief what his response was to these allegations. He replied, “Well, it’s laughable I would say, because I’ve worked with the CIA and I know they were never so bad as they are now.” He said this was “a pity for the American people” since the CIA is supposed to act “as the eyes and ears” of the country. As for the charge of him supporting the Taliban, “it is utterly baseless. I have no contact with the Taliban, nor with Osama bin Laden and his colleagues.” He added, “I have no means, I have no way that I could support them, that I could help them.”

After the Clinton administration’s failed attempt to assassinate Osama bin Laden in 1998, some U.S. officials alleged that bin Laden had been tipped off by someone in Pakistan to the fact that the U.S. was able to track his movements through his satellite phone. Counter-terrorism advisor to the National Security Council Richard Clarke said, “I have reason to believe that a retired head of the ISI was able to pass information along to Al Qaeda that the attack was coming.” And some have speculated that this “retired head of the ISI” was none other than Lt. Gen. Hamid Gul.

When I put this charge to him, General Gul pointed out to me that he had retired from the ISI on June 1, 1989, and from the army in January, 1992. “Did you share this information with the ISI?” he asked. “And why haven’t you taken the ISI to task for parting this information to its ex-head?” The U.S. had not informed the Pakistan army chief, Jehangir Karamat, of its intentions, he said. So how could he have learned of the plan to be able to warn bin Laden? “Do I have a mole in the CIA? If that is the case, then they should look into the CIA to carry out a probe, find out the mole, rather than trying to charge me. I think these are all baseless charges, and there’s no truth in it…. And if they feel that their failures are to be rubbed off on somebody else, then I think they’re the ones who are guilty, not me.”

General Gul turned our conversation to the subject of 9/11 and the war on Afghanistan. “You know, my position is very clear,” he said. “It’s a moral position that I have taken. And I say that America has launched this aggression without sufficient reasons. They haven’t even proved the case that 9/11 was done by Osama bin Laden and al Qaeda.” He argued that “There are many unanswered questions about 9/11,” citing examples such as the failure to intercept any of the four planes after it had become clear that they had been hijacked. He questioned how Mohammed Atta, “who had had training on a light aircraft in Miami for six months” could have maneuvered a jumbo jet “so accurately” to hit his target (Atta was reportedly the hijacker in control of American Airlines Flight 11, which was the first plane to hit its target, striking the North Tower of the World Trade Center at 8:46 am). And he made reference to the flight that hit the Pentagon and the maneuver its pilot had performed, dropping thousands of feet while doing a near 360 degree turn before plowing into its target. “And then, above all,” he added, “why have no heads been rolled? The FBI, the CIA, the air traffic control — why have they not been put to question, put to task?” Describing the 9/11 Commission as a “cover up”, the general added, “I think the American people have been made fools of. I have my sympathies with them. I like Americans. I like America. I appreciate them. I’ve gone there several times.”

At this point in our discussion, General Gul explained how both the U.S. and United Kingdom stopped granting him an entry visa. He said after he was banned from the U.K., “I wrote a letter to the British government, through the High Commissioner here in Islamabad, asking ‘Why do you think that — if I’m a security risk, then it is paradoxical that you should exclude me from your jurisdiction. You should rather nab me, interrogate me, haul me up, take me to the court, whatever you like. I mean, why are you excluding me from the U.K., it’s not understandable.’ I did not receive a reply to that.” He says he sent a second letter inviting the U.K. to send someone to question him in Pakistan, if they had questions about him they wanted to know. If the U.S. wants to include him on the list of international terrorists, Gul reasons, “I am still prepared to let them grant me the visa. And I will go…. If they think that there is something very seriously wrong with me, why don’t you give me the visa and catch me then?”

I turned to the war in Afghanistan, observing that the ostensible purpose for the war was to bring the accused mastermind of the 9/11 attacks, Osama bin Laden, to justice. And yet there were plans to overthrow the Taliban regime that predated 9/11. The FBI does not include the 9/11 attacks among the crimes for which bin Laden is wanted. After the war began, General Tommy Franks responded to a question about capturing him by saying, “We have not said that Osama bin Laden is a target of this effort.” The Chairman of the Joint Chiefs of Staff, Richard Myers, similarly said afterward, “Our goal has never been to get bin Laden.” And President George W. Bush himself said, “I truly am not that concerned about him.” These are self-serving statements, obviously, considering the failure to capture bin Laden. But what, I asked General Gul, in his view, were the true reasons for the invasion of Afghanistan, and why the U.S. is still there?

“A very good question,” he responded. “I think you have reached the point precisely.” It is a “principle of war,” he said, “that you never mix objectives. Because when you mix objectives then you end up with egg on your face. You face defeat. And here was a case where the objectives were mixed up. Ostensibly, it was to disperse al Qaeda, to get Osama bin Laden. But latently, the reasons for the offensive, for the attack on Afghanistan, were quite different.”