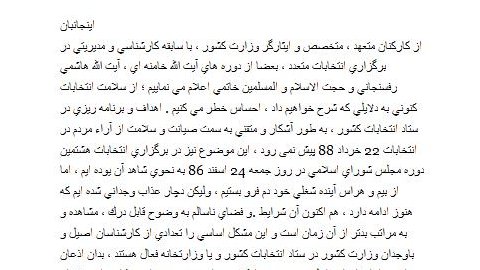 In 2006, EMI worked with the BBC World Service to set up Radio Al Mirbad to broadcast information covering southern Iraq while it was still occupied by the British military. The BBC’s Persian service, of course, has been accused by Iran of fomenting unrest such as by encouraging protests to dispute the election results.

“We stand with them and support them”

On one hand, Niknejad says Tehran Bureau is “not an opposition news organization”. On the other hand, a principle source for her reporting on events in Iran is a member of the Mousavi election campaign, a fact she revealed during an event coordinated to teach people how to show “solidarity” with pro-Mousavi Iranians.

Niknejad is a member of The Arab and Middle Eastern Journalists Association (AMEJA). On June 23, AMEJA held a teach-in to discuss the ongoing events in Iran following the election. The teach-in was webcast on the Voices from Iran website, which was created the day prior to the event and which has little content other than an embedded video of webcast, hosted on USTREAM.

During the event, the terms “pro-Mousavi” and “pro-democracy” were curiously used synonymously, despite an admission at the beginning that calling Mousavi’s campaign “pro-democracy” was perhaps “wishful thinking”.

The first speaker at the event was Arang Keshavarzian, Associate Professor in the Department of Middle Eastern and Islamic Studies at New York University. He spoke on how the protests that erupted following the election were “not spontaneous”, but rather organized by the young volunteers who gravitated to Mousavi’s campaign and had learned how to organize and distribute information prior to the election. Various organizations were also involved, such as women’s organizations, journalist organizations, youth organizations, and others. The protests, he said, were an “outgrowth” of the campaigning in early June.

One prominent organization campaigning for women’s rights in Iran is the Abdorrahman Boroumand Foundation (ABF) in Washington D.C., a recipient of funding from the National Endowment for Democracy, which in turn is mandated financing under U.S. law from the Congress, despite its pretense of being a “non-governmental organization”.

Another group that has received substantial funding from NED is the National Iranian American Council, which has been granted money in part to carry out a “media training workshop” to train participants in public relations and otherwise support groups both within and outside Iran.

Interestingly, Keshavarzian also listed “election irregularities” included in the “fatwa”, including the charge that mobile polling stations the printing of a large number of extra ballots were suspicious activities. He also stated that Mousavi’s campaign headquarters had been attacked, and that all these things were evidence of fraud. Every one of these claims can be traced to Tehran Bureau.

Even more interestingly, he said that the Mousavi campaign had showed great foresight in their pre-election efforts. “Their narrative that they constructed prior to the election fit in nicely into the events after the election”, he said. Presumably, this includes the narrative that the election would be stolen that he had just outlined from information that had appeared before the election took place, such as the “fatwa” letter.

As Paul Craig Roberts has observed, “Mousavi declared his victory several hours before the polls closed. This is classic CIA destabilization designed to discredit a contrary outcome. It forces an early declaration of the vote.”

When Iran declared the results of the election early, the charge was made that “the outcome was declared too soon after the polls closed for all the votes to have been counted”.

Another speaker, journalist Kouross Esmaeli, also a member of AMEJA, addressed the question of how to show “solidarity” with Mousavi’s supporters protesting in the streets. “We stand with them and support them,” he said. But he also urged caution against the perception of U.S. interference and said that any connection of the protests with U.S. “imperialism” would taint them and serve only to undermine them.

Perhaps the most interesting comments, though, came from Niknejad. She explained more about her reporting of events in Iran and her sources from which she would “copy and paste” onto Tehran Bureau. She explained that she used Facebook and other social networking sites for information, until the Iranian government shut such websites down. Then “it was very difficult for us”, she said, to get information.

But she did mention one source that was able to continue to provide information. “I was connected to someone that I know very well”, she explained, “and that I trust very much, who works – who happens to work – at the Mousavi campaign. So we were getting, you know, almost like minute by minute updates on what was going on there.”

Among the information received from the source at the Mousavi campaign was that the campaign headquarters was “stormed by militia” (evidence of election funny-business, remember, from the previous speaker), of which Niknejad emphasized, “I knew it was coming from a very credible source”.

Niknejad also explained how, based on the information this source who “happens” to work for the Mousavi campaign (purely a coincidence), it looked like “Mousavi was winning” early on. This just “happens” to fit perfectly with the “narrative” constructed by the Mousavi campaign early on to be used following the election in order to try to discredit the election and to call for its result to be nullified (surely another strange coincidence).

Niknejad also rightly observed how the information Tehran Bureau would “copy and paste” from sources such as someone working for Mousavi’s campaign was picked up off of Twitter and posted on other blogs, making “Tehran Bureau a source of information” about the election and subsequent events.

Niknejad also claimed that Tehran Bureau was “hacked”, the implication being that it was targeted by the Iranian regime. She explained that when she tried to log on and do other things with the site, it became very slow.

There’s a much simpler explanation for this, which is the enormous increase in bandwidth the new site was faced with (visible in a dramatic spike on Alexa) very suddenly at the time of the election. This alternative explanation would also fit with what she said next, that they had a company called MidPhase that put the website back up. In other words, Tehran Bureau changed hosting plans – no doubt to a plan on a new server that included more bandwidth allocation.

But the claim that the website was “hacked” by the Iranian government fits in much more nicely with the constructed “narrative”.

Another interesting point was made during the question and answer session. One of the panelists warned, without so much as a hint of recognition of the irony, to be wary because there is a lot of “misinformation” coming out on Facebook and Twitter – from the Iranian regime. We have to find sources that we trust, therefore, the panelist continued, like Tehran Bureau, which gets its information from trusted sources like members of Mousavi’s election campaign. Again, there was no indication whatsoever that the speaker was aware of the irony.