The Free Gaza Movement announced in a press release on Tuesday that its boat The Spirit of Humanity had been intercepted by the Israeli navy while en route from Cyprus to the Gaza Strip to deliver humanitarian supplies to the Palestinian people.

The people of Gaza have suffered under an Israeli siege and a three-week military assault code-named Operation Cast Lead that began on December 27 last year.

Israel has been heavily criticized by human rights groups for its actions during that campaign, which included indiscriminate bombing of civilian targets and the use of white phosphorus as a weapon, forbidden under international law. 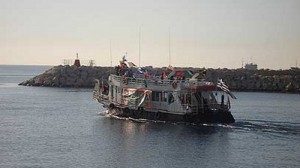 The Israeli navy intercepted the boat, named the Arion but dubbed The Spirit of Humanity by its passengers, boarded it, and then forcibly directed it to Ashdod, Israel.

A military spokesman said, “An Israeli navy force intercepted, boarded and took control of the cargo boat Arion … as it was illegally attempting to enter the Gaza Strip.”

The Israel Naval blockade of Gaza is a violation of international law. When Egypt announced a blockade of the Straits of Tiran in 1967, Israel regarded it as an act of war and launched a surprise attack on June 5, the start of a six-day war in which Israel also invaded and occupied the West Bank and Gaza Strip.

Israel withdrew military forces from Gaza in 2005, only to implement a crippling siege of the small, densely populated territory. It still illegally occupies the West Bank.

The Israeli military said it would send the boat’s humanitarian supplies to Gaza after a security check. The abducted passengers are to be deported.

Among the passengers on the boat was former U.S. Congresswoman Cynthia McKinney, who said, “This is an outrageous violation of international law against us. Our boat was not in Israeli waters, and we were on a human rights mission to the Gaza Strip.”

She asked that the international community demand their release so they could continue their mission to deliver aid to Gaza.

Nobel Peace Prize winner Mairead Maguire was also among the passengers of the boat. “The aid we were carrying is a symbol of hope for the people of Gaza,” she said, “hope that the sea route would open for them, and they would be able to transport their own materials to begin to reconstruct the schools, hospitals and thousands of homes destroyed during the onslaught of ‘Cast Lead’.”

The Cypriot Embassy in Tel Aviv issued a statement saying that permission had been granted by authorities in Cyprus for the boat to depart “on the basis of its declaration that its intended destination was the port of Port Said in Egypt.”

Two other missions by the Free Gaza Movement to deliver humanitarian aid to Gaza, one of which was successful, had also begun in Cyprus.

On Monday, the International Committee of the Red Cross (ICRC) issued a report saying that Gaza’s 1.5 million residents were “trapped in despair”. Israel’s military assault on the Strip razed whole neighborhoods and resulted in massive civilian casualtie.

Israel’s continuing blockade of Gaza, the report said, is “making it impossible for Gazans to rebuild their lives.”