As Daw Aung San Suu Kyi Turns 64, We Must Do More 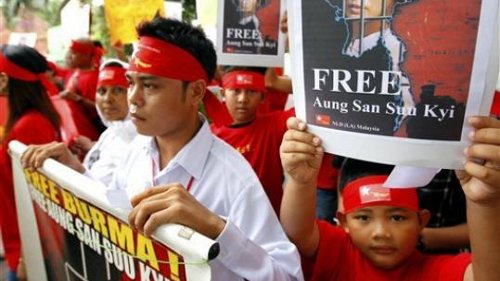 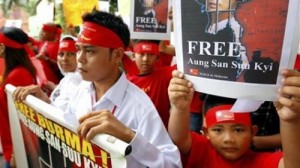 MELBOURNE, June 17 — On June 19, Daw Aung San Suu Kyi will turn 64 years old. Instead of being amongst loved ones and the millions of people in Burma who revere her for standing up for human and civil rights, she is in isolation. There is a genuine possibility that in just a few days, Daw Suu Kyi may be sentenced to five years imprisonment in Insein Prison. Or the cruel agony of further trial delays may be extended.

The groundswell demanding her release matches that given to Nelson Mandela, but thanks to the paranoid leader of the Burmese military junta, Senior General Than Shwe, Daw Suu Kyi may never get to see the light of day again. Daw Suu Kyi’s trial has been delayed once more.

The junta leaders are using every trick in the book to discredit her. They run the courts, appoint the judges, write the laws, and, when all else fails, they resort to ridiculous propaganda. The Burmese Embassy in Hong Kong has declared that John William Yettaw, the American accused of breaking into Daw Suu Kyi’s compound, is Daw Suu Kyi’s “boyfriend” and intended on staying over at her residence.

Senior General Than Shwe’s dream will be complete when the military junta fixes the 2010 polls to guarantee victory. For the despotic regime, this will erase the bitter memories of 1990, when Suu Kyi’s National League for Democracy won 392 out of 452 seats. Only then will the issue of redemption be addressed. For us, it will be another failure to help the innocent people of Burma.

Australia has failed to demonstrate any leadership. Prime Minister Kevin Rudd has been far too quiet. For years, previous governments on both sides of the political spectrum have been asking for a more inclusive role in Southeast Asia. Prime Minister Rudd now has the chance to showcase his regional leadership capabilities by succeeding where ASEAN and individual nations have failed.

But rather than showing genuine leadership and criticising General Than Shwe for his regime’s treatment of Aung San Suu Kyi along with the thousands of political prisoners in jail and millions of civilians living in fear of their lives, Prime Minister Rudd has so far failed to strongly criticize the junta.

In the form of survivor testimony about the tactics used by the regime, there is no shortage of evidence that a genocide is taking place. We cannot afford to keep silent.

Any nation that publicly calls for free and fair elections in Burma in 2010 is blindly endorsing an illegitimate plan that should never be condoned in the first place. These proposed elections are born out of a fraudulent constitutional referendum held in May 2008, immediately after Cyclone Nargis devastated Burma.

The referendum promising democratic elections gained 92 per cent approval without a single question being raised as to their validity, and enshrined a requirement of 25 percent of all parliamentary seats to be reserved for the military. Under Burma’s constitution, a 75 percent majority is required to make any changes to the country’s laws.

What originally commenced as a roar of disapproval over the denial of natural justice to Daw Suu Kyi and indeed the entire civilian population of Burma has now ground to a halt. Now the dissenting voices amount to a regional whisper and are in danger of following the ineffective road taken by Ibrahim Gambari, the Special Envoy for Burma representing the United Nations.

The latest diplomatic failure is from Singapore’s Senior Minister, Goh Chok Tong. Having spent four days inside Burma, Tong indicated that the junta would best serve the national interests by using a “cautious but practical approach”. He even appeared to defend Senior General Than Shwe’s handling of the process by declaring that Shwe could not be blamed for the lack of process because he inherited a military dictatorship that was installed back in 1962. Goh Chok Tong’s words present the overtures that the military junta likes to hear.

No doubt the military regime leaders have been keeping a close eye on developments in Iran. Silently they will already be vowing that no such scenes will be tolerated on the streets of Rangoon, Mandalay and every other city and town in Burma. Their youth network, the Union and Solidarity Development Association (or USDA, of which Senior General Than Shwe is the main patron) has already been active in keeping Aung San Suu Kyi’s supporters away from her trial, and will be undoubtedly be mobilised for the 2010 election. The junta’s network has rightly been compared to the Hitler Youth movement.

The growing demand for change in Iran, while showing similarities to Burma’s ill-fated 1988 and 2007 protests, is unlikely to produce the same catastrophic results in which more than 3,000 people were slaughtered by the junta. Recent accusations of electoral fraud and protests in Tehran by supporters of opposition leader Mir Hossein Mousavi have seen mass crowds take to the streets but the foreign media have had a chance to get into Iran to report on the dissent and in some cases, speak to the people. This is something Burma’s junta-controlled media would never let happen.

Only Daw Suu Kyi can unite a people terrified by decades of war and trauma. For Daw Aung San Suu Kyi’s birthday present, let us keep the candles of hope burning brightly and tell Prime Minister Kevin Rudd, opposition leader Malcolm Turnbull, and all parliamentary representatives in Australia in a clear unified voice that she must be released immediately and unconditionally.

Because Daw Aung San Suu Kyi is Burma’s only true hope for a civilian democracy to bloom.