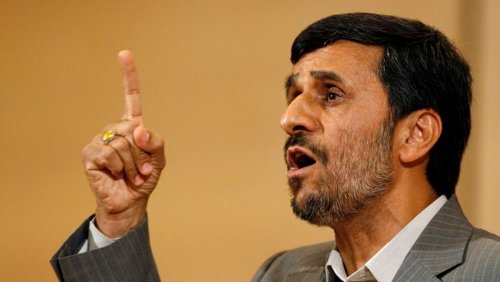 Ahmadinejad himself has used the phrase a number of times ever since he was the mayor of Tehran and running for president. More recently, in a July 2008 interview with NBC News, Ahmadinejad wondered if the United States was finally beginning “a new approach; in other words, mutual respect, cooperation, and justice? Or is this approach a continuation in the confrontation with the Iranian people but in a new guise?”

Some say that where Ahmadinejad is confrontational, Mousavi will be more mollifying. But Ahmadinejad has always been ready for diplomatic engagement with the United States, despite what you may hear constantly in the mainstream media. In fact, the day after Obama’s Al Arabiya interview, Ahmadinejad delivered a speech in the Iranian town of Kermanshah. This is how his speech ended:

We welcome change but on the condition that change is fundamental and on a right course, otherwise the world should know, that anyone with the same speaking manner of Mr. Bush, same language of Mr. Bush, the same spirit of Mr. Bush, adventurism of Mr. Bush, even using new words to speak to the nation of Iran, the answer is the same Mr. Bush and his lackeys received over the years.

We hear that they are making plans for Iran. We in turn wait patiently, listen carefully to their words, carefully assess actions under the magnifying glass and if a real change occurs in a fundamental way, we shall welcome it.

In May, at the request of Barack Obama, the Pentagon updated its plans for using military force against Iran. Secretary of Defense Robert Gates explained that “as a result of our dialogue with the president, we’ve refreshed our plans and all options are on the table.” So much for not advancing threats.

Obama’s appointment of Hillary Clinton as Secretary of State and long-time AIPACer Dennis Ross as top Iran advisor is also troubling. Clinton once threatened to “totally obliterate Iran” if it ever attacked Israel with the nuclear weapons it doesn’t have and has suggested that negotiations with Iran, while doubtfully being fruitful, will be primarily useful to garner support for more “crippling” multilateral sanctions. Also, it has long been said that Ross has advocated an “engagement with pressure” strategy of dealing with Iran which, as Ismael Hossein-Zadeh explains, “means projecting or pretending negotiation with Iran in order to garner broader international support for the US-sponsored economic pressure on that country.” In a recent New York Times Op-Ed, former National Security Council staff members Flynt Leverett and Hillary Mann Leverett relate what Ross revealed to them regarding his cynical strategy:

In conversations with Mr. Ross before Mr. Obama’s election, we asked him if he really believed that engage-with-pressure would bring concessions from Iran. He forthrightly acknowledged that this was unlikely. Why, then, was he advocating a diplomatic course that, in his judgment, would probably fail? Because, he told us, if Iran continued to expand its nuclear fuel program, at some point in the next couple of years President Bush’s successor would need to order military strikes against Iranian nuclear targets. Citing past “diplomacy” would be necessary for that president to claim any military action was legitimate.

They also make it clear that, “the Obama administration has done nothing to cancel or repudiate an ostensibly covert but well-publicized program, begun in President George W. Bush’s second term, to spend hundreds of millions of dollars to destabilize the Islamic Republic. Under these circumstances, the Iranian government — regardless of who wins the presidential elections on June 12 — will continue to suspect that American intentions toward the Islamic Republic remain, ultimately, hostile.”

Even more recently, during his speech in Cairo, Obama, after once again mentioning “mutual respect,” said that “any nation – including Iran – should have the right to access peaceful nuclear power if it complies with its responsibilities under the Nuclear Non-Proliferation Treaty.” Whereas this sounds like an unprecedented admission by a sitting U.S. president, it’s important to remember what Bush said to Charlie Gibson back in 2002 during an ABC News interview: “Matter of fact, I said this in a press conference, that it’s the sovereign right of Iran to have civilian nuclear power, and I agree, and I believe that.”

As Iran Affairs‘ Cyrus Safdari points out, “Arguably, Bush’s statement is more sweeping than Obama’s…compare ‘may have some right’ to ‘has a sovereign right’.” He continues,

In any case, Iran’s absolute and unqualified and unquestionable right to access the full nuclear fuel cycle is based on international law and not for Obama or Bush to decide. Iran has the same rights to nuclear technology (or any other technology) as Japan, Argentina, Brazil, the USA…

Nor is it up to Iran to “prove that its aspirations are peaceful” (code words for “must give up enrichment and forever rely on us to power their economy”.) Iran has signed the NPT and after years of inspections, no evidence has been found of any weapons program. The burden is therefore on Iran’s accusers to prove their allegations, and not vice versa.

Meanwhile, not only is Iran’s nuclear program legal, it is under heavy scrutiny by the IAEA. Just recently, Iran’s ambassador to the IAEA, Ali-Asghar Soltaniyeh, confirmed Tehran’s continued cooperation with the U.N. nuclear agency while at the same time it continues its uranium enrichment activities. He told reporters, “After six years of intrusive and robust inspection and issuance of 24 reports, the director general has once again reported to the world that there is no evidence of any diversion of nuclear material or case of prohibitive nuclear activities.“

Nevertheless, Obama presented Iran on Sunday with a “clear choice” of halting its nuclear and missile activity or facing increased isolation.

Maybe the US just doesn’t like Ahmadinejad, what with his deliberately being mistranslated and intentionally misquoted by Western media. Blamed for threatening to “wipe Israel off the map” (an idiom that doesn’t even exist in Farsi), Ahmadinejad is constantly called a Holocaust denier for questioning why the horrific Nazi genocide of European Jews resulted in the violent displacement and ethnic cleansing of the Palestinian people. Ahmadinejad has never threatened to attack Israel, but rather hopes that the people of Palestine can all – Jews, Christians, and Muslims – vote for whatever type of government system they are to live under. Ahmadinejad’s willingness to bring up issues pertaining to Zionism without worrying about the delicate sensibilities of Western audiences has made him a pariah.

Obviously, it is seldom remembered that, in 2001, the former Iranian president and putative moderate, Hashemi Rafsanjani, who is now heavily supporting Mousavi’s run for office, declared that while Israel would be destroyed by an atomic bomb, the Muslim world would only be damaged by such an attack and “such a scenario is not inconceivable.” Nevertheless, the L.A. Times noted back in 2006, “four years later, when Rafsanjani was running for president, Washington and its European allies were eagerly hoping that he would win.” Apparently, an actual threat of nuclear destruction didn’t seem to bother Western powers at the time. Now all they talk about is a fictitious one.

Still, hopes are that Mousavi will be more tactful in his discussion of Zionism and Israel’s reliance on the Holocaust for its own existential validation. Recently, when asked about his views on the Holocaust, Mousavi said: “Killing innocent people is condemned. The way the issue [Holocaust] was put forward [by Ahmadinejad] was incorrect,” but continued in a manner almost identical to the incumbent president, “Of course the question could be that why Palestinians should be punished for a crime committed by Germans?”

As millions of Iranians flood to the polls today to vote, it may become clear that a vote for Ahmadinejad is more a vote for continued Iranian resistance to US influence and hegemony in the region, whereas a vote for Mousavi is a vote for possible reconciliation based on Iranian fears, American demands, and Israeli paranoia and deception.

And so, it seems that the more things change, the more they stay the same.