Debating Hope for the Forgotten 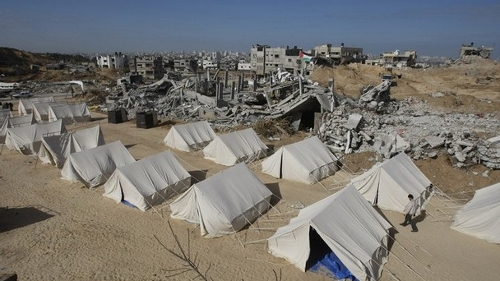 It was Amal’s last day at the university where she studies English language teaching. Despite being the last day of her academic career, the aspirant Gazan teacher is in no mood to take it lightly. She dressed modestly but smartly, grabbed her bag and set off for the university that is hardly 15 minutes away from her house in central Gaza. She insisted that the last day of the academic year would be wrapped up by a debate competition where she is leading a team of three women who are also aspiring to become teachers.

“So why study English and become a teacher?” I asked Amal when she was about to leave her home for the university.

“I want to help my country by expressing their suffering at the hands of the occupation,” Amal told in a firm tone. “Would you be able to do this by being a teacher? I interrupted to gauge her intentions. “I will teach my students English language. Despite all the miseries they still have great will power. They want to study, to struggle for their rights and want to return to their occupied lands. I believe in them. They have great powers,” said Amal resolutely.

Amal is one of the few Palestinians I came in contact with during the Israeli bombardment of Gaza. At that time she was traumatised and her morale was badly shaken by the war. Almost four months later, she seems to have regained her spirits but the recovery seems somehow fragile. Out in public, Amal is a very confident person with a constant glowing smile. She is courteous and always ready to help people around her. But when she is on her own, the 21 year old woman worries about the future of her family and the nation.

On her way to the university, Amal sees nothing but rubble of buildings that were destroyed by Israeli bombardment during its 27-day campaign earlier this year. When I asked her about the reconstruction activity she rebuffed. “What reconstruction? The crossings are still closed and the siege continues to add miseries to the lives of millions of people in Gaza Strip,” the would-be teacher remarked bitterly.

About the condition of thousands of displaced people living in Gaza she added: “Some of them are living in tent camps which we call ‘khaima’. They have nowhere to go and no materials to rebuild their homes. Life in these camps is only about struggle to survive. We see no end to their sufferings.”

Finally, Amal reaches Al-Aqsa University. Her friends were waiting for her impatiently as she is the debate team leader. Some people sat nearby were discussing the newly formed Palestinian cabinet that does not includes any member of Hamas, the Palestinian group that controls Gaza Strip. One of her team member asked about her opinion on the latest political development to which Amal replied: “I do not know. What I know is the government that will work in the favour of Palestinians will succeed. And we want such a government. As a Palestinian, I support both Hamas as well Fatah and hope that they work towards a common cause.”

Quickly, one of her team member drew her attention towards the recent violations of ceasefire in Gaza Strip. “One of my uncles is a fisherman. His boat along with a dozen other boats came under attack by Israeli naval ships. Two of his friends were injured in the shooting incident,” team member Saarah said while lamenting the fact that poor fishermen have to face life-threatening challenges to earn a living and provide food to their families.

The debate team was finalising a long list of issues that today’s Palestinian society is facing. Years long occupation and siege of Gaza Strip has affected each and every family in one way or the other. The recent Israeli bombardment killed and injured thousands of civilians and left hundreds of thousands homeless. The impact on the civilian infrastructure was devastating. Another team member named, Mariam, drew her team’s attention towards the rising food prices in Gaza and crippling shortage of various items essential for leading a normal life. “Everything is scarce. Even the air that we breathe seems to be controlled by our occupiers. Life has its own definition here in Gaza,” the 21 year old Gazan woman added while others nodded their heads in agreement.

While I was looking at my notes and was about to ask the next question, Amal very softly whispered: “Moign, look. I’ll tell you something that happened couple of days ago and left me very sad.” I closed my notepad and drew my attention to her face where her pleasant smile was replaced by a grim sneer. I never had such difficulty reading her face before.

“My life is better than many people here in Gaza as my father works in a well-respected job. But a lot of people here are without money, food, medicines or shelter. They’ve got no work due to the ongoing siege. A few days ago, there was a knock on my door. I opened the door to find out that a friend of mine whom I didn’t see for the past 6 years came to meet me. She had two beautiful children with her, one of them in her arms. I took one of the kids in my arms and made her sit next to me. The young girl giggled when I asked her name,” Amal described while tears began to surface in her eyes.

She added that those two beautiful kids are suffering from Thalassemia. Her husband can’t afford to buy medicines or proper treatment as he is jobless. “My friend begged for help. She told me that she won’t buy medicines for herself though she is a Thalassemia patient herself. I felt really sorry for my school friend who is also pregnant. This is the true face of human suffering in Gaza. Please expose it,” she requested while cleaning her tears that raced from the eyes to her flushed cheeks.

Other participating teams in the hall were scrambling to finalise their topics for the debate. The debate moderators were busy giving final touches to the itinerary. The audience for the debate was queueing outside the hall while peeping from the windows and waving at their friends. The whole atmosphere was electric and Amal and her team felt the real buzz.

I heard Mariam using strong words for someone. Surprised, I turned my attention towards her and asked her who is she annoyed with. “Its Mubarak and his bloody regime,” she said with disgust in her tone. “We Gazans blame Egyptian President Hosni Mubarak equally for our hardships. Instead of supporting us, he is siding with the Israelis and has sealed the Rafah border completely. This is his contributing towards the inhuman crimes perpetrated against the Palestinians,” an enraged Mariam added. Amal did not agree with her and added: “Don’t forget his support to alleviate our suffering and efforts for Palestinian unity. We should never forget that.” Mariam somehow shrugged off her friend’s suggestion.