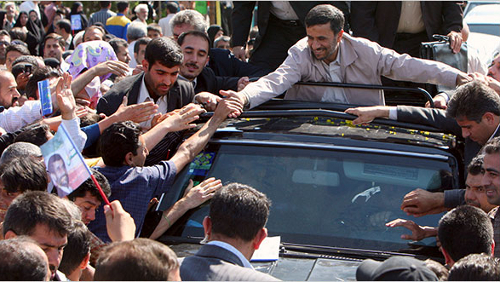 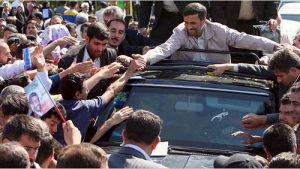 Iran announced on Wednesday that it had successfully tested its Sejil 2 surface-to-surface missile, and Western media sources took the opportunity to portray the Middle Eastern nation as a threat to world peace and, specifically, as a threat to Israel.

The Seijl 2 missile has a range of about 1,200 miles, and thus would be capable of hitting Israel, but Iran’s President Ahmadinejad announced in a speech following what he deemed a successful test that the missile’s purpose was to protect Iran from the threat of aggression.

Still, media accounts in the U.S. and other Western nations portrayed Iran’s test as a threatening provocation and linked it to an Iranian nuclear weapons program there is no evidence actually exists.

But the paper failed to produce a quote of the Iranian president actually specifying Israel as being within range of the missile. Instead, the text of the article only states that Ahmadinejad merely announced that a missile with a range of 1,200 miles had been successfully tested.

The headline claim that the “missile is capable of hitting Israel” is simply a corollary drawn by the Times, but falsely attributed to Ahmadinejad himself in a not atypical demonizing media account.

“I was told that the missile is able to go beyond the atmosphere then come back and hit its target. It works on solid fuel,” Ahmadinejad said in his speech.

“The defense minister told me today that we launched a Sejil-2 missile, which is a two-stage missile and it has reached the intended target.”

He also talked about the insistence of Western countries that Iran end it’s enrichment of uranium for its nuclear program. “They said if you don’t stop, we will adopt resolutions…. They thought we would retreat but that will not happen.”

The U.S. has used its influence in the Security Council to oversee the passage of a series of U.N. resolutions implementing sanctions against Iran for failing to cease enrichment activities. Iran insists that its right to enrich uranium is guaranteed under the nuclear non-proliferation treaty (NPT).

The NPT in fact states that nothing may prejudice the rights of member nations to enrich uranium for nuclear energy.

The U.N. watchdog agency, the International Atomic Energy Agency (IAEA), has continued to verify that Iran has enriched only low-grade uranium, not the highly-enriched uranium necessary to build a nuclear weapon.

“I told them you can adopt 100 sets of sanctions, but nothing will change”, Ahmadinejad said.

In an apparent reference to the Obama administration’s declarations that it would be willing to talk to Iran about its nuclear program, Ahmadinejad said, “All want dialogue with Iran, and we prefer this. But it should be in the framework of justice and respect.”

The lead sentence in the Washington Post‘s account of the missile launch employed a similar device as that used in the London Times‘ headline.

While acknowledging that “arms-control experts debated its significance”, the Post added that the launch demonstrated “an increasing sophistication in its missile program” from a liquid to a solid fuel system. “Solid-fuel rockets can be launched faster and are more mobile,” the Post reported.

The Post quoted Ahmadinejad as saying, “The rocket went into space, returned to Earth and hit its target” to a cheering crowd in a soccer stadium in Semnan province.

The article continued on to say, “Ahmadinejad has long said Iran’s nuclear program has strictly peaceful civilian purposes. But on Wednesday, he linked the missile test with that program, calling it an important scientific achievement and a blow to those trying to thwart Iran’s nuclear ambitions.”

The implication is that Ahmadinejad himself suggested that the missile test was related to Iran’s nuclear program, with the further corollary from that supposed linkage being that the missile is intended to deliver a nuclear warhead.

Having established this ostensible context for its readers, the Post account continued, providing a quote of Ahmaedinjad referencing the nuclear issue.

“‘In the nuclear case, we send them a message: Today the Islamic Republic of Iran is running the show,’ Ahmadinejad said in his speech. ‘We say to the superpowers, “Who of you dare to threaten the Iranian nation? Raise your hand!” But they all stand there with their hands behind their backs.'”

The Post‘s implication was that Ahmadinejad had acknowledged Iranian intentions to produce nuclear weapons, deliverable by a missile such as that tested in Semnan on Wednesday. But a second look at Ahmadinejad’s actual remarks and reconsideration of the context reveals the propaganda device employed by the Post here.

The “link” Ahmadinejad was clearly making between the missile test launch and the nuclear program isn’t that Iran is developing nuclear weapons, but that Iran now has a non-nuclear deterrent to U.S. or Israeli aggression.

Israel has repeatedly threatened to launch military strikes against Iran to destroy its nuclear program. And U.S. President Barack Obama said recently, echoing remarks from his predecessor, President George W. Bush, that a military attack against Iran was “on the table”.

The linkage between the missile launch, therefore, and the nuclear program isn’t nuclear weapons, but the U.S. and Israeli threats to launch attacks to destroy that program.