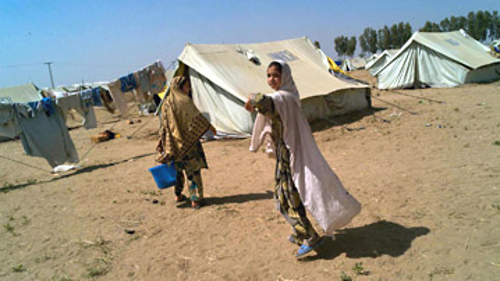 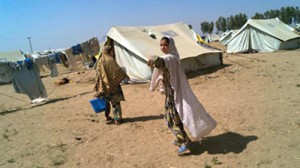 The U.S. has announced $110 million in aid to Pakistan as the number of refugees fleeing the fighting in the country’s Swat district is quickly approaching 1.5 million.

Prior to the ongoing offensive in Swat, Zardari had come under heavy criticism from the U.S. for not doing enough to combat militants.

Earlier this month, the Obama administration’s special representative for Afghanistan and Pakistan Richard Holbrooke said, “Pakistan must demonstrate its commitment to rooting out al-Qaeda and the violent extremists within its borders.”

During his stay, Zardari asked for further funding from the U.S., but U.S. lawmakers argued that future aid should be dependent upon Pakistan’s willingness to engage radical insurgents militarily.

Secretary of State Hillary Clinton accused Zardari’s government of “abdicating to the Taliban” last month after agreeing to a truce with militants allied with the Pakistani Taliban in Swat that would have allowed an autonomous court system under Islamic law to operate in that district.

But in announcing the new aid on Tuesday, Clinton  praised the military action, saying that Pakistan is “leading the fight against extremists that threaten the future of their country and our collective security.”

She said the aid was intended to help relieve the plight of displaced persons.

The aid comes after an emergency $5 million that was announced last week that was “primarily to provide tents, provide shelter and emergency relief supplies, food and medicine to the affected populations”, according to Ian Kelly, a spokesman for the U.S. Agency for International Development (USAID).

The announcement of further aid came as the Office of Antonio Guterres, the United Nations High Commissioner for Refugees (UNHCR), announced that the number of registered refugees since May 2 had reached 1,454,377.

A statement from UNHCR said that “humanitarian workers were struggling to keep up with the size and speed of the displacement”.

Guterres told reporters on Sunday, “It’s like trying to catch something that’s moving ahead of us because the number of people on the move every day is so big and the response is never enough.”

“Leaving this population without the support they need – with such massive numbers – could constitute an enormous destabilizing factor”, he said.

UNHCR’s chief spokesperson, Ron Redmond, said on Tuesday, “We haven’t seen anything so big and so fast in years.”

Of the 1.45 million refugees that have registered, only about 10 percent are living in camps that have been set up for the displaced. Others are living with relatives and friends, in the homes of those who have opened their doors to help alleviate the crisis, or in other locations such as schools that have are being used to accommodate refugees.

Journalists have been barred from entering Swat as the fighting continues, but fleeing refugees have told of increasingly intolerable conditions. Militants have mined roads, and many people who did not flee earlier are not trapped.

The military has closed in on the Swat’s main town of Mingora, a population center of about 200,000, where militants loyal to Mullah Fazlullah have taken over.

Pakistani officials have said that 10,000 residents of Mingora have remained in the city, while most have fled.

Fazlullah is the head of Tehreek-e-Nafaz-e-Shariat-e-Mohammadi (TNSM), a group that has sought to establish Sharia, or Islamic law, in Swat and is allied with Tehrik-e-Taliban Pakistan (TTP), or the Pakistani Taliban.

The Pakistani Taliban is led by Baitullah Mehsud, who was accused of assassinating the former prime minister and late wife of President Zardari, Benazir Bhutto.

The Pakistan military is preparing to engage in urban warfare against militants holed up in Mingora.

A security official said, “Troops continue to close in on Mingora, from where Taliban are trying to escape, but our strategy is not to let them flee.”

Pakistani authorities have said that more than 1,030 militants have been killed, as well as 53 troops. There have been no figures on the number of civilian deaths, or independent confirmation that those killed by security forces were among the belligerents and not innocent bystanders.