Poetic Justice For All Civilians of Burma 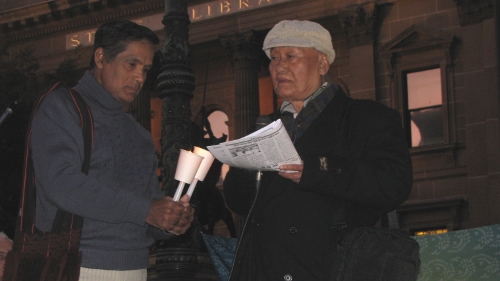 In 1996, Sin Kye, an award winning author and poet from Burma, fled to Australia. The depth of his affection for civilians of all ethnic groups is matched only by his lifetime passion; finding words to convey the passion within the soul of more than 50 million civilians. He conjures up images of his beloved and butchered homeland and summarises them in a manner that produce tears that inevitably follow after sharing a story of hardship. 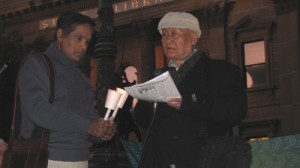 Like so many other people that have fled Burma, he has left behind a life of dissidence and a once bountiful homeland that over the years has been raped, robbed and left to rot by the country’s military junta, the State Peace and Development Council (SPDC). If the 75-year-old poet and author was still a writer located in Burma today, he, like all other writers, poets and journalists, would risk imprisonment. But he has been censored by the Burmese military government before and he knows the current situation experienced by anybody trying to report the truth about Burma.

“In my time, I have witnessed a lot of suffering. I see and feel deep pain in my heart. What we are enduring is unnecessary, irrelevant and preventable,” Sin Kye tells me. Following Cyclone Nargis which struck Burma’s Irrawaddy region in May 2008, he declares that he has lost contact with 100 people, both relatives and friends. They are either dead or missing.

At a recent gathering in Melbourne, Australia, to commemorate all victims of Cyclone Nargis, Sin Kye read out his poetic tribute in Burmese. He brings together survivors and supporters of a free Burma. Sin Kye captured the sorrow of Australians and all people from Burma, regardless of whether the listeners were directly or indirectly affected or not.

One year after Cyclone Nargis killed 140,000 people and left millions missing, injured or homeless, all attempts to cover stories about the one year anniversary were blocked by the SPDC. Consequently, no articles were published in any Burmese-based publication unless it contained positive progress about the miracles being delivered by the SPDC.

Sin Kye is weeping for the land that he was raised in. His delivery of the Burmese language is poignant, reflecting a man who has devoted his lifetime to the field of literature and evoking distraught visual images to non-Burmese speakers.

Sin Kye’s birth home is Wakema, deep in the Irrawaddy Delta’s heartland, and is a member of the Karen ethnic minority. This region bore the brunt of the fury delivered by Cyclone Nargis, destroying rice paddy fields and the lifeline of Burma’s rice supply.

For Burmans and members of the country’s many ethnic minorities, the loss of one innocent civilian triggers unified grief. They know that the SPDC have marked graves for so many individuals who were either swept away or whose fate is still unknown.

As a professional writer, Sin Kye frequently met with other Burmese poets and literary scholars on 33rd Street in the former capital of Rangoon, a place also referred to as Wuthering Heights. He describes this venue as somewhere even the SPDC are afraid to trespass. It may be arguably the only democratic enclave within the whole of Burma, an oasis from the ever-present eye of the military.

Influenced by the late poet Din Moe, Sin Kye says, “When I was a writer in Burma, I initially concentrated on journals but then expanded to cover poems and short stories that focussed on the lives and feelings of civilians, how they view their own existence and the environment around them. I spoke of how farmers toiled the earth when planting crops and how factory workers struggled to make enough to feed their families.”

By his own reckoning, Sin Kye estimates that he has written about 50 poems and 70 short stories on topics that he says ordinary people can relate to, such as the 2004 tsunami and Cyclone Nargis. Sin Kye provides an insight to the thoughts of the cyclone’s voiceless victims who otherwise cannot speak out for fear of reprisal from the SPDC. All of his works have been banned by the military authorities in Burma, but he is ambitious to have everything released in Australia.

Sin Kye is famous for writing Burmese poetry about life in pre-independence Burma. “The old style of writing poetry is more orderly and rhythmic,” Sin Kye explains. “It concentrates on past events in Burma and what the event means in the context of history, whereas new style poetry has language that is free-flowing and expresses the feelings of civilians in Burma. This is a more direct form of communication. The language and emotions speak to the people in a way that I like to write.”

These days, Sin Kye remains very active in writing and releasing poetry. He is currently working on a tribute to jailed opposition leader of the National League for Democracy, Aung San Suu Kyi. “I am preparing to write a poem about the hardships experienced by this inspirational woman,” Sin Kye says. “I am not talking about just the political events, but also the personal experiences that she has endured in the course of her life.”

The British newspaper The Guardian reported on May 14th 2009 that the Nobel Peace Prize winner and two close friends residing in her house were detained by police. Daw Suu Kyi is awaiting her trial in the notorious Insein Prison.

She is due to face charges of breaching the Law Safeguarding the State from the Dangers of Subversive Elements, an allegation she denies. If found guilty, Daw Suu Kyi faces a further five years confinement.

Daw Suu Kyi’s most recent 12 month extension of her five year incarceration would have been due to expire in two weeks.

Her arrest followed the recent capture of John William Yettaw, an American citizen and ex-Vietnam veteran. The British Broadcasting Corporation (BBC) has quoted anonymous members of pro-democracy Burma support groups in Thailand that Yettaw contacted them about writing a book on either human rights or faith-based customs. Yettaw entered Burma on a tourist visa, swam across a lake adjoining Daw Suu Kyi’s residential compound and entered unchecked to spend two days in a guest room without prior knowledge and approval of the Nobel Laureate.

Sin Kye regards Daw Suu Kyi’s predicament as sorrowful, considering every personal tragedy she has been forced to deal with. This includes the death of her British academic husband Michael Aris in 1999, relentless pressure and harassment from the SPDC, her refusal to go into exile in the United Kingdom at the insistence of the military regime, and the mounting toll on her health.

I asked Sin Kye what he believed lay ahead for Daw Aung San Suu Kyi.

“It is very unlikely that the SPDC will let her go. They will hold elections in 2010 without her being allowed to participate, which will be a tragedy of major proportions,” he says bluntly.

The constitution prohibits any Burmese national from participating in elections or serving as head of state if they are or have previously been married to a foreigner.