Obama Administration Statements on Iran Nukes Not Backed by Intelligence 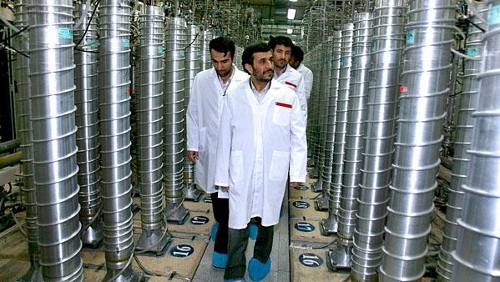 A recent unclassified CIA report to Congress says that it is not known whether Iran is working towards developing a nuclear weapon, despite consistent rhetoric from the Obama administration that Iran is pursuing the bomb.

The report was drafted by the CIA’s Weapons Intelligence, Nonproliferation, and Arms Control Center (WINPAC) and submitted to the Congress by the Deputy Director of National Intelligence for Analysis.

It discusses the acquisition of technology related to weapons of mass destruction (WMD) for the year 2008 and repeats the assessment of a 2007 National Intelligence Estimate (NIE) that Iran “had been working to develop nuclear weapons through at least fall 2003, but that in fall 2003 Iran halted its nuclear weapons design and weaponization activities, and its covert uranium conversion- and enrichment-related activities.”

“We do not know whether Iran currently intends to develop nuclear weapons,” the report states, a tacit acknowledgement that there is little or no evidence that Iran today is pursuing a weapons capability.

Iran “is keeping open the option to develop nuclear weapons by continuing to develop a range of technical capabilities that could be applied to producing nuclear weapons,” the report adds, “if a decision is made to do so.”

The evidence that Iran had previously pursued a weapon capability apparently comes from information retrieved from a laptop computer, referred to in reports of the International Atomic Energy Agency (IAEA) as the “alleged studies”.

The laptop, obtained by U.S. intelligence, allegedly came from an Iranian engineer. The U.S. claims that the information obtained from the computer is evidence that Iran had previously been involved in weapon research and development.

During the buildup to the war on Iraq, the U.S. government claimed that documents showed that Saddam Hussein had attempted to obtain uranium in order to make a nuclear bomb, but the documents proved to have been fabricated.

In that case, the U.S. was reluctant to hand over the documents to the IAEA, but once the agency finally obtained them after repeated requests, it immediately recognized them as fakes.

In the case of Iran, the IAEA has so far declined to take a position on whether the documents are authentic or not, but is taking the matter seriously. The “alleged studies” remain the principle outstanding issue preventing the IAEA from being able to conclude with reasonable confidence that Iran’s nuclear program is not intended for any military purpose.

A staff report to the Senate Committee on Foreign Relations earlier this month similarly framed Iran’s nuclear program as a potential threat, but at the same time acknowledged that “There is no sign that Iran’s leaders have ordered up a bomb.”

The report also noted that the Director General of the IAEA, Mohammed El Baradei, has “resisted pressure from the United States” to “declare Iran in violation of the NPT [nuclear non-proliferation treaty] because, he said repeatedly, the IAEA had no proof of a military program.”

It also claimed that “Publicly available U.S. intelligence reports and published reports show that Iran had been running a military nuclear program” until 2003. But the 2007 NIE and other publicly available information do not show this as a certainty. The 2007 offers its assessment that this was the case, but it’s unclear what actual evidence the intelligence community had upon which it based this assessment.

Prior to the invasion of Iraq, the intelligence community had repeatedly issued reports assessing that the country possessed WMD, but was never able to offer any credible evidence to support that claim. The CIA later admitted that Iraq’s WMD programs had been dismantled by the U.N. and all declared proscribed materials destroyed, and that Iraq unilaterally destroyed its remaining stocks of undeclared WMD in 1991.

Both the CIA and Foreign Relations Committee reports were obtained by Steven Aftergood of the Federation of American Scientists and posted on his blog, Secrecy News.

President Barack Obama and other members of his administration, contrary to the acknowledgment that there is no evidence Iran today has a nuclear weapons program, have repeatedly made statements suggesting that Iran is actively pursuing the bomb and has based its policy on that assumption.

“Iran’s development of a nuclear weapon I believe is unacceptable. We have to mount an international effort to prevent that from happening,” Obama said in his first press conference as the president-elect.

At a speech in Prague, Czech Republic, in April, Obama said, “So let me be clear: Iran’s nuclear and ballistic missile activity poses a real threat, not just to the United States, but to Iran’s neighbors and our allies.”

Vice President Joe Biden gave a speech in Munich, Germany, in which he said that Iran’s “illicit nuclear program” was “not conducive to peace”, and in a speech to the American Israel Public Affairs Committee (AIPAC) earlier this month, he said that the possibility of a “nuclear armed Iran” was “an existential threat.”

Secretary of State Hillary Clinton said last month, “We know the imperative of preventing Iran from obtaining nuclear weapons” and characterized its nuclear program as “the threat posed by Iran”.

In an interview with ABC News on March 3, Clinton said, “Iran’s pursuit of the nuclear weapon is deeply troubling to not only the U.S. but many people throughout the world.”