Pakistan: Half a Million Refugees as Fighting Continues in Swat 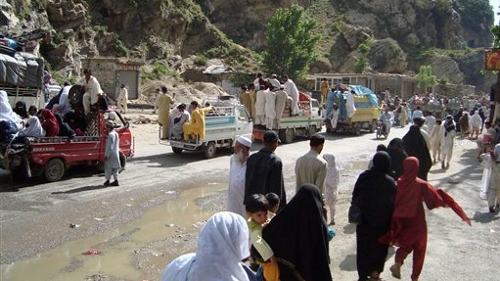 Pakistani military officials have said that the number of civilians who have fled fighting in Pakistan has reached 1.3 million. A figure of more than half a million who have been registered has been confirmed by the U.N.

The Office of the United Nations High Commissioner for Refugees (UNHCR) announced on Tuesday that the number of people registered as refugees as a result of Pakistan’s ongoing conflict against militants had surpassed 500,000.

Most of the registered refugees have found temporary homes among family and friends, or with others who have offered to help accommodate those who have fled the fighting. More than 70,000 others are staying at displaced person camps that have been set up in an effort to help mitigate the humanitarian crisis.

The Pakistan military began waging offensive operations against militants in the Swat district last week just prior to a trip by President Asif Ali Zardari to Washington, D.C. to meet with U.S. President Barack Obama and Afghan President Hamid Karzai.

The Swat Valley, located in Pakistan’s North-West Frontier Province (NWFP)region, in recent years has been taken over by militants, but was previously a popular tourist destination sometimes referred to as the “Switzerland of Pakistan” for its mountain scenery.

The Pakistan military operation is largely targeted against the forces of Maulana Fazlullah, the head of Tehreek-e-Nafaz-e-Shariat-e-Mohammadi (TNSM), who took over the group’s leadership from his father-in-law and the group’s founder, Maulana Sufi Muhammad.

Fazlullah’s forces, allied with Tehrik-e-Taliban Pakistan (TTP), or Pakistan Taliban, led by Baitullah Mehsud, have terrorized Swat, enforcing harsh rule considered by many Swat residents to be un-Islamic, such as burning schools and beheading police officers.

Sources told the Daily Telegraph that a second offensive is being planned to combat militants in the Waziristan regions of the Federally Administered Tribal Areas (FATA).

Baitullah Mehsud has his stronghold in South Waziristan, and according to the U.S. State Department is a “key al-Qaeda facilitator”. The U.S. has also accused him of the assassination of one time Prime Minister Benazir Bhutto, the late wife of the current president, Mr. Zardari.

Also this week, a U.S. missile attack by a drone aircraft killed 15 people in the village of Sra Khawra on the border of North and South Waziristan.

U.S. officials told the Los Angeles Times that drone attacks are now being carried out under a new arrangement with the government of Pakistan “that for the first time gives Pakistani officers significant control over routes, targets and decisions to fire weapons”.

Drone attacks have been the cause of a bitter controversy as the U.S. insists on continuing them while the Pakistani government has repeatedly objected to their use and has decried the U.S. actions as a violation of their sovereignty.

The drone attacks have mostly been CIA operations, but under the new agreement, the Department of Defense will operate a separate fleet of drones and allow Pakistani military officials direction over their use within Pakistan.

The CIA has reportedly carried out at least 55 drone attacks in Pakistan since August.

The Pakistan army’s chief spokesman, Maj. Gen. Athar Abbas, said that 751 militants have been killed so far in the ongoing operation, and 29 security force members. He said he had no specific information about civilian casualties, but that the government was “taking all possible measures to avoid collateral damage”.

As the fighting continues, independent observers have expressed concern over the dangers to civilians.

“Our view is that the Pakistani military’s previous record of counter-terrorism operations does not inspire confidence in its ability to safeguard civilian life,” Ali Dayan Hasan of Human Rights Watch said. “We would ask the military and its patrons – particularly in the U.S. – to urge the utmost care in regard to civilians.”

The U.S. said it would provide $5 million to assist with the humanitarian situation. Ian Kelly, a spokesman for the U.S. Agency for International Development (USAID), said “This is primarily to provide tents, provide shelter and emergency relief supplies, food and medicine to the affected populations.”

Meanwhile, a bill to provide Pakistan with billions in military and economic assistance is being debated in Congress. Senator Bob Corker said at a Senate Foreign Relations Committee hearing on Tuesday that the vote should be delayed. “We are going to be engaged there for many, many, many years,” he said. “Many men and women will lose their lives. We’re doubling down, and we haven’t debated this yet.”

The Obama administration has come under criticism for not having a clear strategy in Afghanistan and Pakistan.

Senator Jim Risch said at the hearing, “It is just breathtaking the amount of money, the American lives we’ve spent there, and you have a government that has control maybe to the outskirts of the capital. I’d love to see an endgame, but I don’t know who’s smart enough to – to develop and endgame for us in that country. It’s very depressing.”

Senator Russell Feingold expressed concern that Obama’s plan to increase the number of troops in Afghanistan might force militants into Pakistan and “could end up creating a pressure in Pakistan, which would add to the instability.”

Graham E. Fuller, a former CIA station chief in Kabul, Afghanistan, and author of The Future of Political Islam, wrote in an op-ed earlier this week arguing that military force is not the solution. The occupation creates hatred and military force has only made matters worse.

“Indeed, one can debate whether it might have been possible – with sustained pressure from Pakistan, Iran, Saudi Arabia and almost all other Muslim countries that viewed the Taliban as primitives – to force the Taliban to yield up al-Qaeda over time without war,” he wrote, referring to a Taliban offer to hand over Osama bin Laden, accused of masterminding the terrorist attacks of September 11, 2001, if the U.S. provided evidence of his guilt.