Afghanistan’s security should be in its own hands: Ruprecht Polenz 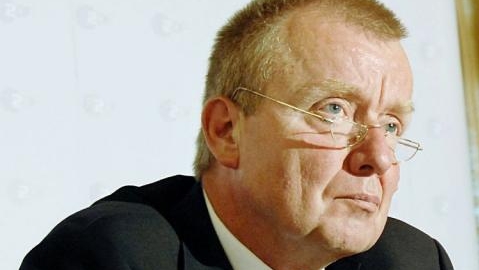 Although the level of bilateral ties between Iran and E.U. members have undergone a sharp decline due to the controversy over the country’s nuclear program, Germany is still among the top three trade partners with the Islamic Republic.

Traditionally, Germany has been a close E.U. ally of Iran that has tended to preserve its political association and diplomatic conciliation with the country, even in the face of nuclear controversy, so as to safeguard its widespread financial interests all around the oil-rich Persian Gulf nation.

According to the German Foreign Ministry, the entire value of goods imported from Iran in 2008 floated around €577.8 million which indicates a prominent €115 million rise in compare with 2005 when the hard-hitting anti-Iranian sanctions had not been passed yet.

However, the political atmosphere of bilateral relations saw a dramatic deterioration over the past 4 years and the only high-level meeting between the officials of two countries took place when the Iranian Minister of Foreign Affairs Manouchehr Mottaki sat face-to-face with his Deutsch counterpart Frank Walter-Steinmeier in 2006 in Berlin.

In the recent weeks, however, a delegation of Iranian lawmakers and MPs went on a brief trip to Germany so as to hold talks with the Deutsch Bundesinnenminister (Interior Minister) Wolfgang Schaeuble and the influential Chairman of Foreign Affairs Committee of the German Parliament Ruprecht Polenz.

In an exclusive interview with the Foreign Policy Journal, Ruprecht Polenz talked to me on the prospect of Iran-Germany relations, the common grounds of cooperation and the main rifts which is holding the two partners apart from each other.

“During the course of the visit, we met the Iranian delegation on three occasions for very intensive discussions,” said Polenz on the details of his March 5 meeting with Alaeddin Borujerdi, the Chairman for the Committee for Foreign Policy and National Security of the Iranian Parliament.

Polenz admits the existence of traditionally peaceful ties with Iran. “Germany has traditionally maintained good relations with Iran,” he says. “In the EU 3 + 3 negotiations, though, we are not participating as mediators, but rather as part of the international community of states, which has made far-reaching proposals to Iran on cooperation and, in return, expects objective guarantees that the Iranian nuclear program will remain peaceful in the long term.”

Nevertheless, Germany seems to share the standard on Iran’s nuclear issue that includes the demand for the suspension of uranium enrichment as a precondition to entering multilateral ties.

Answering the question of whether the stance of Germany on Iran’s nuclear issue is impartial enough while the ongoing Israel’s nuclear expansions and ambitions are left unanswered, Polenz states, “Germany is one of those countries which decided against having nuclear weapons. We would like to see a strengthening of the non-proliferation regime.”

He meanwhile reveals the very core of what the EU, G5+1 and U.S. are looking for: the prevention of a new atomic power from emerging when there is no particular leverage to disarm already developed arsenals. “At the same time, progress should be achieved in preventing proliferation of nuclear weapons amongst states which are not yet nuclear powers,” he reiterates, “and this might include, for example, strengthening the monitoring powers of the International Atomic Energy Agency, making it more difficult to withdraw from the Non-Proliferation Treaty and abandon the non-proliferation regime and, above all, the commitment to only carry out uranium enrichment in future in a multinational framework, subject to strict supervision by the International Atomic Energy Agency.”

Polenz, who is the member of Christian Democratic Union (CDU) political party, sees a positive signal in the New Year greeting message of President Obama to Iran: “President Obama’s New Year message to the Iranian people and leadership, with his open offer of a ‘new beginning’ has been basically well received by the Iranian leadership.”

He adds, “The Americans have also included Iran in the list of states invited to the ministerial-level Afghanistan neighborhood conference at the end of March in The Hague.”

The Deputy CDU Minister also stresses the necessity of tackling a major regional concern of Iran; Afghanistan’s drug crises. “Some progress has been made in the fight against drug cultivation in Afghanistan,” he says. “In many Afghan provinces, opium poppy cultivation no longer takes place; nevertheless, this problem remains one of the most difficult.”

“A successful anti-narcotics policy must comprise several elements: alternative income-generating opportunities for poppy farmers, effective measures to prevent the cultivation of opium poppies, measures to combat corruption amongst local officials and police officers, better monitoring of transit routes, rigorous action against processing facilities and, not least, prevention of consumption in the countries of destination,” he stresses.

Seemingly, Iran and Germany are at least slightly in consensus over the prospect of Afghanistan’s security, which can be a good pretext to bring Iran and western powers to a same table. “The goal of the international efforts to assist Afghanistan is to enable the country to take on responsibility for its own security in the future”, he explains. “In other words, Afghanistan must be able to guarantee the security of its own citizens and ensure that no threat to the region or the international community are generated on its territory, as was the case in the 1990s, when Al-Qaeda planned and carried out attacks across the world from Afghanistan.”

“The idea is for a regional political approach to get Afghanistan’s neighbours more strongly involved in this process than previously, something which is also in the interest of all neighbouring states,” Polenz says, suggesting a goal that is precisely what the Iranian administration has long sought.

According to the German MP, the international community is involved in “numerous development-assistance projects to enhance the Afghan education and health system”, as well as infrastructure projects to build streets and provide water and electricity supplies.