A starling taught to speak 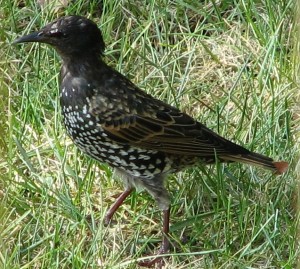 While sitting in my kitchen the other day, I heard a beautiful and astonishingly complex bird call. Tiptoeing over to the window, I spied a European Starling perched on my sill-its throat vibrating as it sang its tiny heart out.

After pigeons and sparrows, starlings seem to be the most common birds in New York City but I know so little about them. I remedied that with some quick Web surfing and learned that the song I heard is a combination of “warbling, gurgling, chirruping and clicking noises,” and these birds will often imitate many other species (animals as well as birds), along with man-made sounds like car alarms and telephones. A group of starlings is known as a “constellation” or a “filth” or a “murmuration” or a “scourge” or a “vulgarity.” Whatever term you may use, starling flocks often number in the tens of thousands.

I also learned that every European Starling in North America “descended from 100 birds released in New York’s Central Park in the early 1890s. A group dedicated to introducing America to all the birds mentioned in Shakespeare’s works set the birds free.” Thanks to this dimwitted idea, you can now find over 200 million European Starlings across much of North America.

Finally, I learned that the US Department of Agriculture has named the European Starling an invasive species because it “competes with native species and destroys crops.” Also, critics say, large flocks can “overwhelm buildings and trees with a large scale buildup of feces where the uric acid content causes corrosion to stone, metal, and masonry. Gutters and down pipes clogged with starling nests often become blocked, leading to water damage. Bacteria, fungus, and parasites in the feces pose a health risk.”

I don’t know about you, but I’d rather live in a world where…

a)      A resilient mimic of a bird is valued above stone, metal, and masonry