Eric Margolis on Iran and the Media 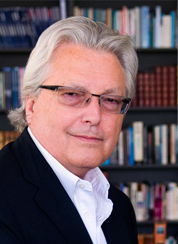 In the tumultuous era of bribery and conspiracy, where the majority of political equations in the east and west are based on depraved arrangements, journalists must be practically artists and craftsmen to remain independent and out of harm’s way.

The pandemic dominance of certain lobbies over the mass communication media which are meant to be the passageway of veracious, reliable and undistorted information to the public makes it harder to be non-aligned and unbiased; however, Eric Margolis is among those journalists who have long braced themselves for the enormous costs of impartiality: “Trying to write balanced commentary on the Mideast has seriously hurt my media career and lead me to be banned from important publications and TV networks for whom I once wrote. I face constant threats and calls for me being fired from my newspaper chain, Sun National Media.”

Margolis admits the existence of such a complicated dominance “Religious conservatives and pro-Israel groups have very strong influence over the US media. Write a bad article calling Iranians nasty things and you may get one letter from an angry Iranian; Dare criticize Israel and you and your newspaper will get hundreds.”

The suggestion of an interview with the internationally syndicated journalist and media correspondent Eric Margolis was first made by a fellow journalist from Pakistan, Gul Jammas Husain of Tehran Times. He stirred me to engage in a conversation with Margolis, whose articles have appeared in the New York Times, the International Herald Tribune, the Times of London, the Los Angeles Times and a number of other publications worldwide.

Having Margolis for an exclusive interview with Foreign Policy Journal was a precious opportunity to elaborate on the beliefs and notions of this veteran journalist whose recent article “Iran and the West: a History of Violence” caused a broad dialogue among readers, politicians and media personalities.

“I have always refused to give in to threats or bribery, and value my honor and honesty far more than media standing.  I try to present a fair view about Iran because I hate propaganda, lies and historical untruths.” He alluded to the hurdles he was grappling with over his independent stance on Iran.

On the overtures between Iran and the U.S. towards a new era of normalization and the reestablishment of bilateral ties, he challenges the recent demand of the Iranian President for an apology from the U.S. for the mistreatment of American governments against Iran during the past 3 decades: “Iran will never get a full apology from the US president. It’s inconceivable.” He adds, “Asking for one is bad diplomacy and unwise. Rather than apologies, Iran should seek positive statements and some understanding of its past suffering.”

However, Eric Margolis apprehends that the extremism of conservatives in both sides may thwart an improved atmosphere: “It will be almost impossible to break the U.S. hardliner’s hold on Mideast policy …. But Iran should still offer the hand of friendship to the U.S., end the hot language, but not be seen to come crawling.”

Maybe President Ahmadinejad is right, as Iran has long suffered from the sanctions, political intervention, hostile rhetoric and underground movements of America, particularly during his own tenure; however many of the Americans themselves still consider Iran to be a part of the so-called “Axis of Evil”, an epithet which former President Bush had used to confront the famous catchphrase of “Great Satan” used by the Iranians ever since the anti-U.S. revolution of 1979.

On the “innovative” masterpiece of the former U.S. President, Margolis believes: “I think the “Axis of Evil” is out of date. For now, we don’t hear any similar silly slogans inWashington, but they could come back.”

Margolis commented on mistakes from both sides: “There is still great hostility to Iran. Similarly, Iran makes a mistake by keeping up the ‘Death to America’ business.  This merely convinces American TV viewers that Iranians are dangerous fanatics who want to destroy the US and are led by mad mullahs, playing right into the hands of western propaganda.”

As the screens of American TVs were already loaded with the scenes of frequent anti-American demonstrations in Iran, the emergence of nuclear standoff has fed them with a subject that could be adequate to nourish the neoconservative outlets for the rest of history: “There is no moral justification for the West’s double standard over [Iran’s] nuclear issues. In fact, the U.S. and other original NNPT members are in violation of the treaty because they never junked their own nuclear arsenals.”

“Pure hypocrisy,” Margolis protests. “If India has the right to nuclear arms, and now long-range missiles, so does Iran.”

Margolis consequently states “I am currently the target of a hate campaign but, as I note in my new book, American Raj, the Muslim world with its usual lousy public relations, has only itself to blame for not properly getting its message to Americans. Why didn’t some Iranians buy American newspapers or TV?”

On his controversial journey to Iran last week, the President of the Academy of Motion Pictures Arts and Sciences (AMPAS) Sid Ganis publicly expressed his astonishment over the prevalent interest and trust of Iranian people in the American media outlets.

The U.S. is reportedly inviting Iran to the security summit on Afghanistan. “Does the U.S. really need the help of Iran to solve the security complexities of Afghanistan, or is the invitation just a political gesture; a furtive offer to the commencement of direct talks?” I asked Eric.

“Both. [It’s] to ease the way to more productive relations and to see if Iran will help the US in Afghanistan.” He went on, “perhaps Washington will even ask for Iranian troops. One hopes Iran will be too wise to get drawn into Afghanistan.”

Eric Margolis is thoroughly familiar with the Middle East and its environment. He has been in Kashmir, Afghanistan, India and Pakistan to cover the wars and conflicts. He is also well-acquainted with the media trends in his own country and believes in the transition of tendency from the mainstream media toward the alternative outlets: “Many younger Americans are getting their news from the internet.  This is a major change, but the networks and big daily newspapers still dominate the news and they reflect the establishment.” He concludes, “One reason the internet became so popular is that many younger people say they were lied to by the media over the Iraq War.”