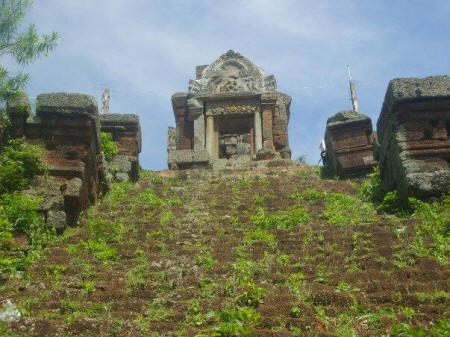 One of the least talked about topics in rural Cambodia in the company of strangers is politics. An exception to this rule is when the discussion focuses on history and whether Cambodia’s sovereignty is threatened by a traditional neighboring enemy, Vietnam or Thailand. This is where everybody has an opinion deemed worthy of declaring in public, and even the figures least likely to speak out become vocal.

In Cambodia, monks are afforded a level of respect that most publicly elected officials with all of the relative power and wealth at their disposal can only dream of. It is not uncommon for males of elementary school age to commence a period of time as a novice monk, learning the importance of discipline in daily life, before deciding whether to devote a portion of their adulthood adhering to Buddhist teachings; or in some cases, cultivating the inner political cynic within. 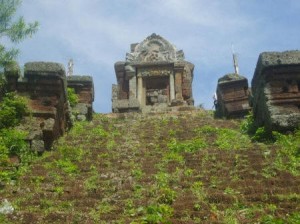 A popular ground for young monks to congregate is Phnom Chisor in Sla village, 30 minutes from the town of Takeo. It contains an ancient Khmer temple built in the 11th century by the Khmer king Suryavarman I, which overlooks all surrounding villages. At the base of the mountain, one monk slowly approached me, hoping to engage in a conversation. He looked about 20 years of age and wore robes covered in dirt and dust. The local police chief passing by on his motorbike slowed to literally a crawl and lowered his gold-rimmed sunglasses, feigning some interest in the ensuing dialogue, before speeding off.

The monk, who later introduced himself as Soporm, asked me if I was interested in climbing the numerous steps to the summit, which I declined by saying that I was waiting for a moto. He then proceeded to give me something of a short history of the temple and the mountain’s importance in the region. Locals say that it is older than Angkor Wat, Cambodia’s symbol of pride that appears on the national flag. However, Phnom Chisor is in the shadows of its globally famous counterpart, and is not mentioned in the news as often as Preah Vihear, the temple on Cambodia’s northern borders that is the subject of a border dispute with Thailand.

In between several nervous smiles, I asked, “How long have you been a monk?”

“Since I was 18 years old. I am 21 now. I still have the same robes,” he replied as he directed my eyes to the fraying edges dragging along the dusty road. “I have never had enough money to buy more clothes. My family is very poor and lives in Pursat. I live inside a monastery on the main road.”

I quizzed him as to how often he visited Phnom Chisor.

“Only on special occasions such as Pchum Ben (Ancestors Day, when Cambodians pay respects to the ghosts of their deceased relatives by throwing rice near the temples and offering cooked meals to monks). Some monks come here every day, but I am too lazy,” he replied.

With a grin, I added “I cannot imagine any monk being lazy. You are up daily before the sun rises to commence your chores and chanting.”

Soporm went on, adding, “Other men, including my friends the same age as me, have the good life with their friends, going to Phnom Penh, attending university. Their parents did not pressure them to enter the monastery. I want this free lifestyle too, but my family thinks that being a monk is more important because to them, I will live a cleaner life.”

Like every young man, he wanted to explore life, and seeing the relative freedom that I possessed in being able to travel to Cambodia probably only fuelled his ambitions. Was becoming a monk a step in the natural progression towards manhood in Cambodia, or was this more of an appeasement for elders?

“Is this something that you really want to do?” I asked.

Soporm shook his head. “No. I have other dreams.” He went on further and outlined his vision. “I want to be a politician when I am older.”

Never had I encountered anybody who openly talked about politics, let alone declare their willingness to enter this profession. It was even more remarkable coming from a monk, the same person whom even public officials such as politicians and mayors were keen to remain onside with, for the sake of gaining the support of residents.

Surprised by his forthright declaration, I asked, “Why do you want to enter politics?”

“Because people would then have to come begging to me.”

“But they already do. With this robe, you are granted more respect than most people in this country,” I interrupted.

“Maybe, but I cannot cash in that respect and get some money for myself and do much more with my life. If I were a politician, I would not have to beg for money, food or clothing. It would be much easier to ask for things without having to justify my reasons. You look like you have never been poor, David, so maybe it is difficult for you to understand.”

With the closure of the previous sentence, he had me cornered, but I did not give up hope. “Then you would have to make a choice between sticking with principles or being more interested in personal gain,” I added.

“Yes, I know it would be difficult,” Soporm began to say. “But there are monks my age that have tattoos on their bodies and smoke cigarettes.”

The last thing I would have wanted is sow the seeds of frustration. Turning attention to the election due to be held in the same month (July 2008), I asked Soporm, “What do you think of the battle between Cambodia and Thailand over the Preah Vihear Temple?”

“There is no issue over Preah Vihear. The people that run this country make it an issue because they do not want people to blame them for so much poverty. Sometimes the government forgets that there are Cambodians that live outside of Phnom Penh,” declared Soporm.

This attitude was in stark contrast with the vast majority of young men I had encountered in my time in Tropang Sdok village. Upon my departure in late 2008, I recall that English teachers and students that I came into contact with regularly spoke openly of their happiness for Cambodia to go to war against Thailand and prove its ground forces superiority, as well as reinforce rightful ownership of Preah Vihear Temple.  Whether they would volunteer to go to onto the frontline themselves is something I never discovered, because conversation would then suddenly shift towards safer topics or change to Khmer language, freezing me out of the conversational loop altogether. But it seems that I had encountered an individual not afraid to speak his mind.

“So do you think Prime Minister Hun Sen is hiding other problems?”

“Yes, of course,” Soporm shot back. “If you think Phnom Penh has many poor people living on the streets, you go to the countryside and see how many beggars ask for help.” He then pulled out a mobile phone and showed me a minute of video footage depicting an old woman talking in a raspy voice. “Yesterday this lady came crying to me because she had not eaten in 3 days. Her husband died last year but she goes out to the fields every day to plant rice. She has no money to buy rice because her son takes the money that should be used for food and buys wine for himself.”

“I gave her some of my rice that I had collected back at the monastery,” continued Soporm. “No politician will feed her because they do not want to know of her existence. She is a survivor, but not a soldier. I do not understand why ex-Khmer Rouge members who are responsible for so many deaths in the past can suddenly become heroes if they say they are prepared to fight and die for Cambodia by defending Preah Vihear.”

With a hopeful smile, I added, “This lady can vote for another party this election. Cambodia is a democracy, isn’t it?”

Judging by Soporm’s reaction, I must have sounded ridiculous because he chuckled and stated, “No we are not. This is still a dictatorship. Many parties are just to show countries like yours that we can have elections too.” With a sigh signifying defeat, he concluded, “Maybe we should have only one party. People here already know who will win.”

Hearing stories like this is what cut deeply into my soul while living in Cambodia. Multiple numbers of four wheel drives with logos representing international aid agencies and electoral observers from the European Union frequently travelled on the national road connecting Phnom Penh and the town of Takeo. Countless numbers of open trucks representing numerous political movements used their megaphones to court residents with mottos and promises, and hand out leaflets. How many of them stopped to listen to experiences like Soporm was exposing me to? How many of these officials actually knew of such conditions that residents endured? And what was the extent of my responsibility now that I had spoken with somebody who in public remains impartial, yet was secretly telling me about his own political aspirations?

Suddenly he turned and felt the sleeve of my shirt with his thumb and forefinger. My initial thought was that I should give him the shirt off my back.

“David,” he began, “Please help me. I need money for clothes.”

At that moment, my eyes darted around in earnest, desperately looking for signs of a passing moto driver and an excuse to leave the scene at this awkward moment.

“U.S. dollars are okay for me,” responded Soporm.

And here was my moral dilemma. Without the US dollars, I had no way of travelling to Phnom Penh. I glanced over to the coconut vendor across the road, but even though he probably had local currency, he would need to sell 40 coconuts to obtain 80,000 riel just for me to get some change. Giving the monk the solitary 1,000 riel note would seem like an insult considering how much he had shared with me. I may as well give him nothing and be prepared to accept any bad karma as just desserts, I thought.

And that is exactly what I did.

“I’m sorry, but I have only enough to get me to reach Phnom Penh.” It was obvious that I was lying severely to protect my own interests and I could tell that the monk could see right through my intentions. However, he chose to smile and say that it was alright.

After excusing ourselves by saying that we had other destinations to reach, my sojourn with the young monk ended meekly. This is only appropriate considering the scant amount of attention I paid to a simple request. Indeed Soporm was right; I do not know what it is like to be poor, and like so many, I ignored the plight of one in need and demonstrated how much extra study I still needed to master the art of respect.