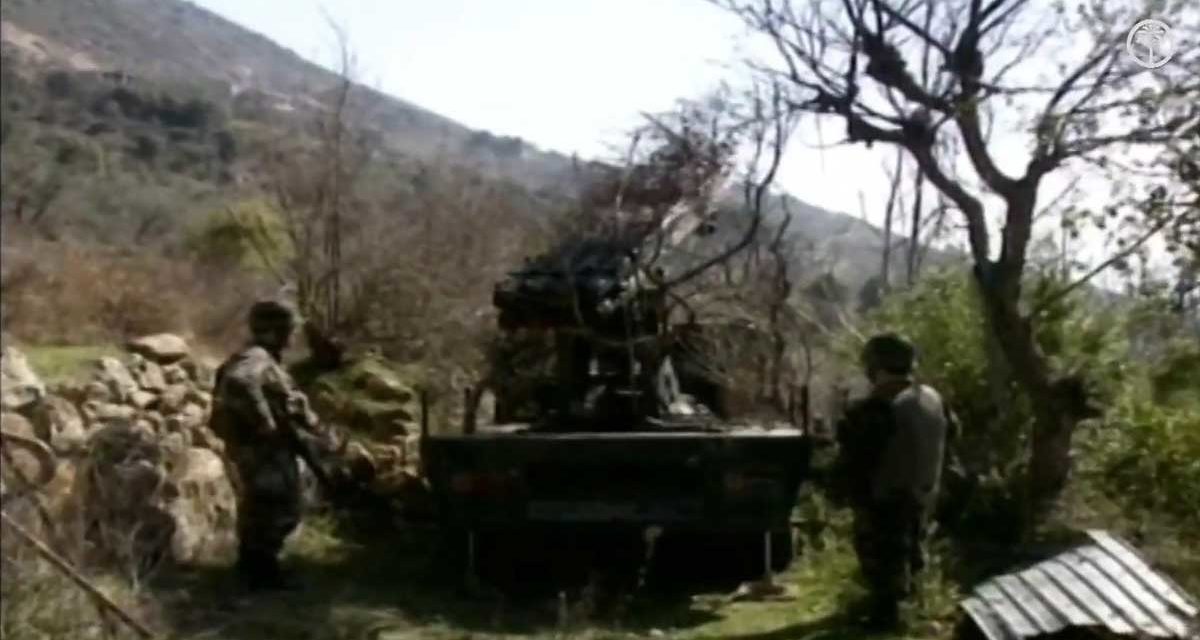 Hezbollah fighters standing by a Katyusha rocket launcher (CC BY 3.0)

If you love your money, then it’s wise not to bet on any notion that an exploding Israeli drone slap-bang in the heart of Lebanese Hezbollah’s southern Beirut stronghold in late August will turn out to be the starting point for a bigger round of conflict between the two antagonists.

Neither for the matter should the Islamic movement’s response: the firing of at least two guided Kornet anti-tank missiles at an Israeli military vehicle beyond the occupied Shebaa farms area into the settlement of Avivim and whose true fate—despite Israeli comments to the contrary—remains unknown.

And no, it has nothing to do with on-going political and economic protests that have rocked Lebanon and its government over the course of the last week.

Rather, even in openly striking Beirut for the first time in 13 years against an enemy its long castigated for being a dyed-in-the-wool terrorist organisation doing its legwork as a proxy for the Islamic Republic of Iran, Israel never intended for the tectonic plates of deterrence between them to suddenly grind against each and collapse.

The reason for this stems from a dawning realization that Hezbollah has steadily been tweaking the toppings of its already vast missile arsenal with precision-guided components that would make their impact and choice of target a truly calamitous treat for the Israeli home front in the event of another war.

Ever since Hezbollah first began utilizing missiles against Israel dating back to the early 1990’s as a mechanism to deter Israeli attacks on Lebanese civilians according it its leader, it has primarily relied upon crude Katyusha rocket variants and something repeated during major flareups in 1993, 1996 and the all-out war of 2006.

These short-range Katyushas are by any definition mediocre projectiles with low range and explosive charges that follow a predictable ballistic arc not only making them inaccurate and indiscriminate, but also increasingly susceptible to Israel’s advanced missile interceptors.

However, purely in military terms, they seemed to have fulfilled their purpose of eventually forcing Israel to refrain from strafing Lebanese civilians in their towns and villages as a means of retaliatory deterrence.

But then most likely owing to a premonition in the post-2006 period that Israel’s intolerance for a Sword of Damocles constantly hanging over her head in the form of its growing missile arsenal might trigger protracted military action, Hezbollah decided to try and nip any Israeli calculation in the bud.

The plan was to somewhat level the playing field through the acquisition of precision-guided missiles which unlike the Katyushas, are designed with increasing lethality to hit pre-determined targets with the accuracy of a few meters whilst minimizing collateral damage.

In being able to hit its most sensitive sites at will, the hope was that it would be sufficient to deter any military endeavor on the part of its strategic anathema which even if relatively successful, would curtail what it views as its enduring mission of ‘resistance’ in the region.

These guided munitions are by no means designed to achieve a sense of missile parity with the state of Israel who would still dwarf them in every conceivable aspect of military and security hardware.

But unlike the Katyushas, the flight path of a precision-guided missile alters in-flight as it homes in on its target and thereby makes calculating a ballistic arc incredibly difficult.

In theory, the likes of Israel’s much publicized David’s Sling and Arrow missile interception systems coupled with up-to-date GPS jammers and the like should be able to take out these precision missiles.

However, by throwing a few dozen Katyushas into the mix in addition to swarming those interceptors with the precision-guided variants, it’s calculated that by then the weary, fatigued and uncertain systems would make big mistakes even on fine margins and thereby offer no serious defense.

Despite unarguably being the most powerful military force in the Middle East and one that always had a knack for reducing the Arab world’s military machines to something akin to an abattoir, non-state Hezbollah remains the only force in the Arab world against whom mighty Israel remains far from cocksure.

It is a force from which the Jewish state feels a red mist of exsanguination slowly descending upon it, circling the noose around its neck and hoping to bleed it in the long run as part of wider plans it believes are directed from its Iranian benefactors.

For all its wealth and military prowess, Israel remains increasingly vulnerable to the mercy of Hezbollah’s precision-missiles.

After all, it’s a tiny state with an area combining just over eight thousand square miles, 263 miles in length and a width that ranges from 71 to 9.3 miles at its narrowest point—that too surrounded on almost all sides by hostile neighbors.

Its critical infrastructure as well as ports from where more than 99 percent of its trade is handled doesn’t offer it much leverage especially when up against a determined force showering it with deadly missiles, and more so one that isn’t subject to the writ of its host state.

A state of paralysis created through the infliction of enormous damage on its home front is not a scenario its military and political echelons can afford to fathom through the wreaking of a constant blitzkrieg on their even tinier Lebanese neighbor.

Ultimately, it’s the hunch about this that ensures any attempt at altering the rules of engagement with its Lebanese nemesis even when the boundaries are pushed, return more or less to their original limits.