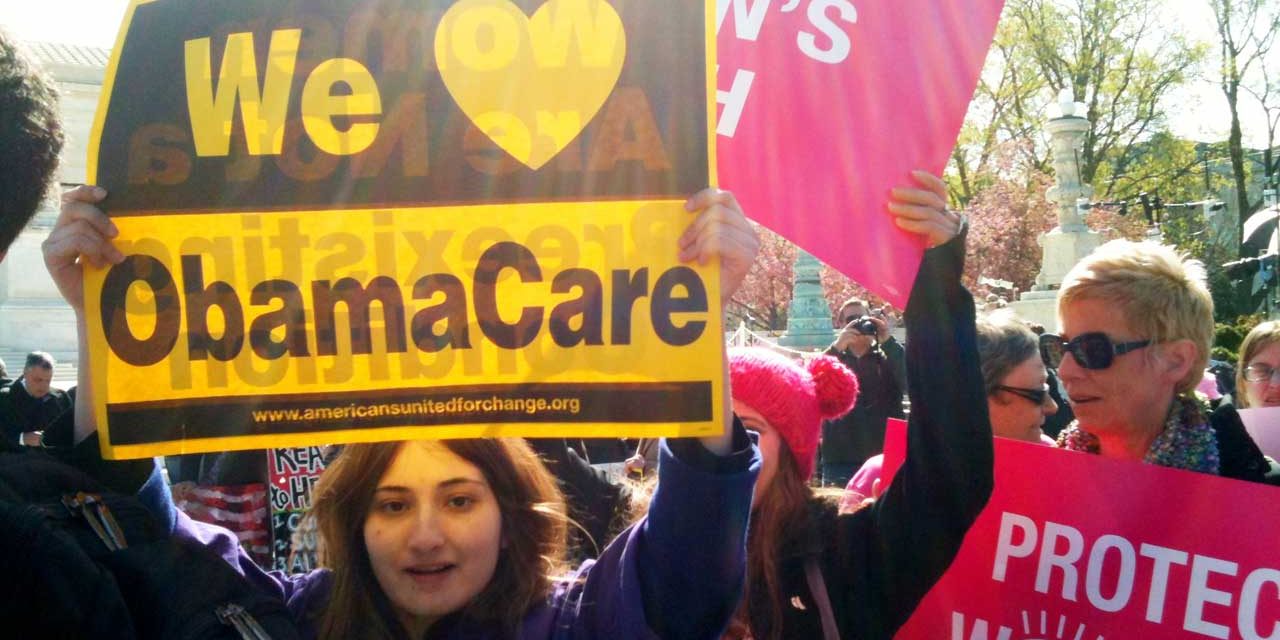 Rally in support of the Affordable Care Act in front of the US Supreme Court in Washington DC, March 27, 2002 (LaDawna Howard/CC BY 2.0)

“Free” is America’s new verbal Potemkin village of health care, where Susie gets a free birth if she survives her abortion, free medical care for life, and even free food. All Susie has to do for herself is breathe.

For the next one and a half years we will have to endure the hyperbole, apocalyptic predictions, fake outrage, half-truths, and frank lies of politicians. Some kind soul should take pity on us and pass out beans to put in our ears.

Of course, we should expose ourselves to many opinions, but we have to be careful about propaganda. Propaganda, an ugly word, is viewed as more than mere opinion but information that is somehow manipulative, misleading, or not telling the whole truth.

Propaganda came to mind during a meeting I attended where well-heeled teenage girls sporting AOC for Congress T-shirts preached to the captive audience about how the government should pay for college tuition, books, and housing for everyone, while extolling the virtues of socialism. Had their parents heeded Vladimir Lenin’s “Give me four years to teach the children and the seed I have sown will never be uprooted”? Then some adults with vapid smiles admonished us that we should believe the young ladies, not because they provided statistics or pros and cons of the value of college for everyone, but because they are young and our future. This brings out one propaganda tool: it’s for the children.

Why would we willingly give up any of our freedoms and turn over our pocketbooks to the government because some nouveau socialists fed us propaganda? Because it works.

Look at the Social Security Act. No one would turn down the promise of financial security in old age, or as President Roosevelt said, a safeguard “against the hazards and vicissitudes of life.” I question if people think it is a good deal to pay more than 15 percent of your paycheck (including employer’s “contribution” and Medicare tax) to the government, thus taking your future savings out of your control. If you die young you get nothing; your savings go, not to your children, but into the government’s black hole.

Patients and doctors alike have been sucked in by statements of questionable accuracy. In promoting the Affordable Care Act, President Obama on multiple occasions assured us, “if you like your doctor you can keep your doctor, if you like your health plan you can keep your health plan.” The ACA likely would not have gotten traction if he had said, “We don’t know what the insurers will do after the ACA is passed, so good luck.”

Electronic Medical Records (EHRs) were part of the bumpy road to the ACA. President Obama, promised that EHRs would “cut red tape, prevent medical mistakes and help save billions of dollars each year.” The unwary believed the puffery versus the facts.

The promise: EHRs are efficient. Reality: Hundreds of different brands mean that the records cannot be exchanged between physicians, but they can be sent to the Office of the National Coordinator for Health Information Technology.

The promise: EHRs save time. Reality: Doctors spend half their time on the computer rather than talking with patients.

The promise: EHRs save lives. Reality: Software problems have memorialized incorrect information. One in 5 people surveyed by Kaiser Family Foundation has found a mistake in their records.

It sounds so virtuous to insist that “healthcare is a right.” Thus, if you do not believe medical care should be free, you are not a moral person. This technique echoes Aldous Huxley’s view that “the propagandist’s purpose is to make one set of people forget that the other set is human.” (Of course, bearing arms is a constitutional right, but guns are not given away for free. Indeed, gunowners are thought by some to be horrible people). Free medical care for all is short, simple, and seductive.

The promise: Medical services are free. Reality: Government may deny the request for prior authorization for your treatment, or ration treatments for older folks, such as hip and knee replacements and cataract surgery. In the government health system 307,000 Veterans might have died waiting for medical care.

The promise: Drugs are free. Reality: The medication your physician thinks is best for you is not on the government’s formulary.

The promise: There are no without out-of-pocket costs. Reality: Private health insurance is abolished, leaving no consumer choice.

The promise: It’s free! Reality: Your taxes will be raised to heights unknown.

“Free” is America’s new verbal Potemkin village of health care, where Susie gets a free birth if she survives her abortion, free medical care for life, and even free food. All Susie has to do for herself is breathe. This is a panderer’s view of America. In fact, we are a country of individuals who want to govern their own lives and of physicians who want the freedom to properly care for their patients.

Dr. Marilyn M. Singleton is a board-certified anesthesiologist. She is President of the Association of American Physicians and Surgeons (AAPS). She graduated from Stanford and earned her MD at UCSF Medical School.  Dr. Singleton completed 2 years of Surgery residency at UCSF, then her Anesthesia residency at Harvard’s Beth Israel Hospital. While still working in the operating room, she attended UC Berkeley Law School, focusing on constitutional law and administrative law.  She interned at the National Health Law Project and practiced insurance and health law. She teaches classes in the recognition of elder abuse and constitutional law for non-lawyers. She lives in Oakland, Ca.