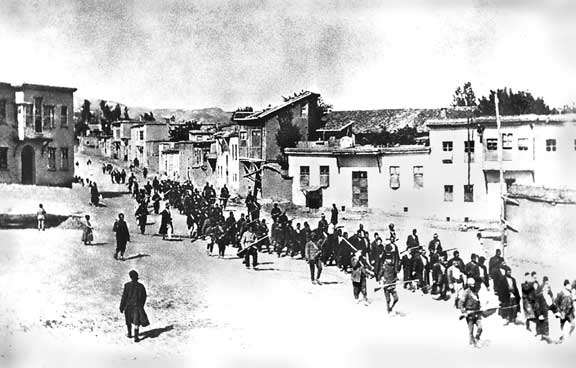 2,153 persons at JewsWithIlhan.org, though, defended her.

AIPAC can’t legally donate to politicians.  Its Congressional Club members, however, must do so.  AIPAC members ‘bundle’ individual political contributions.   Some AIPAC officials head political action committees (PACs) which back candidates.  And an AIPAC affiliate flies Congresspersons to Israel.

After Israel, Jewish organizations’ imperative is the Holocaust.

Diminishing/denying the Holocaust is a crime in many European countries.

Yet leading Jewish organizations have long diminished/denied the 1915–23 genocide Turkey committed against 1.5 million Christian Armenians on their ancient homeland.

Also, AIPAC, ADL, AJC, B’nai B’rith, and JINSA (Jewish Institute for National Security of America) have colluded with Turkey to defeat Armenian Genocide resolutions in Congress.  Demanding Holocaust legislation while thwarting recognition of another genocide is hypocrisy and moral bankruptcy.

“The Holocaust,” says Israeli journalist Yossi Melman, is often “an instrument of policy, not a moral compass.”

Beginning in or before the 1980s, Turkey sought help against critics, including Armenian and Greek Americans, of its human rights abuses.  Turkey’s then-ally Israel enlisted Jewish American organizations into defending Turkey.   Jewish/Israeli/Turkish media have penned millions of words confirming this.

JINSA’s Yola Habif Johnston confessed in 2006 that AIPAC, AJC, B’nai B’rith, and her organization “have been working with the Turks” for more than 15 years.  “The Jewish lobby has quite actively supported Turkey to prevent the so-called Armenian genocide resolution from passing.”  ADL was similarly guilty.

In 2007–8, Massachusetts’ Armenian Americans confronted the ADL.  Hundreds of principled Jewish and non-Jewish activists, scholars, journalists, and organizations throughout America and internationally approved of the Armenian-led campaign.

Numerous Jews and Israelis have sympathized with Armenians more than have many Christians.  Though Israel won’t acknowledge the Armenian Genocide, the Knesset’s Education Committee wants it to.

Three years ago, ADL finally recognized the Armenian Genocide but merely on a “blog.”  And its pledge to boost Armenian resolutions remains unfulfilled.  Too little, too late anyway.  The ADL is certainly no civil/human rights group.

Jacobs once cruelly boasted that AJC’s stance on the Armenian Genocide was “bs.”  AJC, he vowed, “will be Turkey’s friends officially in Congress.”

Azerbaijan’s “lobby in the U.S.,” declared Aliyev, “is the Jewish community.”

Shamefully, many Jewish writers worldwide have been gratuitously slandering Armenian Americans and Armenia, all because Israel buys oil from and sells billions in weapons to Azerbaijan, Armenia’s adversary.

Only in 2015 did AJC say it would support U.S. acknowledgment of the Genocide.  AJC’s promise remains unfulfilled.  Too little, way too late.

Though Jewish groups aren’t solely at fault, their genocide hypocrisy and clout make them uniquely blameworthy.

Jewish organizations believe Holocaust diminishment/denial is anti-Semitism and, hence, “hate.”  When those organizations diminish/deny the Armenian Genocide, are they not anti-Christian-Armenian “hate” groups?

Israeli-Turkish relations have soured.  Jewish groups sold their souls for nothing.

Their opportunity to apologize, open their Turkish-related archives, and make reparations is gone.

Also gone is their credibility on civil/human rights and genocides.

Congress and state legislatures must now investigate and subpoena these two-faced organizations.