Joan Mellen’s Blood in the Water: How the U.S. and Israel Conspired to Ambush the USS Liberty 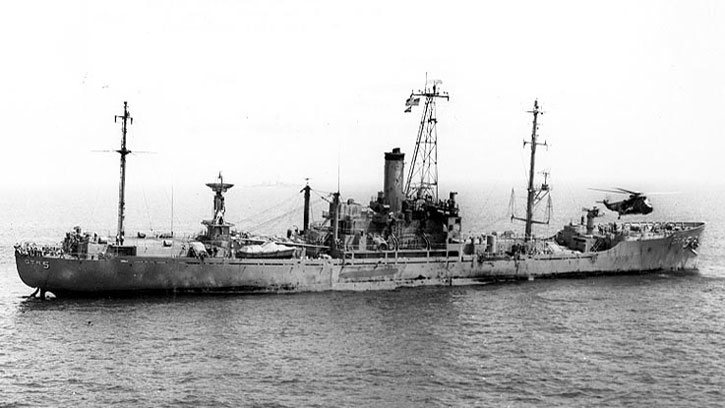 Joan Mellen's book "Blood in the Water" argues that the US itself was complicit in Israel's attack on the American ship the USS Liberty in June 1967.

If you are able read just one book in 2019, I urge it to be Joan Mellen’s Blood in the Water: How the U.S. and Israel Conspired to Ambush the USS Liberty.

The author on the basis of meticulous research probes every detail to establish beyond a shadow of a doubt that the sinking of USS Liberty in the midst of the 1967 War is the greatest moral and political scandal in all of American history. In what was long described as a ‘mistake’ or ‘accident’ Israeli planes and submarines attacked the Liberty, killing 34, wounding 174 American naval personnel. Subsequent critical writing had established convincingly that the United States Government refused to authorize an inquiry that would have established that Israel deliberately attacked the ship of its ally. Those who took the trouble to read the critical literature or were among the surviving crew members were shocked by a coverup that was willing to overlook what amounts to the murder of American servicemen. Mellen addresses these allegations in a definitive manner that includes evidence that Lyndon Johnson, as president, called off a rescue operation, which seems confirmed, and if properly pursued would seem to indicate an offense both impeachable and indictable as treason.

This alone would make Joan Mellen’s book well worth reading, but her contribution goes far beyond what prior research and scholarly writing had established and alleged. She demonstrates that the real story of the Liberty attack was far worse than a coverup of Israeli criminality, it was ‘collusion,’ that is, a deliberated collaborative attack by Israel and the United States. The purpose of this operation was to provide a satisfactory pretext for launching retaliatory strikes against Egypt with the primary objective of destabilizing the Egyptian Government and removing Gamel Abdul Nasser from power. At the time, Nasser was a thorn in the back of both Israel and the United States. The American and Israeli national security establishments, including some identified sinister figures in the CIA and Mossad, regarded Nasser as a major threat to American regional objectives in the Middle East, Israeli security and expansionist ambitions, as well as to the prevailing grand strategy of the Cold War.

Such shocking revelations, even long after the events, comes at a time when the momentous events surrounding the 9/11 attacks remain shrouded in suspicion and mystery. It is notable that the Liberty incident occurred under a Democratic president. It would seem that political liberalism is always subordinate to the security imperatives of the militarized American state. What happened in 1967 could easily occur in 2019. None of the pieces have been removed from the great geopolitical board game of the deep state. What Mellen demonstrates so clearly is that democratic elections and public trust are cast aside to satisfy the demonic greed of those within the government bureaucracy who are in the secretive business of slaying monsters in distant settings while pacifying their own citizens with lies and evasions.

We need to read and upon reflect upon Blood in the Water, asking ourselves two familiar political question: ‘what needs to be done? How can it be done?” It is little wonder that although published in 2018 this crucial book has so far flown far under mainstream radars.

Blood in the Water published by Prometheus Books can be obtained from all booksellers, including Amazon.

This article was originally published at RichardFalk.WordPress.com on March 29, 2019.