Since 2008, the UK growth rate suggests business as usual, yet the British pound has fallen more than by a third in the same period.

After the misguided referendum three years ago, the Brexit end-game is about to begin. In the UK, it means political division and fiscal erosion. Moreover, global growth prospects will not remain immune to turmoil in the world’s fifth largest economy.

Initially, London’s goal was to wheel and deal the best possible deal with Brussels. That became more difficult after mid-January when the House of Commons rejected PM May’s EU withdrawal agreement. The rejection compounded the odds for a risky and disorderly no-deal Brexit scenario.

The risks for volatility are also fueled by the impending European Parliament election in May 25-26, which is likely to strengthen Euroskeptics, anti-immigration forces, and radical right and left, at the expense of mainstream parties.

Behind official posturing, Brussels would likely prefer London to revoke the Article 50 of the EU Treaty, avoid Brexit and stay in the EU until UK lawmakers can agree about a future course. Yet, a no-deal Brexit scenario can no longer be excluded.

As the Brexit looms, political fallout is spreading. Recently, eight Labor members of the parliament left the party in protest at Jeremy Corbyn’s leadership to form a breakaway party. Days later, three Conservative MPs quit Conservative Party denouncing May’s “disastrous” handling of Brexit and its shift to the right.

The ex-Conservative MPs joined the former Labor lawmakers on the opposition benches in Parliament. Labor and Conservatives could face more resignations, with members of the new Independent group saying they expect more MPs to join them.

London must cope with three Brexit scenarios by the March 29 deadline to exit the European Union (EU). In the first scenario—Brexit Deal—the EU divorce will materialize after Prime Minister Theresa May’s deal. That’s the markets’ base case.

In the second scenario—Brexit Deferral—the goal would be to shun a no-deal. This is an option that markets consider unlikely.

In the third scenario—No Brexit Deal—the objective would be to revoke the Article 50 of the EU Treaty to retain the current status quo. This scenario is perceived as improbable by the markets.

But what if May fails to secure a Brexit deal?

Then the Brexit Deal will be undermined, even though Brexit will still loom ahead. In turn, the Brexit Deferral scenario would result in an election or a second referendum, or both. The No Brexit deal would remain the same—Article 50 would be revoked to sustain the status quo.

These scenarios are the direct result of Conservatives’ double miscalculation.

How to undermine the future, twice

If the UK’s neoliberal economic policies peaked in the Thatcher years, they were sustained by labor governments led by Tony Blair (1997-2007) and Gordon Brown (2007-2010). After the global crisis, Conservatives’ David Cameron won a mandate to govern in a coalition with Liberal Democrats.

Cameron championed fashionable social causes, including same-sex marriage and the UN target for aid spending, but cut down government’s large deficits through harsh austerity measures. In 2011, he became the first UK PM to “veto” the EU treaty, to bargain better membership terms with Brussels. Two years later, he pledged that, should his Conservatives win the parliamentary majority in the 2015 election, the government would negotiate more favorable terms for British membership of the EU, before a referendum.

As the gamble failed, Cameron was succeeded by Theresa May, a veteran “law and order” Tory. Ed Miliband resigned as Labor’s leader and was followed by “hard left’s” Jeremy Corbyn. Both parties sought to defuse Euroscepticism that the right-wing UK Independence Party (UKIP) and Nigel Farage had popularized.

In April 2017, May announced a snap general election, “to guarantee certainty and security for years ahead.” Like Cameron in 2016, she thought she could capitalize on her popularity to ensure political consolidation before talks with Brussels. And like Cameron, she miscalculated.

Conservatives remained the largest single party, but lost their majority, resulting in a minority government.

As the risk of a no-deal seems to be increasing, markets are re-pricing the Brexit’s economic consequences. The likely effects include a moderate recession after the first quarter of 2019. Given the current indications, the British economy could suffer a loss of some 5.5% GDP over three years; while the UK’s direct loss of trade globally could amount to almost 2% of its GDP over 2020-2021.

The Bank of England (BoE) has already indicated that a no-deal Brexit could result in a reversal of the BoEs current gradual normalization of interest rates. As volatility broadens, an easing or an extended pause is more likely than continued tightening. In turn, markets no longer expect an upcoming rates hike by the European Central Bank (ECB) and are speculating about a new ECB round of stimulus spending via cheap bank loans. While these policies will be deemed pragmatic, the simple reality is that they will be predicated on more debt, disinflation and depreciation over time.

During the 2008 global crisis, UK’s annual growth rate took a severe hit, but bounced back by the early 2010s. The annual growth rate has been around 1.9% to 2.1% since then. Yet, the story of the British pound shows a very different picture. 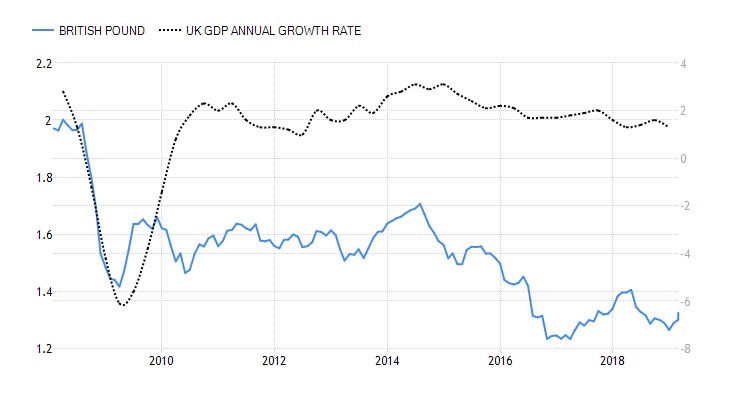 At the eve of the global crisis, one pound was still almost 2 U.S. dollars. Despite a plunge to 1.40 around 2009, the pound rose to almost 1.70 in the early 2010s; a level it maintained until 2015. When the U.S. Federal Reserve began its normalization and Cameron declared the Brexit referendum, the pound began to plunge, hitting the low of 1.20 in 2017 and remaining around 1.30 U.S. dollar.

Since 2008, the UK growth rate suggests business as usual, yet the British pound has fallen more than by a third in the same period.

And the Brexit erosion is only about to start.