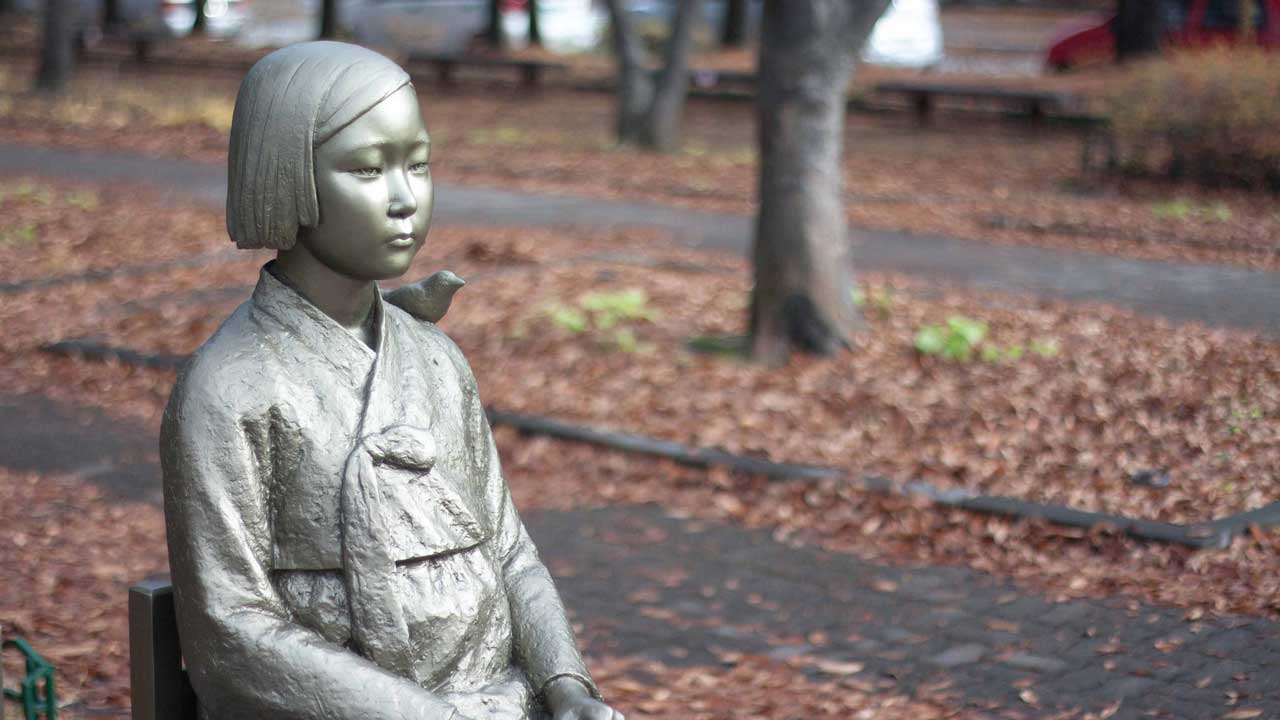 If the Abe administration fails to acknowledge the past, it cannot win the future that overshadows over a declining nation.

In December 2017, a memorial was erected along the Roxas Boulevard facing Manila Bay. It commemorated the Filipino “comfort women”, who were forced to work as sexual slave labor in Japanese military brothels during World War II.

In late April 2018, after Japan’s Ministry of Foreign Affairs said it was “extremely regrettable” such statues were erected, the Department of Public Works removed the statue. As Japan has an important role in infrastructure investment, President Duterte suggested the statue could be placed in a private property.

On December 28, another statue for the former “comfort women” was installed in a Catholic-run shelter for the elderly and the homeless in San Pedro, Laguna. After the Japanese embassy in Manila stated such statues were “extremely disappointing, not compatible with the Japanese government,” the statue was removed two days later.

This time the Duterte government noted that the statue was “dedicated to peace and women’s empowerment,” used private funds, and was built inside private property. It was freedom of expression. Lila Pilipina, an advocacy group for Filipina comfort women, stressed the Japanese government demands that we “forget its war crime.”

The removal of the second statue fosters a perception there is a systematic effort by the Shinzo Abe government to eradicate public statues for “comfort women.” By its logic, all Holocaust memorials should be taken down, along with other memorials dedicated to historical atrocities because they all are inconvenient reminders about the past. Yet, the German government has a very different stance toward the Nazi era. Mental lobotomy does not prevent real-life tragedies.

Until 1993, Japanese government had denied that the history of the “comfort women.” But that year, after the government study, Chief Cabinet Secretary Yohei Kono recognized that Japanese Imperial Army had forced “comfort women,” to work in military-run brothels during World War II. In 2015, Kōno re-affirmed the statement.

So why is the Abe administration to revise history? The reasons are historical – and perhaps personal.

Today, the number of Japan’s wartime sex slaves is estimated at 200,000 women, although Chinese scholars in Shanghai, where a Japanese “comfort station” was established already in 1932, put the real figure at 360,000-400,000.

In revisionist Japanese history, the role of these women has been downplayed. The very term “comfort women” is a euphemism for Japanese Imperial Army’s sex slaves. Most women were from areas occupied by Japan, particularly China and Korea, but also the Philippines. There were “comfort stations” in Myanmar, Thailand, Vietnam, Malaysia, Taiwan, Indonesia, Singapore, East Timor and elsewhere. There were also hundreds of “comfort women” from the Netherlands and Australia.

Unlike his predecessors as Prime Minister and the head of the Liberal Democratic Party, Abe has far-right views about history. He belongs to the ultranationalist Nippon Kaigi, which seeks to re-militarize Japan and to revive Imperial Japan and which, among other things, vehemently denies Japan’s “comfort women” history during World War II. That’s why in the late 1990s, he led the controversial Japanese history textbook reform, which downplayed Japan’s war crimes, including crimes against “comfort women.”

But there is also a more personal reason. Abe comes from a political family dynasty. His grandfather Kan Abe and father Shintaro Abe were prominent politicians. His mother is the daughter of the highly controversial former Prime Minister Nobusuke Kishi. Starting in 1933, Kishi praised Nazi Germany as Japan’s model. In 1937, he signed a degree calling for the use of slave labor in Japanese puppet state Manchukuo. The enslavement of men paved the way to the exploitation of Chinese, Korean and other women as sex slaves in Japan’s occupied colonies in Asia.

Due to Kishi’s brutal rule in the Manchukuo and his participation in the Tojo War Cabinet during World War II, he was imprisoned for over three years as a Class A war criminal. In Germany, Nazi leaders were prosecuted, but not in Japan. When Washington launched its Cold War against the Soviet Union, it needed Japan as a key ally in Asia.

That’s when many Japanese war leaders were freed and enlisted by the U.S. to suppress Japanese communists and socialists. The most notable of them was Kishi, “America’s favorite war criminal.” who played a key role in the “1955 System,” which made the Liberal Democratic Party the dominant political force in Japan and America’s key ally until today.

Rising stakes in the international debate

Wartime sex slaves are not “just history.” While Abe’s reformers have tried to open the economy to more women, his politics promotes remilitarization that most Japanese oppose. And while Japan is one of the world’s major economies, it ranks only 110th worldwide in the Global Gender Report, far behind Myanmar and India. The lingering imperial fantasies contribute to Japan’s economic decline.

Forced silence about wartime sexual slavery is not acceptable in rest of Asia. In December, 2015, Abe and South Korean President Park Geun-hye, who was later impeached for corruption, agreed to settle the “comfort women” dispute. Tokyo would pay a paltry $8.3 million to a fund supporting remaining victims. South Korea would remain mum about the issue and remove a memorial statue for the victims.

South Koreans criticized the odd pact. After the imprisonment of the corrupt Park, Seoul began to demand recognition for its victims, along with a UN Committee (CEDAW). The UN human rights agency (OHCHR) also called on Japan to acknowledge its violation of the human rights of “comfort women,” take legal responsibility and punish responsible individuals.

As international appeals did not work, the debate moved to a new stage. Recently, a South Korean court authorized the seizure of assets belonging to Nippon Steel & Sumitomo Metal, after the Japanese firm failed to comply with an earlier order to compensate victims of forced labor. Last week, Tokyo called the court decision “extremely regrettable,” while South Korean President Moon Jae-in urged Japan not to “politicize the issue” and to take a “more humble” attitude towards the past.”

The issue of the “comfort women” should not be politicized. As the Kono Statement evidences, most of Japan’s political leadership and most Japanese have acknowledged the “comfort women” history since the early 1990s. As polls indicate, only about a fifth of the population doesn’t – and that’s Abe’s core constituency.

If the Abe administration fails to acknowledge the past, it cannot win the future that overshadows over a prosperous, but heavily indebted and declining nation.

The statues to commemorate the legacy of “comfort women” represent historical veracity and overdue moral right. Efforts to eradicate them will ultimately fail. When one is taken down, another will be erected elsewhere – until the truth prevails.

This article was originally published in The Manila Times on January 14, 2019.