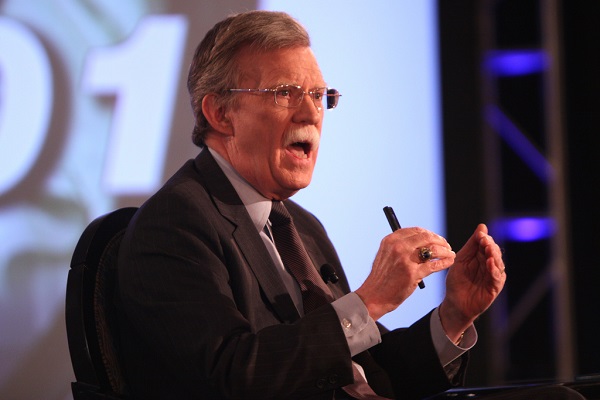 Contrary to the new US Africa strategy, which seeks militarization and portrays China as a threat, Africa needs more cooperative economic development.

Recently, the White House released its new U.S. Africa strategy, which seeks militarization and portrays China as a threat. Both are misguided. Africa can greatly benefit from Chinese and U.S. economic development.

In the United States, the media focus was on Bolton’s attack against U.S. adversaries and American aid. Specifically, Boston accused Russia and China of “predatory practices” in Africa.

In 2017, the United States had a $39.0 billion in total goods trade with Sub-Saharan African countries and a trade deficit of $10.8 billion. America’s largest export markets were South Africa, Nigeria, Ghana, Ethiopia and Angola. In imports, Cote d’Ivoire and Botswana played a role as well.

In the past, U.S. Africa strategy focused mainly on economic cooperation and aid, and secondarily on military cooperation. In the new strategy, the focus areas have been reversed. The ‘America First’ Africa strategy purports to address three core U.S. interests in Africa:First, advancing U.S. trade and commercial ties with nations across the region to the benefit of both the United States and Africa… Second, countering the threat from Radical Islamic Terrorism and violent conflict… And third, we will ensure that U.S. taxpayer dollars for aid are used efficiently and effectively.

While the first core interest ostensibly involves economic dealings, it actually doesn’t. The Trump administration “wants our economic partners in the region to thrive,” but it downplays all economic efforts to boost African prosperity.

It is the second principle that’s the key to the new U.S. strategy. According to Bolton, “ISIS, al-Qaida, and their affiliates all operate and recruit on the African continent, plotting attacks against American citizens and targets.” The new strategy sees Africa mainly as a base of Islamic terrorism, which must be defused in the continent so that it will not threaten American interests.

Moreover, the ‘America First’ stance portrays as adversarial the Chinese efforts to boost global economic integration through the One Road and Belt initiative in emerging and developing economies. China’s economic contribution is mainly an effort to “dominate the world.” As Bolton puts it: “[China’s] predatory actions are sub-components of broader Chinese strategic initiatives, including ‘One Belt, One Road’—a plan to develop a series of trade routes leading to and from China with the ultimate goal of advancing Chinese global dominance.”

Since economic facts do not support the Trump administration’s narrative, it relies increasingly on ideological trashing.

Since the mid-2010s, Washington has accused China of “neocolonialism” in Africa. The misguided narrative seeks to reframe the eclipse of the commodity super-cycle, which caused a drastic fall in commodity prices, as another Chinese plot.

In 2016, the value of China-Africa trade was $128 billion, almost three times bigger than U.S. trade with the continent. The largest African exporters to China comprise Angola, South Africa and the Republic of Congo, whereas the largest buyers of Chinese goods include South Africa and Nigeria. The Sino-African trade increased rapidly some two decades until the fall of the commodity prices since 2014, when the bilateral trade peaked at $215 billion. Since then, the value of African exports to China has been penalized, even as Chinese exports to Africa have remained steady.

Meanwhile, U.S. investment in China has collapsed. U.S. FDI into Africa grew through the Bush years, when the White House still hoped to benefit from the impending industrialization in several African economies. But as the Obama administration presented its Africa vision in the early 2010s, U.S. FDI first plunged and then collapsed.

When the administration began its attack against Chinese initiatives last fall, these outbursts were preceded by President Xi Jinping’s speech in the 2018 Forum on China Africa Cooperation (FOCAC) where Xi pledged $60 billion to the continent in loans, grants, and development financing.

The new U.S. Africa strategy is largely dictated by the concern that China has become Africa’s largest economic partner. In contrast to Bolton’s fearful images of Chinese negative impact in Africa, leading business consultancies, including McKinsey, offer very different accounts. The former is based on ideological bashing without facts. The latter reflects simple economic analysis:

Bolton on the U.S. Africa Strategy:

China uses bribes, opaque agreements, and the strategic use of debt to hold states in Africa captive to Beijing’s wishes and demands. Its investment ventures are riddled with corruption, and do not meet the same environmental or ethical standards as U.S. developmental programs.

McKinsey on China in Africa:

The Chinese “dragons”—firms of all sizes and sectors—are bringing capital investment, management know-how, and entrepreneurial energy to every corner of the continent—and in so doing, they are helping to accelerate the progress of Africa’s “lions,” as its economies are often referred to.

In the past two decades, Africa-China trade has been growing at some 20% per year. FDI has grown twice as fast in the past decade. McKinsey estimates China’s financial flows to Africa are 15% higher than official figures when non-traditional flows are included. China is also a large and fast-growing source of aid and the largest source of construction financing, which support Africa’s ambitious infrastructure developments.

But is Chinese infrastructure investment in Africa a threat to U.S. interests, really?

Ever since the release of the U.S. administration’s new 2017 National Security Strategy, China has been perceived as America’s “adversary” rather than a partner: “For decades, U.S. policy was rooted in the belief that support for China’s rise and for its integration into the post-war international order would liberalize China.”

The new Africa strategy is actually based on the old neoconservative Wolfowitz Doctrine, which in the early ‘90s deems that the American goal must be “to prevent the re-emergence of a new rival, either on the territory of the former Soviet Union or elsewhere that poses a threat.” That’s why the White House sees its China ties mainly in win-lose terms.

But there is another future scenario that sees the multipolar world economy as a strength rather than a liability. It is predicated on more stable, global prospects as developing economies focus on economic development, instead of militarization. Unlike the U.S. Africa strategy, the multipolar scenario would not foster “major power competition” in Africa. Rather, it supports a win-win scenario, in which both America and China would trade and invest, and provide development aid to African economies. That would accelerate modernization and industrialization across the continent and thus living standards. With rising prosperity, terror would diminish.

The multipolar scenario would fulfill the three U.S. core interests in Africa and foster triangular economic ties among the U.S., China and Africa, while intensifying modernization in the continent.  In contrast, the old new U.S. Africa strategy has potential to undermine such futures.

This article was originally published at China-US Focus on January 9, 2018.