Why Is Israel Afraid of Khalida Jarrar? 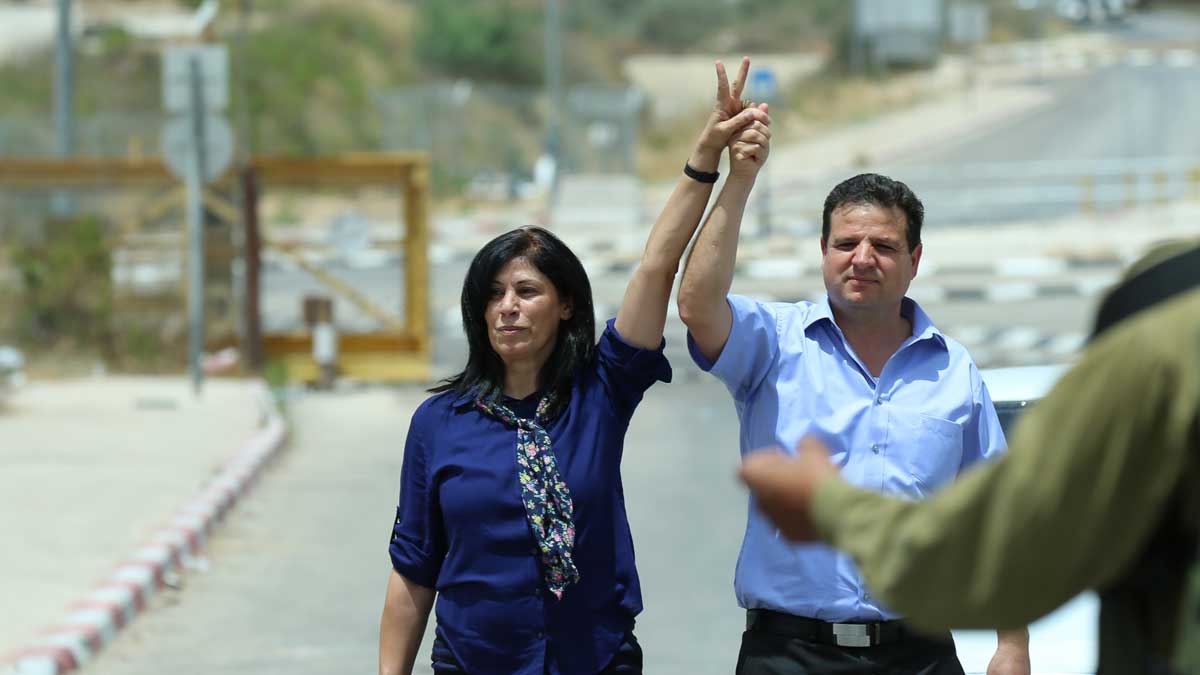 Israel has imprisoned Khalida Jarrar because her intelligence and respect for international law threaten its occupation regime.

When Israeli troops stormed the house of Palestinian parliamentarian and lawyer Khalida Jarrar on April 2, 2015, she was engrossed in her research. For months, Jarrar had been leading a Palestinian effort to take Israel to the International Criminal Court (ICC).

Her research on that very evening was directly related to the kind of behavior that allows a group of soldiers to handcuff a respected Palestinian intellectual, throwing her in jail with no trial and with no accountability for their action.

Jarrar was released in June 2016 after spending over one year in jail, only to be arrested once more on July 2, 2017. She remains in an Israeli prison.

On October 28 of this year, her ‘administrative detention’ was renewed for the fourth time.

There are thousands of Palestinian prisoners in Israeli jails, most of them held outside the militarily Occupied Palestinian Territories, in violation of the Fourth Geneva Convention.

However, nearly 500 Palestinians fall into a different category, as they are held without trial, detained for six-month periods that are renewed, sometimes indefinitely, by Israeli military courts with no legal justification whatsoever. Jarrar is one of those detainees.

Jarrar is not beseeching her jailers for her freedom. Instead, she is keeping busy educating her fellow female prisoners on international law, offering classes and issuing statements to the outside world that reflect not only her refined intellect, but also her resolve and strength of character.

Jarrar is relentless. Despite her failing health——she suffers from multiple ischemic infarctions, hypercholesterolemia and was hospitalized due to severe bleeding resulting from epistaxis——her commitment to the cause of her people did not, in any way, weaken or falter.

The 55-year-old Palestinian lawyer has championed a political discourse that is largely missing amid the ongoing feud between the Palestinian Authority’s largest faction, Fatah, in the Occupied West Bank and Hamas in besieged Gaza.

As a member of the Palestine Legislative Council (PLC) and an active member within the Popular Front for the Liberation of Palestine (PFLP), Jarrar has advocated the kind of politics that is not disconnected from the people and, especially, from the women who she strongly and uncompromisingly represents.

According to Jarrar, no Palestinian official should engage in any form of dialogue with Israel, because such engagement helps legitimize a state that is founded on genocide and ethnic cleansing, and is currently carrying out various types of war crimes; the very crimes that Jarrar tried to expose before the ICC.

Expectedly, Jarrar rejects the so-called ‘peace process’, a futile exercise that has no intention or mechanism that is aimed at “implementing international resolutions related to the Palestinian cause and recognizing the fundamental rights of the Palestinians.”

It goes without saying that a woman with such an astute, strong position, vehemently rejects the ‘security coordination’ between the PA and Israel, seeing such action as a betrayal to the struggle and sacrifices of the Palestinian people.

While PA officials continue to enjoy the perks of ‘leadership’, desperately breathing life into a dead political discourse of a ‘peace process’ and a ‘two state solution’, Jarrar, a Palestinian female leader with a true vision, subsists in HaSharon Prison. There, along with dozens of Palestinian women, she experiences daily humiliation, denial of rights and various types of Israeli methods aimed at breaking her will.

But Jarrar is as experienced in resisting Israel as she is in her knowledge of law and human rights.

In August 2014, as Israel was carrying out one of its most heinous acts of genocide in Gaza——killing and wounding thousands in its so-called ‘Protective Edge’ war——Jarrar received an unwelcome visit by Israeli soldiers.

Fully aware of Jarrar’s work and credibility as a Palestinian lawyer with an international outreach—she is the Palestine representative in the Council of Europe—the Israeli government unleashed their campaign of harassment, which ended in her imprisonment. The soldiers delivered a military edict ordering her to leave her home in al-Bireh, near Ramallah, for Jericho.

Failing to silence her voice, she was arrested in April the following year, beginning an episode of suffering, but also resistance, which is yet to end.

When the Israeli army came for Jarrar, they surrounded her home with a massive number of soldiers, as if the well-spoken Palestinian activist was Israel’s greatest ‘security threat.’

The scene was quite surreal, and telling of Israel’s real fear—that of Palestinians, like Khalida Jarrar, who are able to communicate an articulate message that exposes Israel to the rest of the world.

It was reminiscent of the opening sentence of Franz Kafka’s novel, The Trial: “Somebody must have made a false accusation against Joseph K., for he was arrested one morning without having done anything wrong.”

Administrative detention in Israel is the re-creation of that Kafkaesque scene over and over again. Joseph K. is Khalida Jarrar and thousands of other Palestinians, paying a price for merely calling for the rights and freedom of their people.

Under international pressure, Israel was forced to put Jarrar on trial, levying against her twelve charges that included visiting a released prisoner and participating in a book fair.

Her other arrest, and the four renewals of her detention, is a testament not just to Israel’s lack of any real evidence against Jarrar, but for its moral bankruptcy as well.

But why is Israel afraid of Khalida Jarrar?

The truth is, Jarrar, like many other Palestinian women, represents the antidote of the fabricated Israeli narrative, relentlessly promoting Israel as an oasis of freedom, democracy and human rights, juxtaposed with a Palestinian society that purportedly represents the opposite of what Israel stands for.

Jarrar, a lawyer, human rights activist, prominent politician and advocate for women, demolishes, in her eloquence, courage and deep understanding of her rights and the rights of her people, this Israeli house of lies.

Jarrar is the quintessential feminist; her feminism, however, is not mere identity politics, a surface ideology, evoking empty rights meant to strike a chord with western audiences.

Instead, Khalida Jarrar fights for Palestinian women, their freedom and their rights to receive proper education, to seek work opportunity and to better their lives, while facing tremendous obstacles of military occupation, prison and social pressure.

Khalida in Arabic means “immortal”, a most fitting designation for a true fighter who represents the legacy of generations of strong Palestinian women, whose ‘sumoud’—steadfastness—shall always inspire an entire nation.