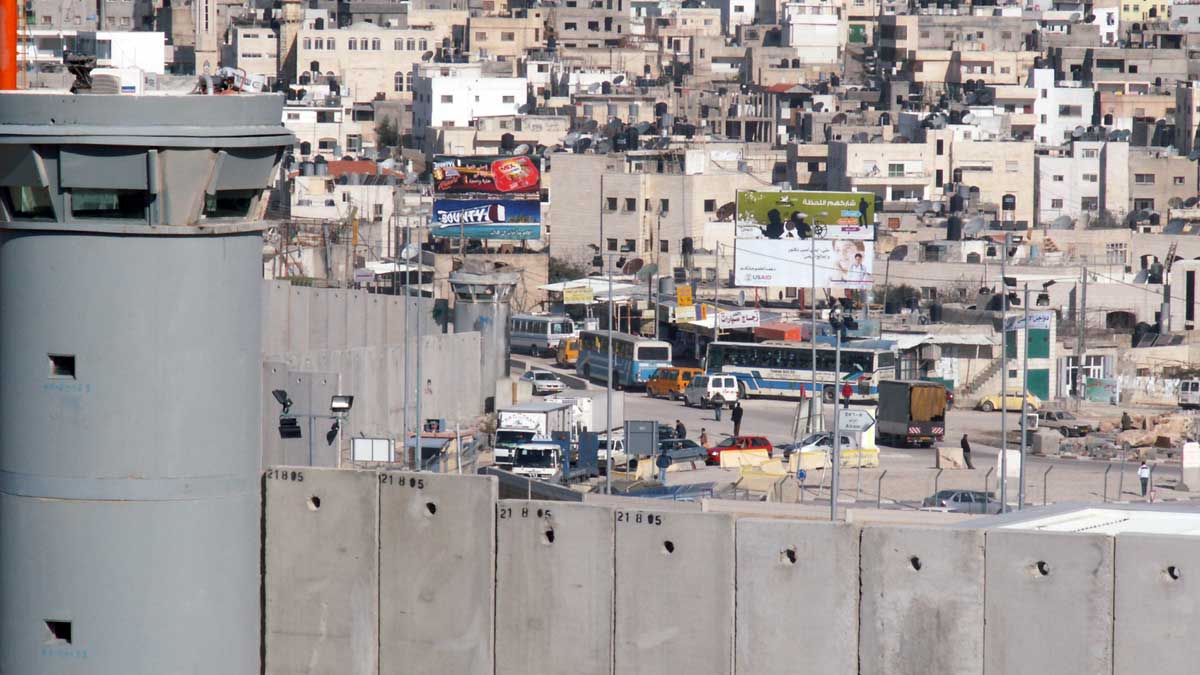 In the quest to change Israel's very nature, the Netanyahu government is pushing Palestinians to an edge—with the support of the Trump White House.

Recently, a report by the International Monetary Fund (IMF) warned that “deepening rifts between key stakeholders and surging violence in Gaza further imperil prospects for peace.”

That should not come as a surprise anymore.

While economic and strategic polarization is steadily deepening between Israel and the Palestinians, the “peace initiatives” of the Trump White House are undermining half a century of American diplomacy and pushing the region closer to an abyss.

In the past, the Netanyahu government has vehemently opposed all parallels with South African apartheid. Unfortunately, new data suggests that under apartheid South African blacks had more to hope for than Palestinians today.

Between 1994 and 2017, Israeli GDP per capita, adjusted to purchasing power parity, increased by 150%; in the West Bank and Gaza, the comparable figure was 160%. Yet, the Palestinian starting-point is so low that progress in living standards is largely fiction.

In 1994—amid the peace talks in Oslo—Palestinian living standards were only 6.4% ($1,526) of the Israeli level ($23,693). At the time, the hope was that peace would bring increasing stability, which would foster prosperity and rapid catch-up growth—until the radical-right assassination of Prime Minister Yitzhak Rabin triggered still another cycle of violence. 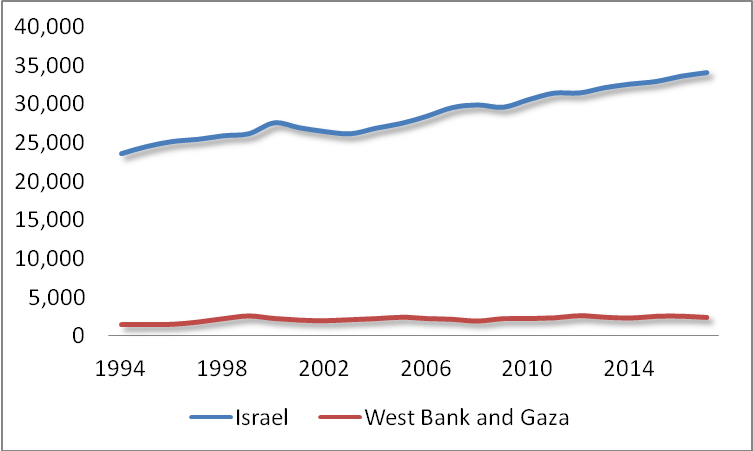 Last year, Palestinian living standards were about 7.3% ($2,494) of the Israeli level ($34,135). After more than two decades of new wars and friction, terrorism and restrictions, the catch-up has amounted to less than a percentage point.

Let’s set aside political debates about the causes and only focus on economic facts; i.e., changes in income polarization. And let’s compare the last two decades of apartheid South Africa with the past two decades between Israel and Palestinians.

In contrast, the comparable Palestinian level was half of that figure last year. 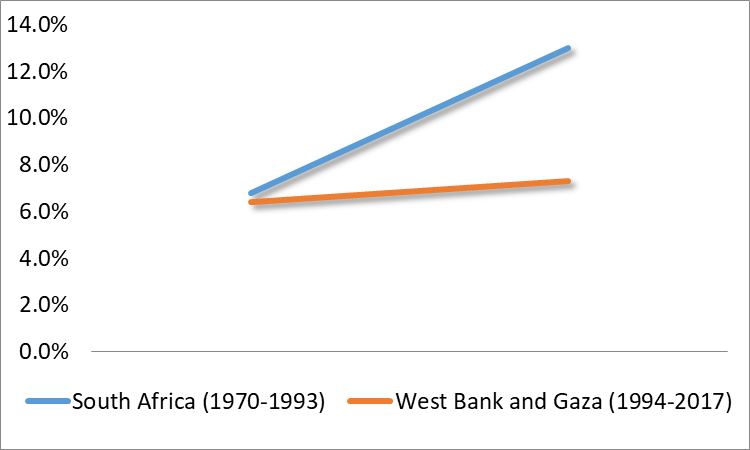 Ironically, South African apartheid was more conducive to economic progress in its last two decades than life in the West Bank and Gaza in the past two decades.

Moreover, the Netanyahu government’s economic policies have also dramatically increased economic polarization in Israel. In the early 1990s, the Gini coefficient, a measure of inequality, was around 35 in Israel, at the level of Portugal and Italy. Closer to 43 today, it is among the highest in OECD countries, and at the level of Nigeria and Zimbabwe. But there may be still worse ahead.

Protests in Gaza ahead of, and turbulence since Israel’s Independence Day and the relocation of the U.S. embassy to Jerusalem in May, mark the most serious escalation since the 2014 war. With his decision, President Trump departed from the decades-long U.S. executive branch practice not to recognize Israeli sovereignty over any part of Jerusalem.

Meanwhile, a steep decrease in Palestinian Authority and external funding to Gaza since 2017 has worsened already dangerous humanitarian conditions there. According to the World Bank, Gazans’ real per capita incomes have fallen by one-third since 1994, owing largely to the West Bank-Gaza split and to Israel’s and Egypt’s tight controls on goods and people transiting Gaza’s borders.

Instead of seeking to alleviate acute distress in the region, the White House has given de facto support to the new nation-state law, which defines Israel as a Jewish nation-state, despite a significant Arab minority. Unsurprisingly, the new law has been opposed by demonstrations and a high-profile petition by Israeli intellectuals—including Amos Oz, David Grossman, A. B. Yehoshua, Eshkol Nevo, Etgar Keret and Orly Castel-Bloom—who demand the Netanyahu government to abolish it: “The nation-state law, according to which the State of Israel is the national state of the Jews only, expressly permits racial and religious discrimination, nullifies Arabic as an official language alongside Hebrew, does not mention democracy as the foundation of the country and does not mention equality as a basic value.”

In this status quo, Trump’s indiscriminate support for the Netanyahu government effectively nullifies any remaining impression about the U.S. as a “neutral arbiter” in the peace process. What makes the moment even more dangerous is Netanyahu’s inclination to ignore the warnings of Israel’s highest defense authorities, the willingness of the Trump administration to embolden these fatal shifts, and the erosion of any remaining hope on the Palestinian side.

At the eve of the Yom Kippur War in 1973, when I toured the West Bank and Gaza, what was most striking was the apparent calm on the surface and the lingering tensions behind the official façade. It was this odd mixture of hollow expectations and raw realities that accounted for the nightmares that ensued.

After the Yom Kippur War, the Labor coalition began to expand the boundaries of Jerusalem eastward, which encouraged a group of Messianic settlers to create a foothold in the West Bank, including Ma’ale Adumim by the Gush Emunim, which sparked a protest by the “Peace Now” movement. I was there, as was my good friend Amos Oz, the famous Israeli author and one of the leaders of the peace movement. The concern was that if the settlers were permitted to create a substantial de facto presence, it might be legitimized over time with de jure measures, which would undermine Israel’s foundations, polarize the relationship between Israel and the Palestinians, while fostering cycles of terror and conflicts.

Despite a relatively broad popular opposition against the settlements, successive Israeli governments failed to contain them, despite Egyptian President Sadat’s bold peace initiative. Once again, the writing on the wall was ignored and the ‘80s wars in Lebanon ensued, along with the first large-scale Palestinian uprising against Israel in the West Bank and Gaza at the turn of the ‘90s. That’s when the Madrid Conference in 1991 and the subsequent Oslo Accords offered a glimpse of an alternative future scenario—but one that perished after Rabin’s assassination.

Today, half a century has passed from the Six-Day War and the Israeli conquest of the West Bank and Gaza. According to the Peace Index by the Israel Democracy Institute, last July three out of every four Israelis (74%) viewed the chances of Trump’s peace plan being a success as low or very low. According to the most recent survey, 89% of Israeli Jews do not see peace in the horizon. Almost half of Israeli Jews believe the Palestinians should have a state of their own. More think the two-state solution would be impossible to implement. After a generation of increasing bitterness, the share of the skeptics is relatively higher in younger age groups.

The message is fairly clear. Most Israelis believe that President Trump’s initiatives are undermining peace in the region. Most support a two-state plan. But since Washington is not seen as a neutral arbiter, a lasting peace plan is not enforceable.

As the U.S. provides one-third of the annual budget of the UNRWA, the vital relief agency for Palestine refugees since 1948, and has refused to make further contributions, some 5.4 million Palestinian refugees in the West Bank and Gaza, and in Jordan, Lebanon, and Syria find themselves in a new situation.

Reportedly, Israel supported only gradual reduction of the UNRWA’s funding and no reductions in Gaza until Netanyahu changed course without consulting his own security officials. Meanwhile, leading Israeli defense authorities have suggested that steep UNRWA cuts could further radicalize Gaza and destabilize the West Bank.

As the IMF data suggests, the status quo is entering an entirely new stage, in which economic agony could result in a failed state before an actual state is formed, while militarization of the crisis and the absence of hope on the Palestinian side could unleash even more desperate waves of terror internationally.

Half a century of policy mistakes should be an adequate warning.

This article was originally published at Consortium News on October 16, 2018.