Is the White Male Victimizer or Victim? 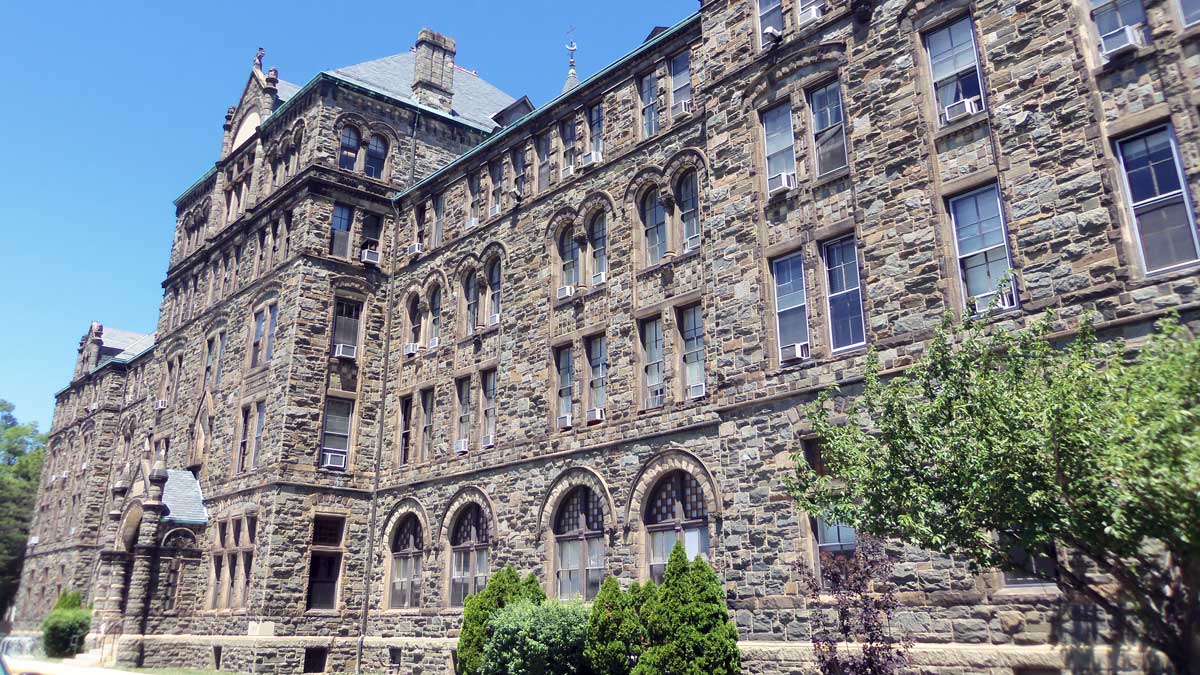 Caldwell Hall at the Catholic University of America (Farragutful/CC BY-SA 3.0)

Identity Politics has taken over public and private universities and the public school system, diverting resources away from education to thought-policing.

In my October 2 column I pointed out the disparity in treatment of the male football coach at the University of Massachusetts and a radical feminist professor at Georgetown University.

The disparity is amazingly extreme. The football coach had no intention of offending anyone when he used the word “rape” to express his opinion that his players had lost the game due to home team officiating. However, the Georgetown feminist professor had every intention of offending the male members of the Senate Judiciary Committee and the Supreme Court nominee when she said:

“Look at this chorus of entitled white men justifying a serial rapist’s arrogated entitlement. All of them deserve miserable deaths while feminists laugh as they take their last gasps. Bonus: we castrate their corpses and feed them to swine? Yes.”

There is no evidence whatsoever that Kavanaugh is a “serial rapist.” By calling him one, she is guilty of libel. Kavanaugh should sue her for damages.

Now we have another example of the extreme double standards universities apply to males and females. Dean William Rainford, head of the Catholic University of America’s School of Social Service raised an appropriate legal question about the allegations of Julie Swetnick, another woman to come forward with allegations trying to connect Kavanaugh to sexual misbehavior. According to Swetnick she was at unchaparoned parties at which Kavanaugh was present where females were gang raped, herself included.

Her story was dismissed by everyone except the most crazed male-hating feminists as simply unbelievable. She claimed attendance at many gang rape parties. Why did she continue to go to the gang rape parties? Why didn’t she and the other numerous victims report the crimes? As Swetnick is several years older than the underage teens whose parties she attended, as an adult engaged in sex with underage males, was she a victim or a perp?

According to the way law has been enforced, she was a perp. It is fortunate for Swetnick that no responsible person believes her, or she could be indicted for statutory rape.

Here is what Dean Rainford tweeted: Swetnick is 55 years old. Kavanaugh is 52 years old. Since when do senior [high school] girls hang out with freshmen boys? If it happened when Kavanaugh was a [high school] senior, Swetnick was an adult by her admission drinking with and having sex with underage boys. In another universe, he would be victim and she the perp.

This is a correct legal point.

For making this correct point which definitely should be part of the evaluation of the credibility of Kavanaugh’s accusers, Catholic University of America president John Garvey, who is as intimidated by radical feminists as Georgetown’s president, declared Dean Rainford’s remarks to be “unacceptable” and suspended Dean Rainford for the semester. The cowardly Garvey went on to declare Swetnick to be a “victim” toward whom Dean Rainford “demonstrated a lack of sensitivity.”

There is no evidence whatsoever that Swetnick is a victim. Apparently Garvey has paid no attention to the Kavanaugh affair or has been brainwashed that Swetnick is a victim. Garvey has apparently given no thought as to how he has undercut the authority of his dean when he is reinstated. A man forced to grovel like this for introducing law into the discussion is ruined:

“I offer no excuse. It was impulsive and thoughtless and I apologize. … Victims who suffer assault and abuse need to be heard, respected, and provided treatment and justice.”

Do note that in the total absence of any evidence that there was any sexual assault; assault is now accepted by President Gravey and Dean Rainford as a fact. So here we have two high administration officials in a Catholic university who think that accusation alone, even a vague one without witnesses or evidence, suffices as evidence.

When we cannot find respect for evidence and rational inquiry even in our universities, we know the country is lost.

The situation is as bad or worse in elementary schools even in the South, where it is tradition to teach children to show respect to adults by using “yes sir, no sir, yes ma’am, no ma’am.” A 10-year old boy was disciplined in North Carolina for addressing his teacher as “ma’am.”

How did this come about? Perhaps the answer is that Identity Politics has taken over public and private universities and the public school system.

Identity politics with the proliferation of “victim groups” has succeeded in diverting university resources away from teaching to policing “microaggressions.” Consequently, bureaucracy has exploded while students are taught by adjunct professors hired on the outside to teach courses for a couple thousand dollars. There have been a number of reports that 75% of university budgets are spent on administration.

I wondered how there could be that many administrators, but Taki’s Magazine, citing the work of journalist Heather MacDonald (read her book, The Diversity Delusion), explains:

“For example, Berkeley budgets $20 million per year for 150 full-time staffers in its diversity nook, the Division of Equity and Inclusion. At UCLA, Jerry Kang, the Vice Chancellor of Equity, Diversity, and Inclusion and a leading advocate of the pseudoscience of implicit bias, was paid $444,234 in 2016.

“MacDonald notes the career arc of the new president of San Diego State, Adela de la Torre, who had previously built a power base at UC Davis consisting of 28 nonacademic departments such as:

White male students both in the US and UK tell me that they are uncomfortable in their university environments. There are all sorts of speech code enforcers waiting to jump on them. They refrain from participating in class discussions out of fear of using a proscribed word, such as “girls,” that sends them to sensitivity training. They know that they can be framed up on any serious charge, just like the Duke University Lacrosse team that was falsely indicted for raping a stripper and Phi Delta Theta fraternity at Georgia Tech that was suspended on an unsubstantiated racist charge.

In history, anthropology, sociology, and social studies classes white males listen in silence to endless charges against white males, afraid to show any dissent. Indeed, under the reign of Identity Politics, the entire purpose of universities today is to demonize the white male. No white male is safe, not even deans of schools, and certainly not professors. A business school professor told me he received a warning for using the word “girls.” Jack Trotter writing in the August 2018 issue of Chronicles tells the story of being summoned to a meeting with his dean and the 30-year old female head of the university’s Diversity Office. Trotter had used the term “Anglo-Saxon” as an example of concise words as compared to “abstract, Latinate terms” in a lecture on concision in writing. A black female student concluded that Trotter’s preference for Anglo-Saxon words indicated racism and made her uncomfortable.

The dean kept looking uncomfortably at the Diversity Officer and told Trotter that the absurd charge would go into his personnel file in case there were further infractions. Trotter realized that universities are now in the hands of people “sniffing out diversity infractions, harassment claims, speechcode violations, microaggressions, toxic masculinity, and white privilege,” and were not places for white men to be. Perhaps the problem of the Catholic University and Georgetown presidents is that they are only figureheads.

There is, of course, the possibility that UMass and Catholic University are making cynical use of “sensitivity” to remove a football coach whose previous winning streak has departed and to increase “inclusiveness” at Catholic University by replacing Dean Rainford with the assistant dean who is female. Regardless, it is now an established fact that white males do not have the same range of freedom of speech that females have. What Identity Politics needs to explain is how is it that the easily persecuted white males constitute a ruling class of exploiters. Why are white males the ones who feel least welcome in universities and are the only ones who are punished?

This article was originally published at PaulCraigRoberts.org on October 3, 2018.