The Democratic Party Comes Out Against Foreign Military Bases 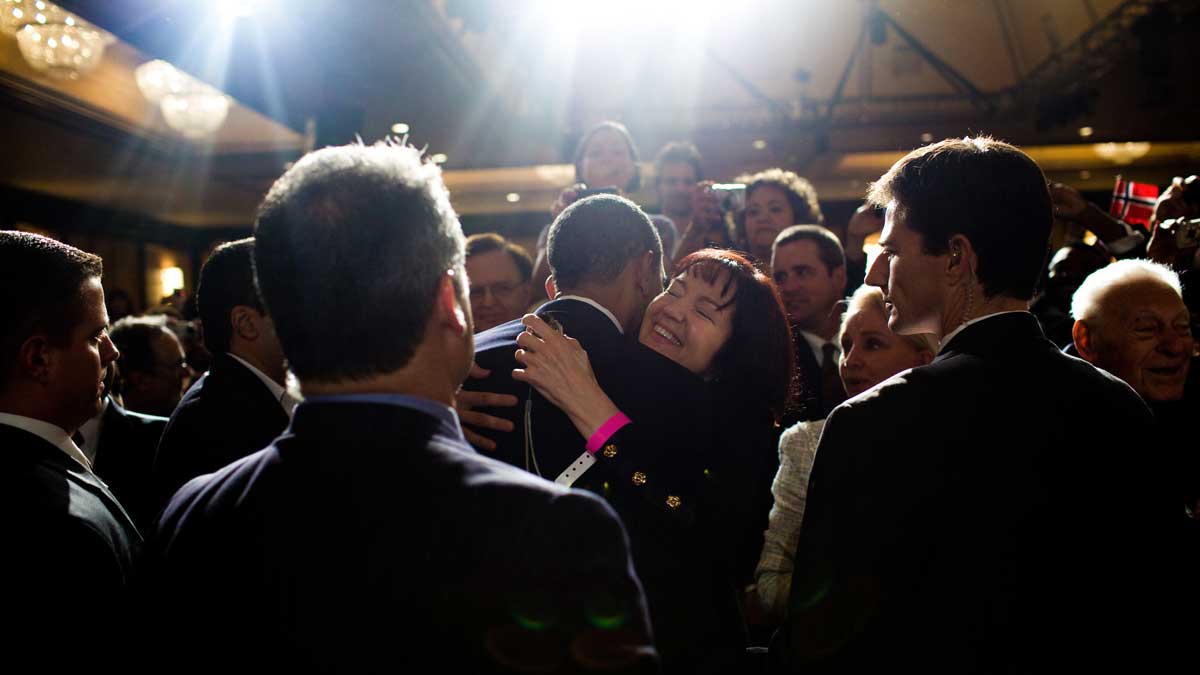 President Barack Obama, who by the end of his second term had bombed more than half a dozen countries, greets guests at a Democratic National Committee reception on October 15, 2009. (White House)

If I were to accept the theory that the Democratic Party had a soul that could be reclaimed, I would recommend rediscovering wisdom from the 1900 platform.

“We hold that the Constitution follows the flag, and denounce the doctrine that an Executive or Congress deriving their existence and their powers from the Constitution can exercise lawful authority beyond it or in violation of it. We assert that no nation can long endure half republic and half empire, and we warn the American people that imperialism abroad will lead quickly and inevitably to despotism at home.

“Believing in these fundamental principles, we denounce the Porto Rican law, enacted by a Republican Congress against the protest and opposition of the Democratic minority, as a bold and open violation of the nation’s organic law and a flagrant breach of the national good faith. It imposes upon the people of Porto Rico a government without their consent and taxation without representation. It dishonors the American people by repudiating a solemn pledge made in their behalf by the Commanding General of our Army, which the Porto Ricans welcomed to a peaceful and unresisted occupation of their land. It dooms to poverty and distress a people whose helplessness appeals with peculiar force to our justice and magnanimity. In this, the first act of its imperialistic programme, the Republican party seeks to commit the United States to a colonial policy, inconsistent with republican institutions and condemned by the Supreme Court in numerous decisions.

“We demand the prompt and honest fulfillment of our pledge to the Cuban people and the world that the United States has no disposition nor intention to exercise sovereignty jurisdiction, or control over the Island of Cuba, except for its pacification. The war ended nearly two years ago, profound peace reigns over all the island, and still the administration keeps the government of the island from its people, while Republican carpet-bag officials plunder its revenues and exploit the colonial theory, to the disgrace of the American people.

“We condemn and denounce the Philippine policy of the present administration. It has involved the Republic in an unnecessary war, sacrificed the lives of many of our noblest sons, and placed the United States, previously known and applauded throughout the world as the champion of freedom, in the false and un-American position of crushing with military force the efforts of our former allies to achieve liberty and self-government. . . .

“The greedy commercialism which dictated the Philippine policy of the Republican administration attempts to justify it with the plea that it will pay; but even this sordid and unworthy plea fails when brought to the test of facts. The war of ‘criminal aggression’ against the Filipinos, entailing an annual expense of many millions, has already cost more than any possible profit that could accrue from the entire Philippine trade for years to come. Furthermore, when trade is extended at the expense of liberty, the price is always too high. . . .

“We are in favor of extending the Republic’s influence among the nations, but we believe that that influence should be extended not by force and violence, but through the persuasive power of a high and honorable example.

“The importance of other questions, now pending before the American people is no wise diminished and the Democratic party takes no backward step from its position on them, but the burning issue of imperialism growing out of the Spanish war involves the very existence of the Republic and the destruction of our free institutions. We regard it as the paramount issue of the campaign. . . .

“We oppose militarism. It means conquest abroad and intimidation and oppression at home. It means the strong arm which has ever been fatal to free institutions. It is what millions of our citizens have fled from in Europe. It will impose upon our peace loving people a large standing army and unnecessary burden of taxation, and will be a constant menace to their liberties. A small standing army and a well-disciplined state militia are amply sufficient in time of peace. This republic has no place for a vast military establishment, a sure forerunner of compulsory military service and conscription. . . . ”

A few caveats: This was the party’s platform in 1900, 118 years ago. I’ve omitted a good bit of nasty racism and bigotry and contradictory imperial paternalism including support for the Monroe Doctrine. Neither party in 1900 condemned the war that stole half of Mexico. Neither even thought of the endless wars against Native Americans as real wars. The colonists that became the United States had attacked and conquered territory from the French and Spanish even before becoming a country, and that tradition ran deep.

But in 1900, everybody pretended that imperialism was new. And one party was for it, and the other — as quoted here — against it. And if the Democratic nominee, William Jennings Bryan, hadn’t insisted on putting “free silver” into the platform, the election of 1900 would have been a referendum on imperialism. And the Democrats were on the right side, as no Big-Two party has been before or since.

The Democratic Party of 2018 stands against sexism and racism and bigotry to a great extent, enough to correct the errors of the 1900 platform. But when it comes to bombing and occupying dark foreign people, the party of 2018 is gung ho. In fact, Democrats led the push in Congress to forbid Donald Trump ever withdrawing any occupying troops from Korea.

So, if I were to accept the theory that the Democratic Party had a soul that could be reclaimed and so on, I would recommend rediscovering the wisdom of the 1900 platform and joining the current campaign to shut down foreign military bases.

This article was originally published at DavidSwanson.org on September 26, 2018.