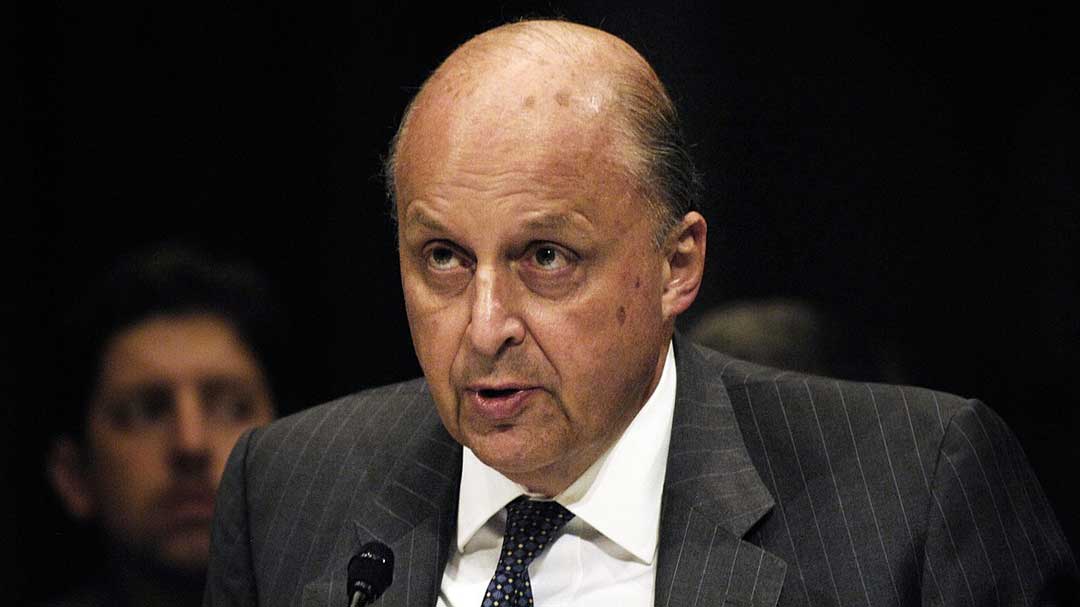 John Negroponte as Deputy Secretary of State testifires before the Senate on September 26, 2007. (Department of Defense/Public Domain)

The University of Virginia’s Miller Center caught flak for appointing Trumpian Marc Short, but has now announced the appointment of John Negroponte, presumably hoping for little resistance since Negroponte’s not a Trumpman.

But shouldn’t morality still matter? Shouldn’t a center that has yet to ever feature an opponent of war but keeps inviting mercenaries and soldiers and warmongers to speak have to have some limits? We’re talking about a man who oversaw death squads in Honduras and Iraq, a person with blood up to his shoulders who mass-murdered for disastrous ends in unjust causes. Negroponte was National Security Council Director for Vietnam back when the United States was still bombing Vietnam. He was in on Iran-Contra. Is there an expiration date on giving a damn?

Negroponte was U.S. Ambassador to Honduras when military “aid” jumped from $4 million to $77.4 million per year. Here’s what Noam Chomsky told Democracy Now!, where, unlike the Miller Center, he has been invited to speak:

NOAM CHOMSKY: The sub-heading–it says: “Negroponte Has Tricky Mission”. Then, the sub-heading is: “Modern Pro Consul”. It begins by saying as ambassador to Honduras in the 1980s, Negroponte was known as the Pro Consul, a title given to powerful administrators in colonial times. Now he has been chosen to take up that same role in Iraq, assuming — there’s one problem — assuming that the Pentagon is willing to cede its control. The big question is whether the Pentagon will control Iraq after they retransfer full sovereignty to them, or whether the Pro Consul, the Modern Pro Consul will run Iraq the way he ran Honduras.

I don’t know if it’s a coincidence or not, but a day or two after Negroponte’s appointment was announced, the government of Honduras withdrew its forces from Iraq. There are not many, a couple of dozen, I guess, but it might have been a coincidence. Or maybe they remember something from what happened there, the kinds of things that Amy was telling you about.

He did have a job — he had quite an embassy there, not the size of the one he’s going to be running in Iraq, but in Honduras, which, as you know, is a centerpiece of world power. He had a huge embassy with 1,000 people. I’m sorry, that’s — he had a huge embassy, and he ran one of the biggest embassies in the country, in the world, and he also had the biggest C.I.A. station in the world in Honduras — obviously a terribly important place for the C.I.A. to concentrate.

He had two jobs there. The article explains–one was to insure that Congress didn’t get upset about the fact that the Honduran security forces were carrying out tortures and massacres of the famous Battalion 316 that Amy was talking about. He had to deny those so that the military aid would keep coming for him to be able to carry out his major task, which was, of course, supervising the Contra Camps in Honduras from which the C.I.A., the Mercenary Army was attacking Nicaragua–not a small affair.

The death toll in Nicaragua from the U.S. terrorist war based in Honduras per capita relative to population would be the same as about 2 1/2 million dead in the United States which turns out to be higher than the total number of American deaths in all wars in U.S. history, including the Civil War.

So, from the Nicaraguan point of view, this was not a small event. It did lead to establishing democracy with a gun at their heads after Bush warned them that this was going to go on, unless they vote for our candidate. This was Bush number 1. The Nicaraguans voted for the U.S. candidate and were rewarded by that with tremendous applause in the United States. The New York Times ran big headlines saying “Americans United In Joy” kind of like North Koreans. Americans united in joy at the victory for U.S. fair play. You know, that’s pretty much what happened.

Since then — since the U.S. took it over again, Nicaragua declined to the second poorest country in the hemisphere after Haiti. Again, by accident, Haiti happens to be the main target of U.S. military intervention in the 20th century. Nicaragua was second. But that’s just another coincidence. About 60% of the Nicaraguan children under two are now suffering from severe anemia from malnutrition. You will guess they probably have permanent brain damage and half the active labor force is out of the country because there’s no way to survive there.

It’s described in the “Wall Street Journal” as an economic miracle where you can buy anything that you want. That’s true. There are 24-hour malls open for people that can afford it, and then you can buy computers and plenty of great things — great place for retired Americans to go. They can live very cheaply in wonderful mansions and so on. But for children under two, the prospects are permanent brain damage. That’s what we call victory for democracy.

So, that tells you something about the Bushes’ Messianic vision to bring democracy to Iraq using the same experienced official, and we don’t have to go on about the kind of democracy that he wrote to Honduras or that the present incumbents and their Reaganite phase brought to the rest of Central America that we’re supposed to forget about.

In fact, the results for Iraq were worse.

This article was originally published at DavidSwanson.org on September 4, 2018.