Patriotism Has Been Turned Against Patriots 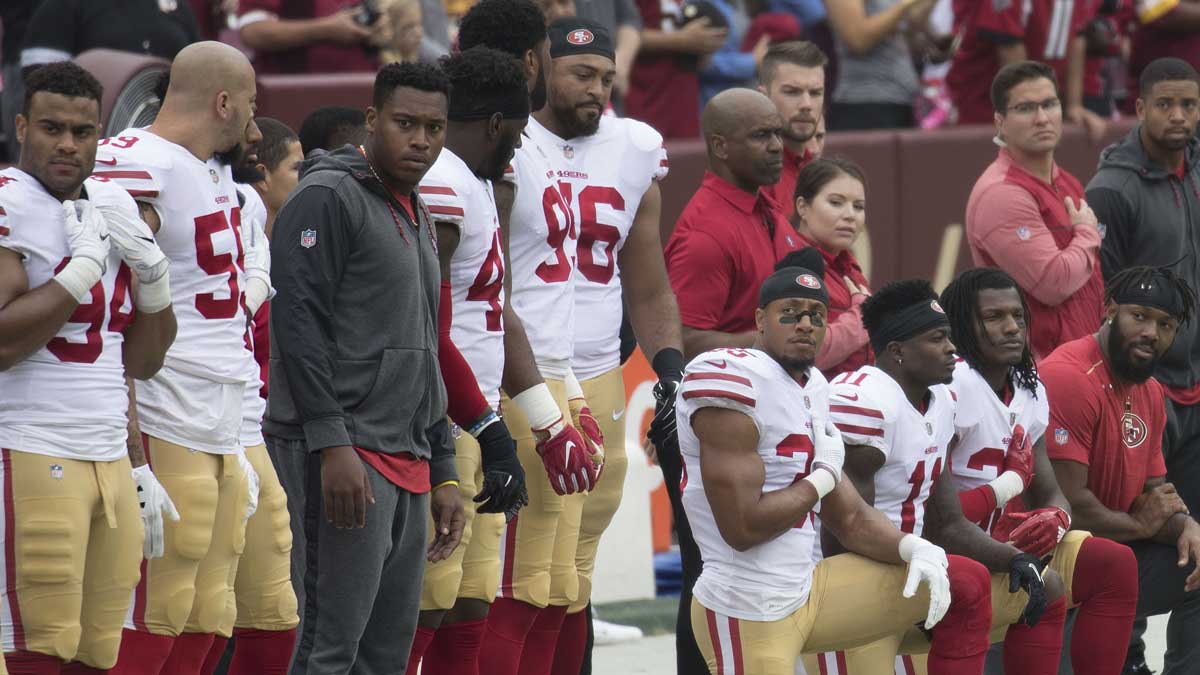 Some members of the San Francisco 49ers kneel during the national anthem before a game with the Washington Redskins in Landover, Maryland, on October 15, 2017 (Keith Allison/CC BY-SA 2.0)

Those who rule us want all protests to occur on an isolated street corner where police can taser and beat the protester without any public notice.

To understand how screwed-up America is, consider that patriotism is now associated with the suppression of dissent.

Rich football team owners, who know nothing of the hard lives of most Americans, and the police, who routinely shoot down black people in the streets and in their homes without accountability or due process, are incensed that three Miami Dolphin players kneeled last week during the national anthem to protest the unaccountable police murders of black US citizens.

The Broward County Police Benevolent Association rushed to cut off its nose to spite its face by announcing that it will no longer be part of the Dolphin’s discount ticket program. Now if a cop wants to go to a game, he has to pay full price.

Moveover, the protests get noticed and cause Americans to wonder what has happened that is so disturbing that black professional athletes risk their highly paid livelihoods for the sake of a public protest. Colin Kaepernick, who originated the protests was fired as quarterback of the San Francisco 49ers for exercising his constitutional rights and has been blacklisted by rich NFL team owners.

Those who protest the protesters are the unAmericans. They are the stupid agents of those who have turned America into a police/warfare state that neglects the needs of its own people in order to serve the greed of the military/security complex and global exploitative corporations.

I am always discouraged when ordinary Americans, themselves victims of the system, say, “well, they can protest but not during the anthem or at a public event.” Those who say this have no idea what an American is.

As Americans themselves no longer know what it means to be an American, little wonder they have lost their country.