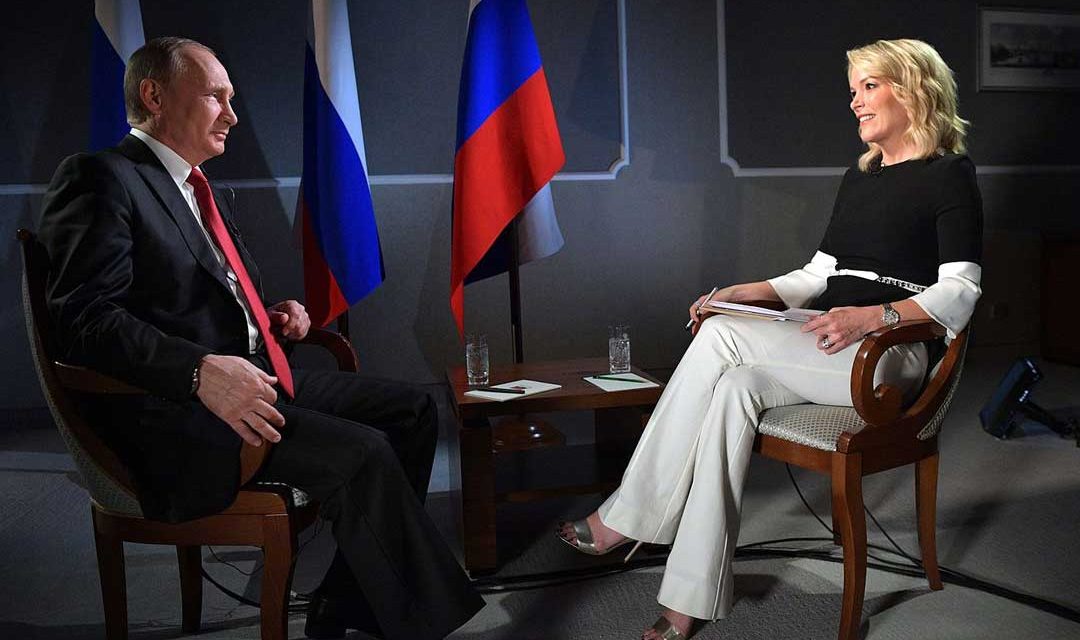 Vladimir Putin interviewed by Megyn Kelly on June 5, 2017 (The Kremlin)

How can even Russians believe that there is a chance for improved relations with the US while Washington persists in slinging evidenceless accusations and otherwise demonizing Russia and its president, Vladimir Putin?

I have often wondered if the Russian media shields Russians from the insulting and derogatory things that American elites say about Russia and President Putin.

For example, here is Harvard University Professor Graham Allison: “However demonic, however destructive, however devious, however deserving of being strangled Russia is, the brute fact is that we cannot kill this bastard without committing suicide.”

Here is Bloomberg News: Interpol “should be issuing more international arrest warrants for Russian officials implicated in assassinations abroad. Ideally, Russia would find itself in the same position as outlaw states like Iran. . . . This should include designating Russia as a state sponsor of terrorism.”

Here is a collection of insulting and demonizing statements about Russia assembled by Professor Stephen Cohen.

Despite the ongoing demonization of Russia and her president and the crazed Nikki Haley’s recent statement to the UN that Russia will “never be America’s friend” and that America will “slap them when we need to,” extraordinary delusion still shows itself in Russian media organizations. Even RT, whose Washington broadcasts were recently closed down by Washington, thinks “there could be signs of improvement on the horizon” and reports that “President Putin, as well as several Russian officials, has continuously signaled Moscow’s readiness to improve ties with the US and the West, based on trust and respect.”

What respect? What trust?

After the long and ongoing list of false accusations—Skripal poisoning, Malaysian airliner shotdown, invasion of Ukraine, planned invasion of the Baltics, a dozen or more alleged assassinations in the UK, sanctioning Assad’s alleged use of chemical weapons, coverup of Iran’s alleged nuclear weapons, etc., topped off with gratuitous sanctions piled upon sanctions, and seizure of Russian property, etc.—how can Russia possibly trust Washington or any Western government?

I wonder if Putin understands that Washington is doing everything in its power to have him assassinated.

This article was originally published at PaulCraigRoberts.org on March 6, 2018.