Ahed Tamimi’s Generation: Why the Youth in Palestine Must Break Free from Dual Oppression 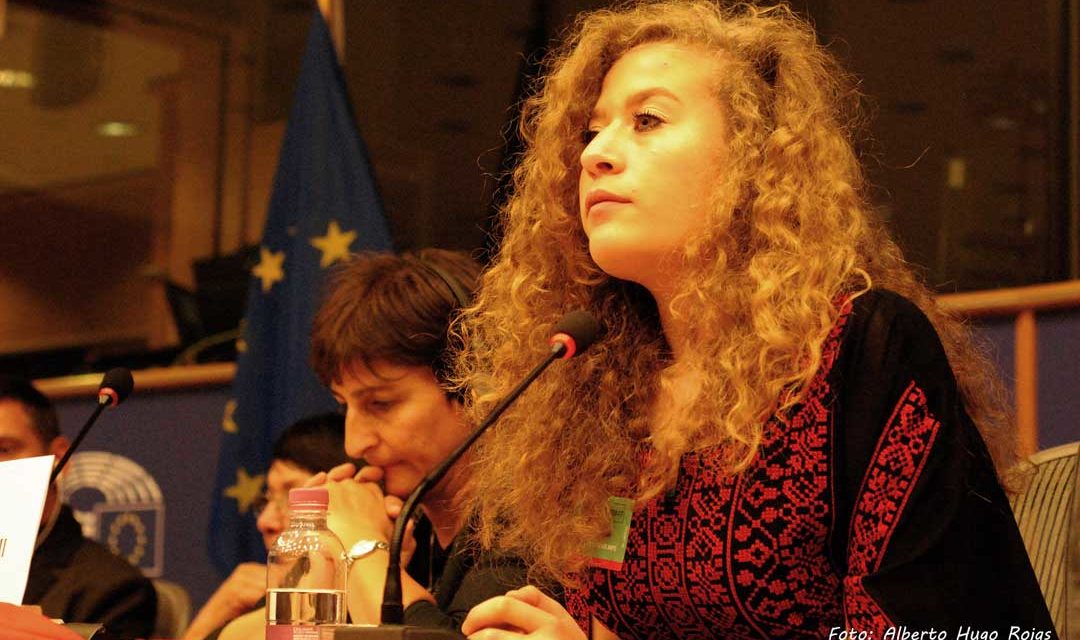 Ahed Tamimi at a conference on the role of women in the Palestinian popular struggle, February 3, 2006. (Alberto Hugo Rojas/CC BY-SA 2.0)

Ahed Tamimi epitomizes the antithesis of everything that the Palestinian Authority stands for. She is strong, morally-driven and defiant; the PA is subservient, morally bankrupt and quisling.

Those who were detained on February 26 include Ahed’s 15-year-old cousin, Mohammed Tamimi.

Israeli troops had shot Mohammed in the head last December, shattering his skull. The teenager, who is awaiting reconstruction surgery, is unlikely to receive proper medical care in Israeli prisons.

Ahed’s crime was that she slapped an Israeli soldier in a video that, since then, went viral, shortly after her cousin was shot. He was then placed in a medically-induced coma.

The Israeli soldier who shot Mohammed did not receive even a reprimand for shooting-to-kill an unarmed boy.

The Israeli military provided an outrageous explanation of why the Tamimi family members, all hailing from the small village of Nabi Saleh, were detained in a pre-dawn army raid.

“The detainees are suspected of involvement in terrorist activities, popular terror and violent disturbances against civilians and security forces,” the Israeli military spokesperson said.

By ‘popular terror’, the statement was referring to the recurring protests led by the 500 residents of Nabi Saleh against the illegal settlements and Apartheid Wall. These protests have been a staple in the everyday life of the village for nearly 12 years.

Anywhere between 600,000 and 750,000 illegal Jewish settlers live in settlements placed strategically throughout the Occupied West Bank and East Jerusalem. They are a glaring violation of international law.

Aside from the massive Israeli army build-up in the Occupied Territories, the armed settlers have been a major source of violence against Palestinians.

Ahed and Mohammed Tamimi, along with hundreds of thousands of Palestinian children and teenagers, were born into this violent reality, and feel trapped.

Their collective imprisonment is not only as a result of the perpetual military occupation of their land by Israel, but also by the fact that their leadership has operated for many years in a self-centered fashion, orbiting far away from Nabi Saleh and its tiny, struggling but brave population.

Nabi Saleh is relatively a short distance away, northwest of Ramallah, the political base of the Palestinian Authority (PA); but in some way, both places are a world apart.

The PA was formed in 1994, as one of the outcomes of the Oslo Accords, which was initially reached and signed in secret by the Palestinian Liberation Organization (PLO) and Israel.

Most Palestinians in the Occupied Territories matured politically or were even born after the advent of the PA. They have no other frame of reference but Israel and the Ramallah-based authority.

The latter has grown comfortable by its wealth and status and, with time, evolved into a culture of its own. It is no longer a democratic institution, and definitely does not represent all Palestinians.

Thus, Palestinian reality is now shaped by three forces: the domineering Israeli occupation, the subservient and self-centered PA and the indignant and leaderless Palestinian youth, which is held captive in dual bondage.

This is why Ahed’s slapping of the Israeli soldier resonated throughout Palestine, and among Palestinians across the world. It was a symbol of defiance that, despite the twofold oppression, Palestine’s youth still have the power to articulate an identity, one that is, perhaps, captive but nonetheless resilient.

Although Mohammed’s skull is crushed, he continued to speak out as soon as left the hospital. The spirit of the Palestinian people is clearly not broken, and Palestine’s youth are the only way out of the double-walled cage.

That generation resurrected the Palestinian cause as they daringly organized their communities, mobilizing all efforts to challenge the Israeli occupation. Thousands were killed and wounded at the time, but an empowered Palestinian nation arose in response.

The Palestinian leadership used the Intifada to reinvent itself. It exploited the attention young Palestinians had garnered to negotiate Oslo, which ultimately gave some Palestinians special status and denied the rest any rights or freedoms.

The PA, led by aging President Mahmoud Abbas, understands well that if the youth are to be given the chance to mobilize, another Intifada would dismantle his entire leadership, possibly in a matter of days.

This is why, no matter how serious the disagreements between Abbas and the Israeli government become, they will always stay united against any possibility of a popular Palestinian revolt, led by the youth.

Numerous Palestinians have been arrested, imprisoned or tortured by Palestinian police in the years that followed the formation of the PA. The latter did so in the name of ‘national interest’ while, in reality, it was done in the name of Israeli security.

Indeed, Oslo has allowed both Israel and the PA to maintain ‘security coordination’ in the West Bank. This has mostly been used to keep the illegal settlements safe and to prevent Palestinian youth from confronting the Israeli army.

Such a practice has meant that the PA became a first line of defense against rebelling Palestinians.

While Palestinian officials continue to pay lip service to Ahed Tamimi and thousands of young Palestinians who continue to endure imprisonment and ill treatment by Israel, in truth, Ahed epitomizes the antithesis of everything that the Palestinian leadership in Ramallah stands for.

She is strong, morally-driven and defiant; the PA is subservient, morally bankrupt and quisling.

Palestinian youth already understand this, and it is mostly up to them to free themselves from the confines of military occupation and corruption.

In his seminal book, ‘The Wretched of the Earth’, anti-colonial author and revolutionary, Frantz Fanon wrote, “Each generation must discover its mission, fulfill it or betray it, in relative opacity.”

Ahed and Mohammed Tamimi’s generation have already discovered their mission, and it will be them who will continue to fight for its fulfillment—their freedom and the freedom of their homeland.

This article was originally published at RamzyBaroud.net on March 7, 2018.